In MOONSTRUCK, fantasy creatures live typical, unremarkable lives alongside humans, and barista Julie strives to be the most unremarkable of all. Normal job, normal almost-girlfriend, normal...werewolf transformations that happen when she gets upset? Yikes!

But all bets are off when she and her centaur best friend Chet find themselves in the middle of a magical conspiracy. Will Julie and Chet be able to save their friends? Is Julie's dogged determination to be normal a lost cause? Who's going to watch the coffee shop while our heroes are out saving the world??

A story of monsters, romance, and magical hijinks, the first arc of MOONSTRUCK also features a story-within-a-story illustrated by artist Kate Leth (Patsy Walker A.K.A. Hellcat, Spell on Wheels)!

“I'm extremely proud of MOONSTRUCK; it's definitely the best thing I've ever written,” said Ellis. “And it's full of things I like: It's fun, it's character-driven, it's got a lot of room for creativity, it's got queer people—not to mention mystical magic AND close-up card-trick magic. And lots of coffee! So if you like those things—a fun, slice-of-life character story with genre trappings—I imagine you'll like MOONSTRUCK a whole lot.”

“MOONSTRUCK is already near and dear to me, and I'm so excited to get it out into the world!” said Beagle. “Even in this world of magic and monsters, all the characters are relatable and lovable in their own ways. MOONSTRUCK is the lighthearted queer romance we've all been wishing for, with lots of magical flavor.”

Advance praise for MOONSTRUCK:
“Ludicrously pretty, enormously heart-warming; don't myth it.”
—Kieron Gillen (THE WICKED + THE DIVINE)
“Reading MOONSTRUCK is like watching a magic trick up close. Even as you pore over
Shae Beagle’s beautiful art and laugh at Grace Ellis’s sharp dialogue, you don’t
notice that you’ve sunk into a whole new world that’s packed full of weirdness but feels
cozy and lived in. Complete with fuzzy queer romances, mystery-solving sisters, and
spooky prophecies, MOONSTRUCK is a comic like no other and if it isn’t a huge hit, I’ll
be very mad at comics.” —Christopher Sebela (DEMONIC,
High Crimes) 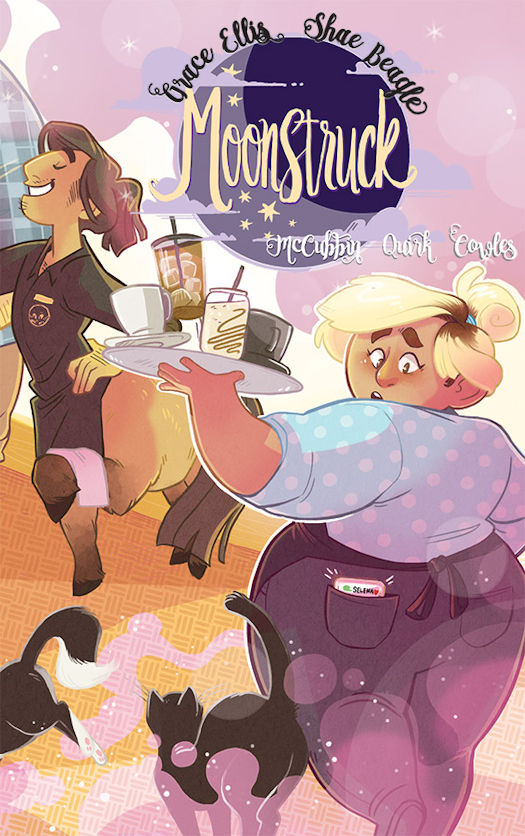