Review: All Systems Red (The Murderbot Diaries 1) by Martha Wells 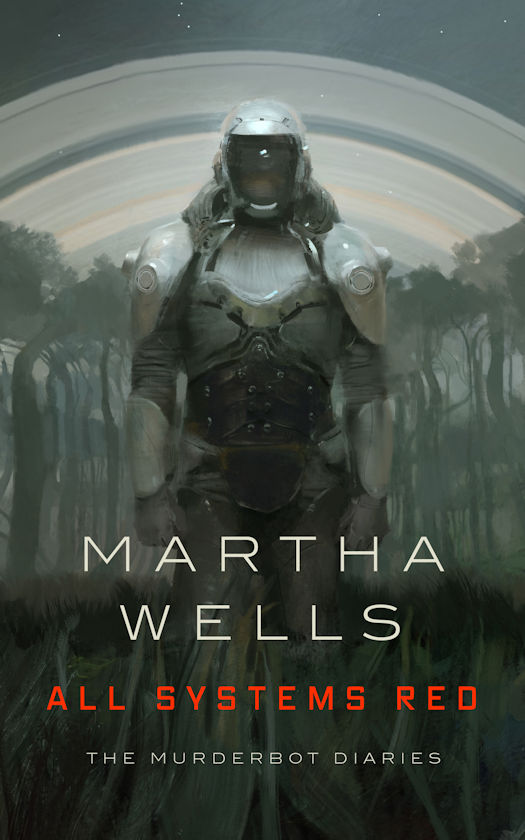 A murderous android discovers itself in All Systems Red, a tense science fiction adventure by Martha Wells that interrogates the roots of consciousness through Artificial Intelligence.

In a corporate-dominated spacefaring future, planetary missions must be approved and supplied by the Company. Exploratory teams are accompanied by Company-supplied security androids, for their own safety.

But in a society where contracts are awarded to the lowest bidder, safety isn’t a primary concern.
On a distant planet, a team of scientists are conducting surface tests, shadowed by their Company-supplied ‘droid — a self-aware SecUnit that has hacked its own governor module, and refers to itself (though never out loud) as “Murderbot.” Scornful of humans, all it really wants is to be left alone long enough to figure out who it is.

But when a neighboring mission goes dark, it's up to the scientists and their Murderbot to get to the truth.

All Systems Red is the first Murderbot Diaries novella by Martha Wells. I have always been fascinated by robots, androids, things related and in between. I now have a new favorite to add to my list - Murderbot from All Systems Red.

All Systems Red is told from the point of view of Murderbot, a self-given name after an unpleasant malfunction on a previous mission. Murderbot has hacked its governor module so it's under no one's control but its own. More than anything Murderbot would like to finish its daily jobs and get back to watching some of the 35,000 hours of movies, books, etc. it has downloaded.

Murderbot is both mechanical and organic with the ability to regrow and repair via the help of the MedSystem. It's a SecUnit - Security Unit - hired out to various missions to protect those who hire it. It's not a robot but an android.

On this particular mission Murderbot is contracted for by PreservationAux who had bought an option on the resources of the planet they are on. This is a survey trip to see if they should bid on a share of the planet's resources. Things start to go awry when another group on the planet is killed by what appears to be rogue SecUnits. Murderbot and those it's protecting need to figure out what is going on and get off the planet before they too are killed.

All Systems Red is simply wonderful. Wells fits so much into this story - mystery, action, thrills, and more. The story and writing are superb with great world and character building. Wells has created an iconic character with Murderbot; a character who will explore the issue of what it is to be human. I am looking forward to more Murderbot Diaries.