Please welcome the fabulous Chelsea Mueller to The Qwillery as part of the 2017 Debut Author Challenge Interviews. Borrowed Souls was published on May 2nd by Talos. 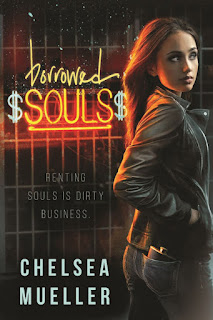 Chelsea:  Thanks, Sally. I've been a fan of this blog for so long. Very happy to be here.

I've always been a writer. (Every author says that, don't they?) I actually started as a journalist, though. I worked for magazines and newspapers for many years, before moving into another field. I found myself missing writing every day. I was already a voracious reader of genre fiction, and so I found myself beginning work on novels in every bit of spare time I could find. (Still do.)

Chelsea:  Officially, I'm a pantser, but I leverage a kind of tentpole writing. I usually know the core threads of the book. So I know the beginning, middle, and end for each of those plot threads and the key turning points, but how they're all connected is discovered during the writing process.

Chelsea:  Picking the right story to tell. I have no shortage of ideas, but finding the one that needs to be told and that has the right kind of heart is the trick. This is especially challenging, as I'm a rather determined person (#Slytherin) and will finish something once I've started it.

TQ:  What has influenced / influences your writing? You've been reviewing books for years at Vampire Book Club, which you founded. How does this influence your own writing?

Chelsea:  I think just about everything can influence us as people and as artists. My work at Vampire Book Club helped me see so much of what worked and what didn't. More importantly, though, it underscored that there is a niche for every book, and let me have confidence in writing the kind of book I would absolutely love—a gritty, dark urban fantasy with magic and big problems and a hot dude on a motorcycle.

TQ:  Tell us something about Borrowed Souls that is not found in the book description.

Chelsea:  While the book is definitely gritty and sexy—which you get from the blurb—it's also a little funny. I promise there's a scene where the biker mentioned in the blurb and Callie go bellydancing. I don't promise it goes to plan, but expect some hips that don't lie.

TQ:  What inspired you to write Borrowed Souls?

Chelsea:  BORROWED SOULS was spawned from the idea of the Soul Charmer, the man who people in Gem City rent souls from. I had this vivid image of him in my mind and of his creepy shop. From there furled the idea of why magic like that would be needed and what would make a person use it.

TQ:  What sort of research did you do for Borrowed Souls?

Chelsea:  BORROWED SOULS is set in a modified version of a southwestern city. Everything in Gem City—from concerns about light pollution and vagrancy to omnipresent religious references—is based on a real world setting.

Chelsea:  Isn't the cover fantastic? All credit to it goes to Jeff Chapman. The model looks almost exactly as I'd pictured heroine Callie, and that flask in her back pocket is a key feature in the book. Wait until you find out what she's carrying in it!

TQ:  In Borrowed Souls who was the easiest character to write and why? The hardest and why?

Chelsea:  The book is written from Callie's point of view, and I can snap into her mindset in a second. She has a very firm set of principles and some serious guilt on her head, but a huge heart. The character arcs are my favorite, but Callie's brother Josh may be the most "difficult." If only because he tries to take advantage of Callie and doesn't recognize how blatant it is.

TQ:  Which question about Borrowed Souls do you wish someone would ask? Ask it and answer it!

Chelsea:  I keep waiting for people to guess what city Gem City is based on, but all I'll say is look to the southwest!

TQ:  Give us one or two of your favorite non-spoilery quotes from Borrowed Souls.

Chelsea:  This one is one of my favorites, especially as everyone who has read it has told me which liquor they had the quintessential "bad experience" with and can no longer drink!

"In the hierarchy of booze-as-medicine-for-emotional-woes, it clearly went beer, wine, rum, vodka, tequila, and then whiskey. However, depending on your defining experiences, one could, possibly, swap the top three into almost any order."

Chelsea:  Next I'm hanging out with everyone! I'll be at the RT Booklovers Convention in Atlanta May 2-6 (including signing at the big, public book signing on May 6), and then I'm hitting the road for a small book tour. If you live in Dallas, Houston, Phoenix, or Austin, check my schedule and come say hi!

I'm finishing up a contemporary fantasy novel, but also working on STOLEN SOULS—yes, that's the sequel to BORROWED SOULS, and it's already so much fun to write.

Chelsea:  Thanks for having me! 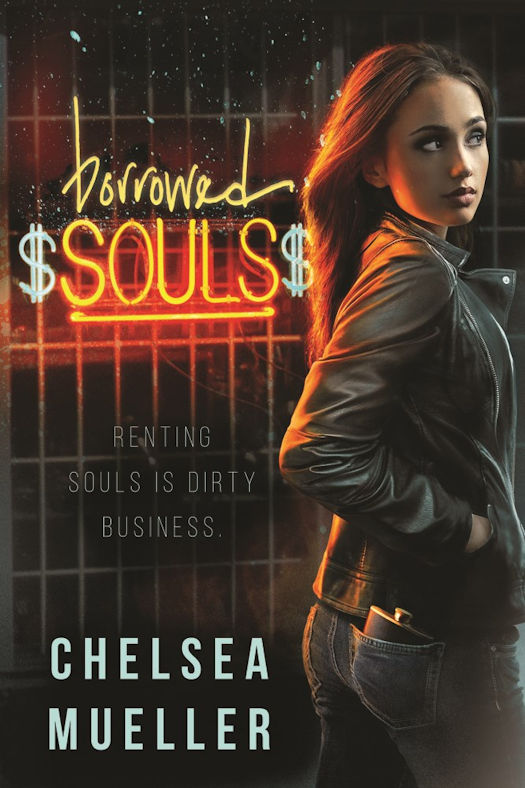 Callie Delgado always puts family first, and unfortunately her brother knows it. She’s emptied her savings, lost work, and spilled countless tears trying to keep him out of trouble, but now he’s in deeper than ever, and his debt is on Callie’s head. She’s given a choice: do some dirty work for the mob, or have her brother returned to her in tiny pieces.

Renting souls is big business for the religious population of Gem City. Those looking to take part in immoral—or even illegal—activity can borrow someone else’s soul, for a price, and sin without consequence.

To save her brother, Callie needs a borrowed soul, but she doesn’t have anywhere near the money to pay for it. The slimy Soul Charmer is willing to barter, but accepting his offer will force Callie into a dangerous world of magic she isn’t ready for.

With the help of the guarded but undeniably attractive Derek—whose allegiance to the Charmer wavers as his connection to Callie grows—she’ll have to walk a tight line, avoid pissing off the bad guys, all while struggling to determine what her loyalty to her family’s really worth.

Losing her brother isn’t an option. Losing her soul? Maybe. 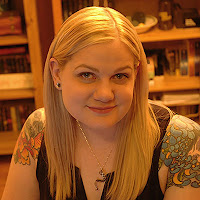 Chelsea Mueller writes gritty fantasy and YA novels packed with lots of action and a steady undercurrent of sexual tension.

She spends too much time at the gym practicing MMA skills, but makes up for it by counseling other authors on writing dynamic and realistic fight scenes. Get those tips in her Write Like a Fighter series.

When not crafting tales full of ass-kicking and kissing, she runs the totally fun blog Vampire Book Club, dishes on the latest book and TV hotties for Heroes & Heartbreakers, and hangs out with her awesome husband and two giant dogs. She loves bad cover songs, dramatic movies and TV vampires.

She lives in Texas and has been known to say y’all.