To TBR or To Not TBR

I have over 500 books in my To be Read pile. Technically it's not a pile. It's really a bunch of boxes and bags filled with books. I keep track of my TBR using Readerware. It comes with a barcode scanner, which makes it incredibly easy to add books. Each box has a number on it. The numbers correspond to a set of books on the TBR list. That worked for a while. The problem is that I keep buying books. The new books are in bags. They are waiting for me to put them in the appropriate box. It's an endless loop. I buy more books, I reprint the list, I rearrange the boxes, etc. Once read the books move to another set of boxes. Those books are waiting for me to set up my new office. After that the books will be sorted and somehow fit onto bookshelves. My new office already holds nearly 1,000 cookbooks. I may need more bookcases or consider putting bookcases somewhere else in the house. I don't like getting rid of books. When I moved overseas in the mid-90s, I had to get rid of 1/2 of my books. I don't think I've ever gotten over that. I pine for my English-Russian and Russian-English dictionaries.

So I have a dilemma of sorts. Do I stop buying books until I catch up with my reading sometime in the next 30 years? Do I continue to buy books to support the authors that I like to read especially during this time of economic uncertainty? And do I keep everything?

I decided that yes, I will continue to buy books and support authors because I want them to be able to keep writing more books for me to read. Does one book sale make a difference? I don't know the answer to that, but I'd like to think that every book sold helps. I know that there are at least 3 new releases that I will buy this week: Mario Acevedo's Jailbait Zombie, Mark Henry's Road Trip of the Living Dead, and Anton Strout's Deader Still. These three books will be released on February 24, 2009. I need to look at my To Be Bought list for the rest of the month.

I've also decided to keep everything for the time being. My 13 year old daughter has recently become hooked on paranormal YA. In a few years she'll be old enough to read the grown-up books. Then she can worry about where to store them.

Qwill's Qwestions: Have your book buying habits changed over the last few months? Do you keep everything? What books are you buying in February 2009?

You can join the Mark Henry's Glamazombies Yahoo Group here:

This may or may not be a blog post

I'm really really busy and my small humans are on vacation from school.

Somebody explain to me why they can't have 2 weeks off at the holidays instead of a week in February? They have no time off in March and then a week again in April. School is out in mid-June. I've been told that 1) the teachers need the February break and 2) the break is necessary to avoid seasonal illnesses. I'm not a teacher so I don't know if they really NEED a week off in February. I know that teaching is a very challenging and difficult job. But if we go by that criteria lots of people should have a lot more vacations! I was also unaware that seasonal illnesses peaked in the 3rd week of February each year. I find that argument for a February break to be a bit on the suspect side. I've never seen anything that backs this up. My experience is, with just 2 kids in school, that seasonal illnesses are around for the entire season. But I'm not an epidemiologist, so really don't know what illness distribution is during the winter season.

And while I don't understand why my small humans have a vacation this week, I have to say that I'm glad they are home! Even with all the noise, distraction, bickering, not listening (this list is endless!), I like having them home. I feel joy when they are around.

So now that I have not blogged, I'm going to go see what the small humans are doing (it's noisy, whatever it is), give them some hugs, and take them to the bookstore. I'll bring them back home with me also. ;)

Some recent pictures of the small humans:

Daughter with Sherrilyn Kenyon at NYCC (notice the horns) 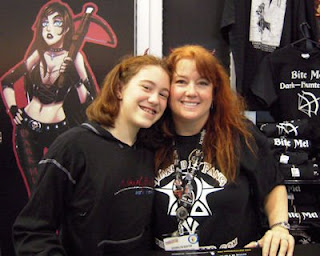 Son on the train to NYCC 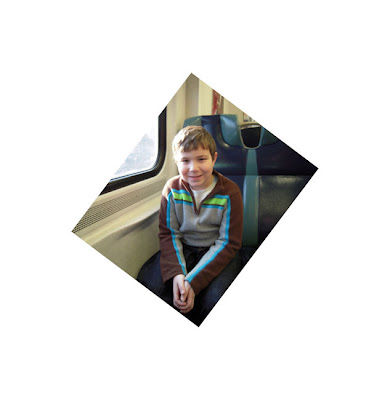 Qwill's Qwestions: Do your small humans have an odd vacation schedule? or Just leave a comment!

Never take the bus when you can take the train

This past weekend I covered New York Comic Con for WiiCommunitii.com. Since I live in Connecticut, there are a variety of ways to get to New York City. I could drive or take the bus or train. There is also the limousine option, but at $175 each way that was not really an option. Driving is out also because I am not taking my convertible into the City.

I usually take the train even though it's a 20 to 30 minute drive to the station with the best service. On Friday though I decided to take the bus because it leaves from the next town. The bus takes a bit longer than the train ride itself. However, if you add in driving to the train station, the trip via train and bus take about the same amount of time.

First thing that was not right - the bus waiting area is permanently closed so I had to wait outside in 12F degree weather. This is because, for some reason known only to the powers that be at the bus company, the bus stops on the side of the building that is furthest away from the parking lot. So I could not wait in my car and dash out to the bus over the unplowed and icy parking lot. There's a Dunkin' Donuts on the parking lot side of the building as well so I would have happily waited there At least at Dunkin' Donuts I could have had a nice hot coffee while waiting. But again that would require running around the entire building on ice to get to the bus after it pulled in. I should not complain too much though. I had considered taking the 7:30 a.m. bus. It was still sitting there broken down when the 9:00 a.m. bus (that I took) left what passes for the terminal.

First thing that I learned - if your bus driver is wearing a short sleeve shirt when it's 12F out, the bus will be incredibly overheated. The bus was so hot, it was nauseating. I removed the clothing I could without being arrested for indecent exposure. In other words I took off my coat. No one was more thankful than I to pull into Port Authority in NYC! I walked in the freezing cold to the Con. I needed the fresh air.

I had an extremely productive day at New York Comic Con. And then the dreaded bus ride home...

Second thing that I learned - if people are told to use their cell phones only for emergency calls, they will use them at will. I was exhausted and all I wanted to do on the ride home was catch some zzzzzzs. So the person behind me gets a call. She tried to be quiet about it but failed. Granted she did not stay on long, but it woke me up. Soon after as I was dozing off again, the person in front of me made a call. He was loud. So loud that the bus driver got on the mic to tell him to get off the phone. Finally I hoped that I might be able to sleep. NO! The woman across from me decided to text up a storm, which would have been fine if her keys were set to make no noise. I know that you can turn that sound off. In her case I believe that she set her keys to make the maximum noise. Sigh. So no sleep.

Third thing that I learned - if your bus driver is wearing a warm coat, the bus will be too cold. I actually had chills on the way home. I needed a blanket. I had not brought one with me.

Fourth thing that I learned - people should not be allowed to eat on buses. The woman behind me brought some sort of salad with her. When she opened the container, the smell was horrid. I've no idea what the meat in that salad was. I do know I never want to encounter it again. Worse however was the lettuce. Iceberg lettuce. She chewed with her mouth open. It was very very noisy. Why not choose a salad with mixed leafy greens? At least those are quiet!

I was ecstatic when the bus trip ended. I couldn't care that I had to walk over ice and snow to get to my quiet car on the other side of the terminal. I will never take the bus again. It's too small a place with no escape, and people are simply too rude. I'm sticking with the train.

Qwill's Qwestion: What's your worst travel experience?
Posted by Qwill at 7:06 AM 5 comments

Punxsutawney Phil has seen his shadow, which means 6 more weeks of winter. I don’t think we needed Phil to tell us that this year. This is the first winter in a long, long time that seems like a “real” New England winter. More snow is expected tomorrow. I would have liked the ice that is still covering parts of the driveway to have melted before it snows tomorrow, but it’s too cold for much melting today. And once again my thoughts turn to Spring and my gardens because the planning starts now. I’ve ordered several plants for Spring delivery including a beautiful new Dianthus deltoides called ‘Cherry Red.’

I love Dianthus or Pinks almost as much as I love Echinacea. Pinks come in a wide variety of colors and patterns. They are perfect edging plants. 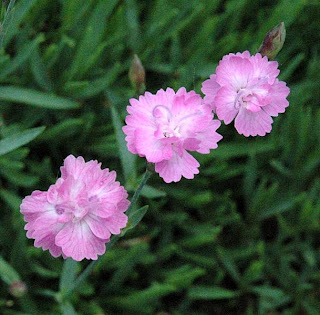 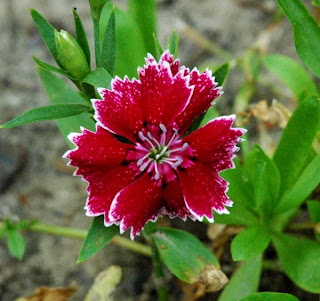 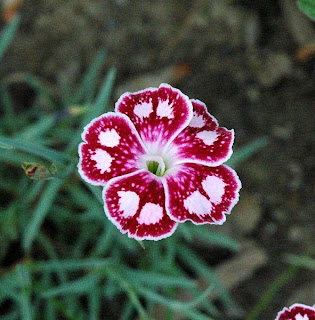 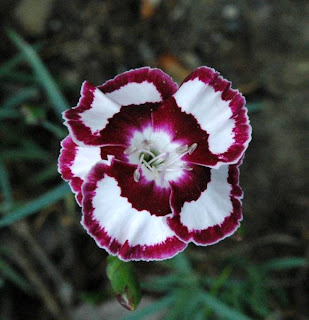 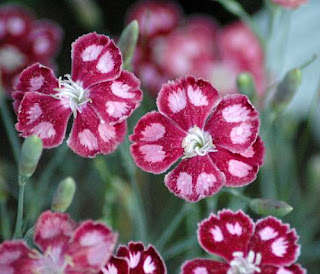 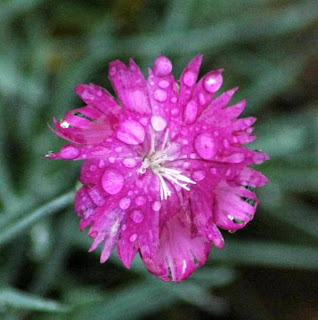 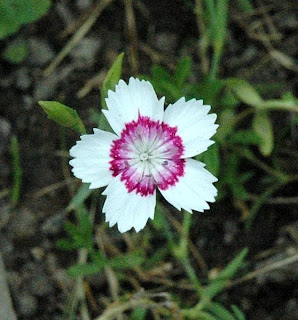 I can't imagine my gardens without Dianthus. They are little jewels. I'm looking forward to Spring and gardening!

Qwill's Qwestion: What are you most looking forward to when it's Spring?