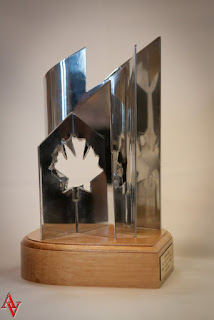 The 2017 Aurora Awards Ballot has been announced by the Canadian Science Fiction and Fantasy Association.


What are the awards?
The Aurora Awards are kind of like the Peoples Choice awards for Science Fiction, Fantasy and Horror, except just for Canadians.  There are twelve categories, some of them for literary works, and some of them for amateur or what we call Fan works.  All Canadians may nominate or vote for the awards.  Each year’s awards are for original works or activites done by Canadians in the previous calendar year.

This ballot is for works done in 2016 by Canadians. The Aurora Awards are nominated by members of the Canadian Science Fiction and Fantasy Association. The top five nominated works were selected. Additional works were included where there was a tie for fifth place.

Best of the Decade
This is a special category for this year’s awards for works published between January 2001 and December 2010. Note: Items in italics are for multi-volume works. Multi-volume stories were considered if they began prior to 2001 but ended before or close to 2011. We defined a multi-volume story as one with a continuous narrative. Finalists were chosen by an eight-person jury from across Canada. The winner will be chosen by our membership’s votes.