Interview with Isabelle Steiger, author of The Empire's Ghost


Please welcome Isabelle Steiger to The Qwillery as part of the 2017 Debut Author Challenge Interviews. The Empire's Ghost was published on May 16th by Thomas Dunne Books. 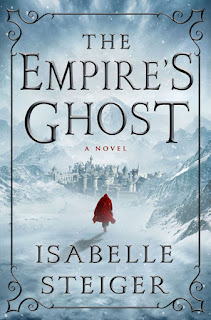 Isabelle:  I’ve wanted to write stories since I was five, so the writing itself was something of a foregone conclusion after that. I started actually writing, as opposed to simply daydreaming, when I was about eight, largely because I’d been given a really awesome notebook as a present. It was very big, and had lots of intriguing zippers and pockets.

Isabelle:  Definitely a hybrid. I describe my method as a game of connect the dots. In the beginning, before I actually write anything, I sort out in my mind that I want to start at point A and end at point Z, and that in between those two points I need to have points B, C, D and so on (where each point is either an essential plot event or a crucial bit of character development/interaction). I prefer to err on the side of having fewer of these points—I just limit them to those story beats I absolutely must have, no compromises. Then, when I start writing, the pantsing begins: I jump right into it, but now I only have to bushwhack my way from A to B, and then from B to C, rather than trying to make it all the way from A to Z with no preparation.

Isabelle:  Outlining! In fact, I cannot do it, which is a large part of how I arrived at the method in the previous question. If I made myself complete a detailed outline before I started writing a book, I’d still be working on that outline at this very moment.

Isabelle:  No doubt every story I’ve read or seen has influenced me in some way. History. Philosophy, political or not. Feelings I’ve wanted to capture or communicate. Seeing tropes I dislike repeated over and over again and wanting to prove there’s a different way to go. Moral conundrums I struggle with.

TQ:  Describe The Empire's Ghost in 140 characters or less.

Isabelle:  What is the world going to be like, and who gets to decide?

TQ:  Tell us something about The Empire's Ghost that is not found in the book description.

Isabelle:  When he read the official description, my dad was very disappointed that it contained absolutely no mention of his favorite character, Seren Almasy. In an attempt to partially make up for that, I will tell you that Seren Almasy hates lying, objects to the term assassin, and is always carrying at least one more knife than you think she is.

TQ:  What inspired you to write The Empire's Ghost? What appeals to you about writing Epic Fantasy?

Isabelle:  Since I was very young, I’ve enjoyed making up worlds for my stories, with their own rules and histories. Epic fantasy lets you zoom in and out by turns: you can create a whole world, dream up all the ways its culture and politics shape the people who live there, and then you can turn it around and write about how this one individual will change the shape of the world.

TQ:  What sort of research did you do for The Empire's Ghost?

Isabelle:  Because I didn’t want the world of the novel to emulate any specific historical period exactly, my research was less was use of x thing widespread in y time period? and more is widespread use of x thing possible, given y environmental and technological constraints? This research ranged from essential details (I studied a wide variety of swords in order to decide which ones were in use in my world, how common/rare they were, etc.) to more trivial ones (a careful reader will note that my royals use drinking glasses made out of actual glass, a detail chosen after my research on the subject). For an early scene in the novel’s sequel, I had to delve into the history of towels.

TQ:  Please tell us about the cover for The Empire's Ghost.

Isabelle:  Gorgeous, isn’t it? It was designed by Young Jin Lim, and I’m afraid I contributed very little in the way of assistance—some suggestions about the coloring, and that’s about it. Since I’m wary of spoilers, I’ll just say that the character it depicts is a key to one of the central mysteries of the series.

TQ:  In The Empire's Ghost who was the easiest character to write and why? The hardest and why?

Isabelle:  Seth was the easiest, by a long shot. I understood his voice immediately, and slipping into it was like a hand into a glove, every time. The hardest was probably Seren, whose depth and intensity of feeling are at odds with her ability to express or even admit to those feelings. I got stuck in the middle of many a scene, wondering, “How do I convey this more clearly while staying true to what the inside of this character’s head is like?”

TQ:  Which question about The Empire's Ghost do you wish someone would ask? Ask it and answer it!

Isabelle:  “Since you have so many point of view characters, have you included any unreliable narrators?”

In any given scene, you can always trust that I’m presenting you with the POV character’s thoughts, feelings, and perceptions as they consciously understand them. So if you ever get an untruth in that area, it’ll be because the character is lying to themselves or refusing to accept something. Beyond that, a character’s deductions and opinions may be more or less reliable depending on the information available to them and their own particular biases. Gravis, for example, is a character with some very strong biases, and as a result his perspective is much less reliable on some subjects than on others. It’s been really fun for me to see which characters readers seem to trust most, especially in situations where two or more characters see the same person or issue very differently. I’d certainly never want you to assume that any character’s conclusions are always correct, no matter how perceptive they may seem to be.


TQ:  Give us one or two of your favorite non-spoilery quotes from The Empire's Ghost.

Isabelle:  Another fun thing about using multiple POV characters is the chance to play around with a variety of voices and tones. I wanted to remind readers whenever possible that no part of the novel is truly “neutral”—everything you read is filtered through a specific and deliberate perspective. To demonstrate, here are the first paragraphs of the first scenes of two very different POV characters:

The snow was falling thick throughout Araveil, and for just a moment Shinsei let himself imagine that it was snowing everywhere, that the world was fully blanketed in white, stifled into perfect stillness. It would be beautiful, he thought—quiet and peaceful, untouched by grossness and irregularity. He would walk through the streets, and the falling snowflakes would erase his footsteps behind him, like a slow, bittersweet forgetting. That was what memory should always be like.

Roger talked a good game about adventure, once he was tucked into a barstool, a tankard of ale in front of him. But Roger wasn’t here now, to see how the pristine wilds of his tales were choked with blood-colored nettles and infuriatingly vibrant weeds, how pathless forests were more of an annoyance than a wonder when you actually had somewhere to go. Deinol stumbled onto a rosebush—no flowers, all thorns, naturally—and swore, longing for nothing so much as a return to the grimy back alleys he knew so well.

Isabelle:  Thank you for having me. These were good questions. 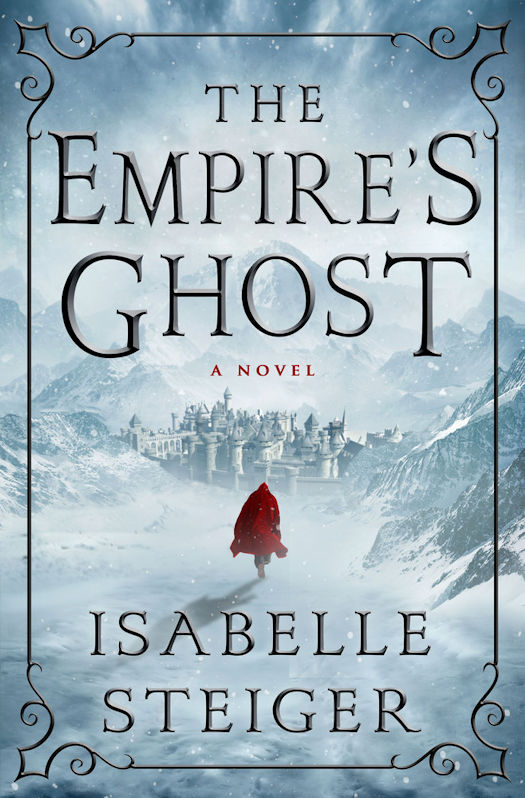 Isabelle Steiger has crafted a powerful and masterful debut with The Empire's Ghost, the first book in a haunting new epic fantasy series.

The empire of Elesthene once spanned a continent, but its rise heralded the death of magic. It tore itself apart from within, leaving behind a patchwork of kingdoms struggling to rebuild. But when a new dictator, the ambitious and enigmatic Imperator Elgar, seizes power in the old capital and seeks to recreate the lost empire anew, the other kingdoms have little hope of stopping him. Prince Kelken of Reglay finds himself at odds with his father at his country’s darkest hour; the marquise of Esthrades is unmatched in politics and strategy, but she sits at a staggering military disadvantage. And Issamira, the most powerful of the free countries, has shut itself off from the conflict, thrown into confusion by the disappearance of its crown prince and the ensuing struggle for succession.

Everything seems aligned in Elgar’s favor, but when he presses a band of insignificant but skilled alley-dwellers into his service for a mission of greatest secrecy, they find an unexpected opportunity to alter the balance of power in the war. Through their actions and those of the remaining royals, they may uncover not just a way to defeat Elgar, but also a deeper truth about their world’s lost history.

ISABELLE STEIGER was born in the city and grew up in the woods. She received her first notebook when she was eight, and she’s been filling them up ever since. She lives in New York, though her erstwhile companion, a very moody gray cat, has since retired and moved to Florida. The Empire’s Ghost is her first novel.