Please welcome Dianne Duvall to The Qwillery as part of the Phantom Shadows Official Blog Tour!

A Little Light With the Dark

“Dying is easy. Comedy is hard.” This famous quote has been credited to a number of different actors, including Peter O’Toole. I can’t remember what famous actor I personally heard say the words, but they’ve stuck with me over the years. The actor was discussing the difference between playing dramatic roles and comedic roles. Comedy, he explained, was harder because everyone has a different sense of humor. What makes one person guffaw may not even draw a chuckle from another, so it’s difficult to create something that will make a majority of viewers laugh.

I believe the same holds true for writing. I’ve read things in the past that I knew were supposed to be funny, but felt no temptation to laugh myself and read other things that cracked me up, yet suspected some readers may not find it amusing in the least. Laughter has always been a part of my life. I was raised in a family that teased each other mercilessly. My husband and I are always making each other laugh. So, some of that humor unconsciously crept into my Immortal Guardians paranormal romance novels.

I wasn’t sure how that would be received and, with each release, have waited patiently for readers’ responses. Much to my surprise and pleasure, one of the comments readers have made is that they are enjoying the humor in the series. Some even mentioned drawing odd looks when they laughed out loud while reading one of the Immortal Guardians books in public. I love making people laugh, so it is such a thrill to know my immortals are sparking some chuckles and giggles.

While my latest release PHANTOM SHADOWS, like the previous books in my series, has its fair share of dark moments, it, too, has a little humor. The Immortal Guardians are like one big family and treat each other like brothers and sisters. Their Seconds and other members of the human network that aids them are considered family as well. And, like many families, they often tease and razz each other . . . whenever they aren’t hunting psychotic vampires.

I hope you’ll join in their fun!

Oh, and I just found out that PHANTOM SHADOWS made the USA Today Bestseller List! I was so happy I had to share the news! :-) 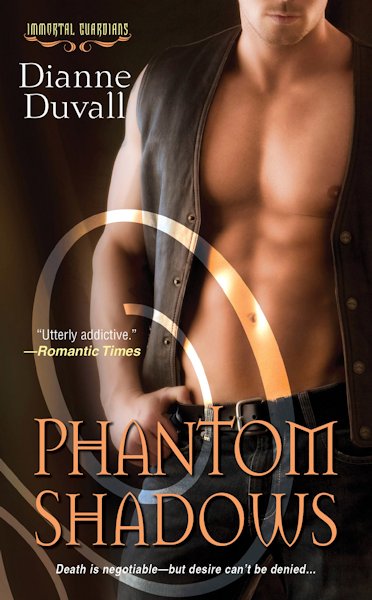 Dr. Melanie Lipton is no stranger to the supernatural. She knows immortals better than they know themselves, right down to their stubborn little genes. So although a handsome rogue immortal seems suspicious to her colleagues, Sebastien Newcombe intrigues Melanie. His history is checkered, his scars are impressive, and his ideas are daring. But it's not his ideas that have Melanie fighting off surges of desire. . .

Bastien is used to being the bad guy. In fact, he can't remember the last time he had an ally he could trust. But Melanie is different – and under her calm, professional exterior he senses a passion beyond anything in his centuries of experience. Giving in to temptation is out of the question – he can't put her in danger. But she isn't asking him . . . 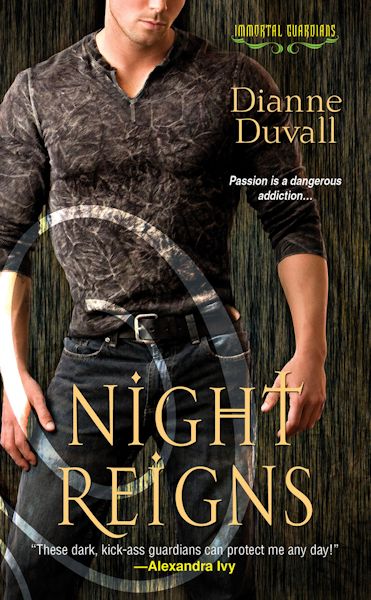 Dianne Duvall portrays a world of temptation, loyalty, and heartbreak…a world where danger and desire walk hand in hand…

Ami isn’t much for trusting strangers. She has a hard time trusting anyone. But she’s no coward, and she’s no pushover in the protection department either. So when she comes across a mysterious warrior taking on eight deranged vampires on his own, she doesn’t hesitate to save his bacon. Of course, that was before she realized what one little rescue would get her into…

Marcus Grayden has been an Immortal protector of humanity for eight hundred years, and he’s not interested in backup. From the moment Ami arrives in his life, he can’t deny that she’s strong, smart, and extremely skilled at watching his back. But she’s also destroying his protective solitude and stirring desires he can’t bear to awaken. After all, whatever her secrets—how can she defeat death itself? 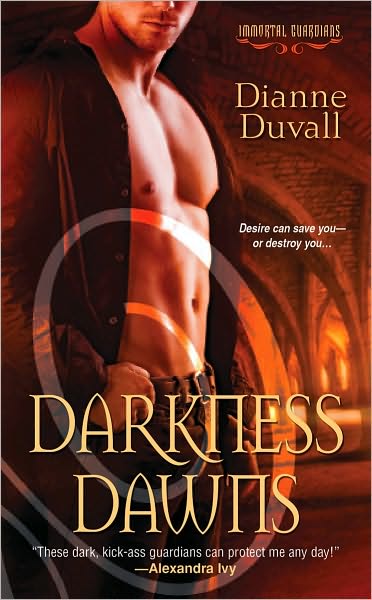 In this dazzling, sensual novel, Dianne Duvall beckons readers into a world of vampires, immortals, and humans with extraordinary gifts…where passion can last forever, if you’re willing to pay the price…

Once, Sarah Bingham’s biggest challenge was making her students pay attention in class. Now, after rescuing a wounded stranger, she’s landed in the middle of a battle between corrupt vampires and powerful immortals who also need blood to survive. Roland Warbrook is the most compelling man Sarah has ever laid hands on. But his desire for her is mingled with a hunger he can barely control…

In his nine centuries of immortal existence, no woman has tempted Roland as much as Sarah. But asking her to love him is impossible—when it means forfeiting the world she’s always known, and the life he would do anything to protect… 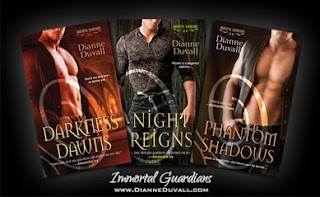 Dianne Duvall is the USA Today Bestselling Author of the Immortal Guardians paranormal romance series. Her debut novel DARKNESS DAWNS was nominated for the RT Reviewers' Choice Award for Best Vampire Romance by RT Book Reviews and for Best Paranormal Romance - Vampire by The Romance Reviews. NIGHT REIGNS, the second book, was declared an "utterly addictive" Top Pick by RT Book Reviews. And PHANTOM SHADOWS, the third book in the series, was deemed a Top Pick by The Romance Reviews. In addition to being a writer and an avid reader, Dianne loves all things creative. When she isn't burying her nose in a book or weaving stories of her own, Dianne is active in the independent film industry and once even appeared onscreen as a machete-wielding maniac not unlike the vampires she so loves to create in her novels.

Thank you so much for joining me here at The Qwillery. To celebrate the release of PHANTOM SHADOWS, I’m giving away a signed copy of the winner’s choice of one of the first three Immortal Guardians books + swag.

THE RULES FOR THE QWILLERY GIVEAWAY

What:  One commenter will win a signed copy of the winner’s choice of one of the first three Immortal Guardians books + swag From Dianne.


Do you enjoy a little humor in a Paranormal Romance novel?

Who and When:  The contest is open to all humans on the planet earth with a mailing address. Contest ends at 11:59pm US Eastern Time on Tuesday, October 23, 2012. Void where prohibited by law. No purchase necessary. You must be 18 years old or older to enter.

And don’t miss my big kindle contest! In addition to the giveaway here at The Qwillery, I am giving away THREE Kindles (or Kindle Gift Cards if you already have one) to celebrate the release of PHANTOM SHADOWS. See my website for details (or just click on the image below). 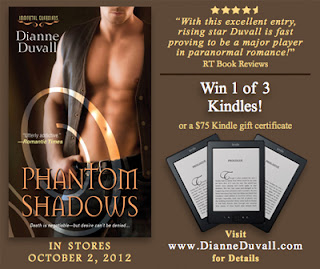 ** The Qwillery is not affiliated with Dianne's Kindle giveaway and is providing this for informational purposes only. Please follow Dianne's rules to enter to win 1 of 3 Kindles.
Posted by Qwill at 8:19 AM