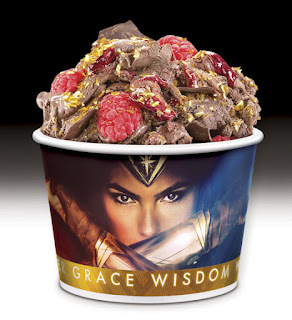 The promotional flavor will be featured in the Wonder Woman Berry Bold Creation™, which combines the Dark Chocolate Triple Berry Ice Cream with Chocolate Shavings, Raspberries and edible Gold Glitter. The Gotta Have It® size of the new flavor and Creation will be served in a special co-branded cup, featuring an image of Wonder Woman from the film.

"We are excited to continue our partnership with Warner Bros. for this empowering and adventurous new movie," said Kate Unger, senior vice president of marketing for Cold Stone Creamery. "Customers are going to love our super-premium ice cream and enjoy our new Wonder Woman-inspired Creation. The bold flavor of our Dark Chocolate Triple Berry Ice Cream gives it a powerful chocolaty taste that goes perfectly with Raspberries and Chocolate Shavings. Then we add Gold Glitter to give it some glam!"

About Cold Stone Creamery
Cold Stone Creamery® delivers the Ultimate Ice Cream Experience® through a community of franchisees who are passionate about ice cream. The secret recipe for smooth and creamy ice cream is handcrafted fresh daily in each store, and then customized by combining a variety of mix-ins on a frozen granite stone. Headquartered in Scottsdale, Arizona, Cold Stone Creamery is owned by parent company Kahala Brands™, one of the fastest growing franchising companies in the world, with a portfolio of 22 quick-service restaurant concepts. The Cold Stone Creamery brand operates approximately 1,500 locations in over 28 countries.

About "Made Fresh"
In Cold Stone Creamery® locations across the world, our ice cream is handcrafted in small batches – one flavor at a time. We start with the highest quality cream, sugar and flavorings to make our ice cream fresh in the back of each of our stores. This small-batch process ensures our customers receive the richest, creamiest, most delicious ice cream when they visit Cold Stone Creamery.

For more information about Kahala Brands, visit www.KahalaBrands.com.
Posted by Qwill at 7:03 AM