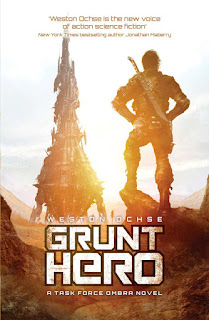 Weston:  I’m a hybrid. I plot enough,t hen I pants it. I love it when a character surprises me. When they do, I know I have something special. I’m not sure that if I was a pure plotter if that would happen.

Weston:  Humanity fought the war and lost. Aliens now have the run of our Earth. When all hope is gone, all that’s left is to seek revenge.

TQ:  Grunt Hero is the conclusion to your Task Force Ombra series. What are your feelings on wrapping up the series?

Weston:  I’d call this a trilogy, not a series. When I wrote the SEAL Team 666 books, I thought I was writing a trilogy, but it ended up being a series. What’s the difference? A trilogy is an enclosed literary environment where something special happens. A series is books that follow one after the other that don’t necessarily have a relation to the others except for characters and setting. Like the James Bond books. That was a series. I took what I learned about failing to write a trilogy with the SEAL Team 666 books and impressed them into the writing of the Grunt Trilogy. What are my feelings, you ask? I’m happy that I actually created a solid trilogy. I am sort of saddened to let Ben Mason go, though. He was a hell of a grunt.

TQ:  Tell us something about Grunt Hero that is not found in the book description.

Weston:  It has walruses.

TQ:  What inspired you to write the Task Force Ombra series? What appeals to you about writing Military SF?

Weston:  I’ve spent 35 years in the military. They say write what you know. I’ve written thirty books and six out of the last seven books I wrote were military fiction. It’s appealing to my sensibilities right now to write military sf. I think there’s some really terrific writing out there, but not a lot by people who have been street level with a terrorist. There are feelings one has when they are in harm’s way that no amount of research can get you. In fact, I wrote Grunt Life while I was in Afghanistan and brought into it some of the feelings of mortality I was having then.

TQ:  What sort of research did you do for Grunt Hero and the series?

TQ:  In the Task Force Ombra series who was the easiest character to write and why? Which character surprised you?

Weston:  Ben Mason was the easiest to write for me, because he was essentially me. I included many biographical elements into that character. Michelle became the hardest to write, mainly because of what I did to her.

Weston:  I wrote and turned in Burning Sky for Solaris, which is a military horror novel set in Afghanistan. I’m working on the sequel to that, Dead Sky and I’m also working on a few other books. I had a big short story year this last year. I worked on the franchises of Hellboy, X-Files, Joe Ledger, Aliens and Predator. The Hellboy and Predator stories have yet to be published. This fall I’m working with DC Comics on a project. I’m super stoked about that. 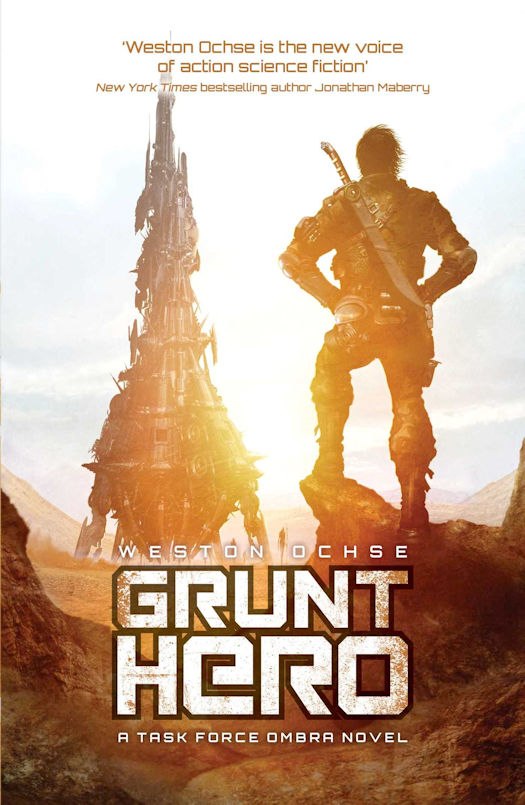 It is a time for heroes, for killers, for Grunts.

In this thrilling conclusion to the breakout military SF series, we find Earth plagued with millions of miles of terraformed cities, black vines crushing concrete, revealing iron and steel. Those unable to escape the vines are empty vessels waiting to be filled, living storage for alien algorythmic thought. What else can happen? What more can be done? This has always been a time for for heroes, for Killers, for Grunts, but are they enough?

Benjamin Carter Mason will be asked to return to OMBRA to help them find these answers, and what he finds will send him over the edge. In the end, his efforts won't be about survival, they'll be about revenge, and his revenge will be served in a blaze. 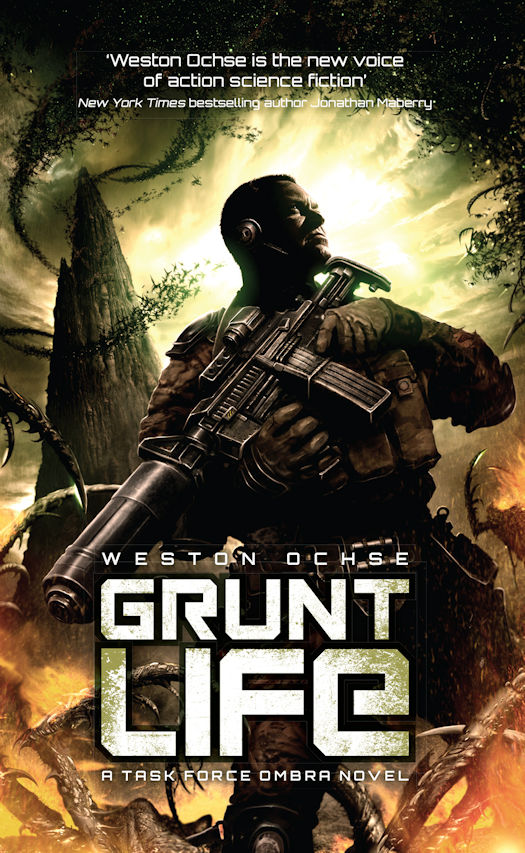 This is a brand new Military SF series from Weston Ochse, an experienced military man and author.

Benjamin Carter Mason died last night. Maybe he threw himself off a bridge into Los Angeles Harbor, or maybe he burned to death in a house fire in San Pedro; it doesn’t really matter. Today, Mason’s starting a new life. He’s back in boot camp, training for the only war left that matters a damn.

For years, their spies have been coming to Earth, mapping our cities, learning our weaknesses, leaving tragedy in their wake. Our governments knew, but they did nothing—the prospect was too awful, the costs too high—and now, the horrifying and utterly alien Cray are invading, laying waste to our cities. The human race is a heartbeat away from extinction.

That is, unless Mason, and the other men and women of Task Force OMBRA, can do anything about it.

This is a time for heroes. For killers. For Grunts 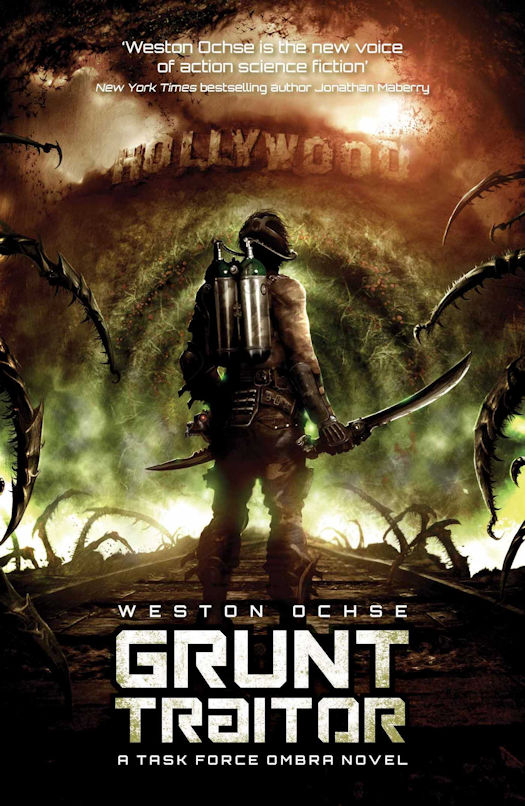 Their spies were among us for years. They mapped our electrical infrastructure, learned our weaknesses, until finally they flipped the switch and threw us back into the Dark Ages.

Only OMBRA and its battalions around the world seem capable of defending Earth from the next wave of attack—terraforming. But at what price can we gain our freedom from these yet to be identified aliens? They're pushing the human race to the edge of extinction if we can't find a way to change things. But what will we have to change? What will we humans become to survive this threat. This is a time for heroes. For killers. For Grunts.

Benjamin Carter Mason will be asked this question over and over as he dives deep into the nasty heart of an alien transformed Los Angeles. And in the end, he might be the last person on Earth defending not just our lives, but our humanity. 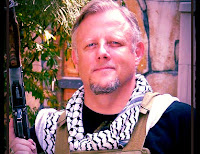 Weston Ochse is a former intelligence officer and special operations soldier who has engaged enemy combatants, terrorists, border crossers, narco-bad guys, and human smuggling punks. His personal war stories include performing humanitarian operations over Bangladesh, being deployed to Afghanistan, and a near miss being cannibalized in Papua New Guinea. A writer of more than 26 books in multiple genres, his military supernatural series SEAL Team 666 has been optioned to be a movie starring Dwayne Johnson. His military sci fi series, which starts with Grunt Life, has been praised for its PTSD-positive depiction of soldiers at peace and at war.