Guest Blog by Michael Johnston - My Inspiration for Soleri - and Giveaway


Please welcome Michael Johnston to The Qwillery as part of the of the 2017 Debut Author Challenge Guest Blogs. Soleri, Michael's solo debut, will published on June 13th by Tor Books. 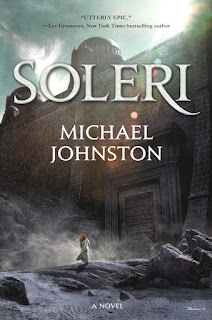 My Inspiration for Soleri
by Michael Johnston
“May you share the sun’s fate.”

I saw the words on a pyramidion, which is a little gold pyramid that sits atop an actual much, much larger pyramid. You know, like the big ones in the deserts of Egypt. I was at the British Museum in London when I saw the little pyramidion and the words weren’t written in English, but in hieroglyphs. I had to read the plaque below it to understand.

I was an architect at the time, so I was interested in these things; I always read the captions. As a writer I’m still interested in this stuff, but it’s the words that grab my attention more than the objects. I love the intersection of myth and architecture, so this particular phrase stuck in my head. Years later, when I began writing an epic fantasy novel that took place in a society that was a lot like ancient Egypt, the phrase came back to me. In my novel, Soleri, “May you share the sun’s fate” is a kind of farewell. It’s a means of saying goodbye, adios. But it’s also a theme in Soleri. It resonates on one or two levels, perhaps more.

Maybe it just says, hey, I hope you live through the day, that you wake up in the morning and rise from bed. In ancient times, living through the day meant a lot more than it does now. People didn’t live as long back then and their day-to-day lives were a lot tougher than ours. The characters in Soleri happened to lead particularly dangerous lives, so the phrase carries a bit more weight for the characters. Death follows them and it catches up to a few...which takes us to the phrase’s second meaning.

There’s a reason why the ancient Egyptians placed that passage atop some of their pyramids. It was a prayer. They were asking to rise again, but not in this world. They imagined a vast afterlife and spent a great deal of time and effort preparing for their place within it. I play with this second meaning in Soleri. Some of my characters spend their days just trying to survive. And they’re happy enough to see the sun rise each day. But a few of them might just welcome death, and they might not want to rise again from it.

When I set out to write the novel, I wanted to take my old career as an architect and fuse it with my new one as a writer. It didn’t always work out. The first draft had page after page of unnecessary and overly detailed descriptions of buildings. At times I had to separate the two professions. Not everyone cares how the Egyptians built in stone, or what tools they had available at what time. But there were places in the writing where my former career and my new one intersected beautifully. One informed the other. “May you share the sun’s fate” was just one of them, but it was probably my favorite. After all, who wouldn’t want to rise from their own grave? 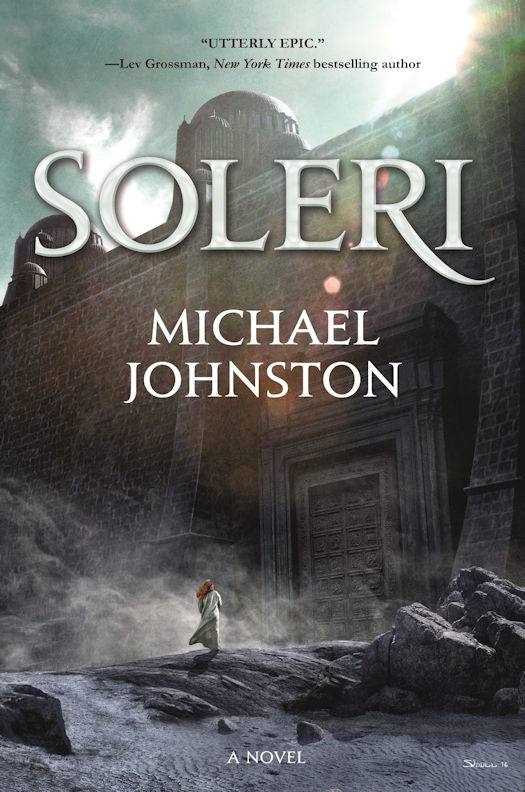 Michael Johnston brings you the first in a new epic fantasy series inspired by ancient Egyptian history and King Lear.

The ruling family of the Soleri Empire has been in power longer than even the calendars that stretch back 2,826 years. Those records tell a history of conquest and domination by a people descended from gods, older than anything in the known world. No living person has seen them for centuries, yet their grip on their four subjugate kingdoms remains tighter than ever.

On the day of the annual eclipse, the Harkan king, Arko-Hark Wadi, sets off on a hunt and shirks his duty rather than bow to the emperor. Ren, his son and heir, is a prisoner in the capital, while his daughters struggle against their own chains. Merit, the eldest, has found a way to stand against imperial law and marry the man she desires, but needs her sister’s help, and Kepi has her own ideas.

Meanwhile, Sarra Amunet, Mother Priestess of the sun god’s cult, holds the keys to the end of an empire and a past betrayal that could shatter her family.

Detailed and historical, vast in scope and intricate in conception, Soleri bristles with primal magic and unexpected violence. It is a world of ancient and elaborate rites, of unseen power and kingdoms ravaged by war, where victory comes with a price, and every truth conceals a deeper secret.

Michael Johnson was born in Cleveland, Ohio and is a life-long avid reader of science fiction and fantasy. He studied architecture and ancient history at Lehigh University and earned a master’s degree in architecture from Columbia University. After working as an architect in New York City, he switched to writing full-time. He lives in Los Angeles, with his wife Melissa de la Cruz and daughter. Visit http://michaeljohnstonauthor.com/ or follow him on Twitter: @mjohnstonauthor

What:  3 Advance Readers Copies (ARCs) - 3 Winners - of Soleri by Michael Johnston. US Only

How:
Who:  The giveaway is open to all humans on the planet earth with a US mailing address.