EXTREMITY #3 Rushed Back to Print

EXTREMITY #3 RUSHED BACK TO PRINT
PORTLAND, OR, 05/11/2017 — Image Comics/Skybound Entertainment is pleased to announce that the third issue of the breakout hit EXTREMITY, from Space Mullet creator Daniel Warren Johnson, is being rushed back to print in order to keep up with customer demand. All three issues of this wildly successful dystopian series have now earned multiple printings.

Not so long ago, Thea was an artist. She had a family. Now she is consumed by vengeance. However, Brynjar is a hunter by nature, and hunters are not easy prey.


Select praise for EXTREMITY:
“Don't miss out on this tour-de-force of comics artistry.” —Newsarama
“After three issues of EXTREMITY, one thing is crystal clear: creator Daniel Warren
Johnson and the rest of his team absolutely excel at crafting epic battle scenes that
explode across the page, practically grabbing you by the throat and refusing to let go.”
—Multiversity Comics
“EXTREMITY is a work of art.” —SlackJaw Punks 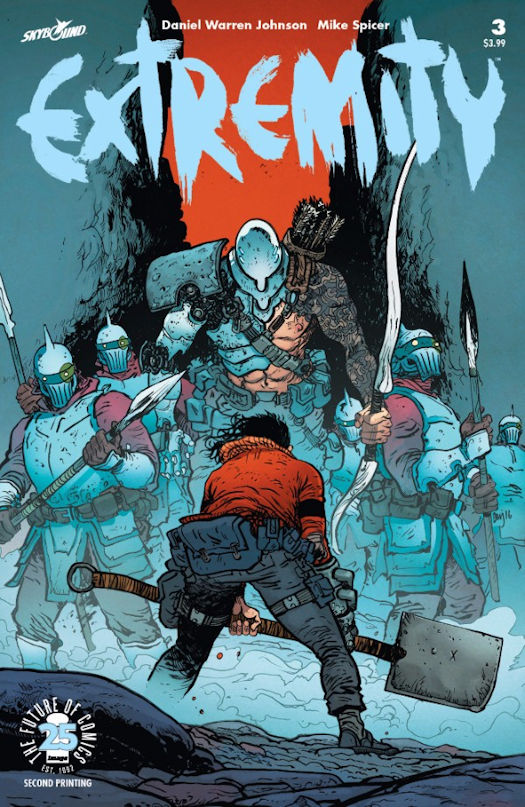 ABOUT IMAGE COMICS
Image Comics is a comic book and graphic novel publisher founded in 1992 by a collective of bestselling artists. Image has since gone on to become one of the largest comics publishers in the United States. Image currently has five partners: Robert Kirkman, Erik Larsen, Todd McFarlane, Marc Silvestri and Jim Valentino. It consists of five major houses: Todd McFarlane Productions, Top Cow Productions, Shadowline Comics, Skybound Entertainment, and Image Central. Image publishes comics and graphic novels in nearly every genre, sub-genre, and style imaginable. It offers science fiction, fantasy, romance, horror, crime fiction, historical fiction, humor and more by the finest artists and writers working in the medium today. For more information, visit www.imagecomics.com.
ABOUT SKYBOUND ENTERTAINMENT
Founded in 2010, Skybound Entertainment is a multiplatform entertainment company specializing in television, comics, film, digital content, interactive, gaming, and merchandise. The company is led by The Walking Dead creator Robert Kirkman and his longtime producing and business partner David Alpert.
Posted by Qwill at 7:51 AM