Please welcome Bailey Cattrell to The Qwillery. Nightshade for Warning was published on May 2nd by Berkley.


Bailey believes magic is all around us if we only look for it. After earning degrees in philosophy and English, she held a variety of positions ranging from driver’s license examiner to soap maker. She traveled the world as a localization program manager, but now sticks close to home, where she writes, cooks, and tends to a dozen garden beds. Bailey resides in Colorado with her guy and two felines: Cheesecat the Orange and Minerva the asthmatic wonder kitty. (from Penguin Random House) 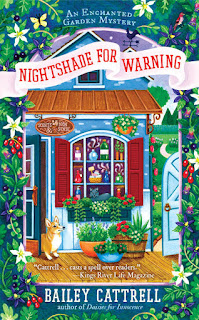 Nightshade for Warning is the second in the Enchanted Garden Mystery series featuring aromatherapist and perfumer Elliana Allbright. After divorcing her philandering husband, she opened her dream business, Scents & Nonsense, in her hometown of Poppyville, California. Her almost supernatural sense of smell combined with her ability to intuitively know what fragrances will help her friends and customers overcome difficulty or simply bring them pleasure has made her business take off like a rocket.

The Enchanted Garden behind her shop is chock-full of rambling plants, bird houses and windchimes, winding paths, tumbling terrace beds, and myriad herbs and flowers from which she distills the concentrated scents that are the hallmark of her unique perfumes. For this, she uses the ancient copper alembic her gamma left her along with an illustrated garden journal Ellie has come to realize contains more than a little magic.

The garden is open to her customers and friends to sit, sip tea, and nibble on the cookies that her best friend, Astrid Moneypenny, bakes up every morning. Miniature garden tableaus, gnome doors and fairy gardens are tucked into crevices and nooks all over the space. Dash the corgi and Nabokov the Russian Blue shop cat provide Ellie company and keep an eye on things, while Ellie herself lives in a super-efficient tiny house at the back of the property.

In Nightshade for Warning, Ellie is missing Ritter Nelson, her new beau who is on a research project in the Alaskan tundra. He’s only been gone for a few weeks, but there are months to go. It’s a welcome distraction when journalist Blake Sontag wants to feature her tiny house in a national magazine. She’s proud of her small-scale home, and Ellie’s business group, the Greenstockings, see it as a terrific opportunity to spread the word about their adorable tourist town with its Old West flavor and access to outdoor activities.

Then her little brother, Colby, turns up with his Westfalia van and a new girlfriend, Larken. Ellie adores her brother, and takes to Larken – a wildcrafter and herbalist after her own heart – right away.
Things are looking up until Sontag is poisoned, and the police focus on the last person to see him alive – Colby’s girlfriend, Larken. It doesn’t help that she had extensive herbal knowledge and the poison that killed the journalist was plant-based.

Detective Max Lang has held even more of a grudge against Ellie ever since she proved herself innocent of the murder he tried to pin on her months before, so it’s not easy when Ellie agrees to help Larken. But she plunges in with the help of Astrid and the other members of the Greenstockings to uncover the murder victim’s past in Poppyville, a mysterious land grant, an old family secret – and plenty of motives for murder. In the process, she learns a bit more about her magical abilities, and a new admirer challenges her determination to stay true to Ritter despite his long absence and sometimes confusing communications.

The book includes recipes for Astrid’s Lavender Shortbread Cookies and the Peppermint Foot Polish that Maria Canto loves so much.

Next up? Potions and Pastries, the seventh in the Magical Bakery Mystery series that I write as Bailey Cates, will release in November, 2017, and I’m currently working on the third Enchanted Garden Mystery, tentatively titled Marigolds for Malice.

For more information about all my books (and pen names), please visit www.baileycates.com. 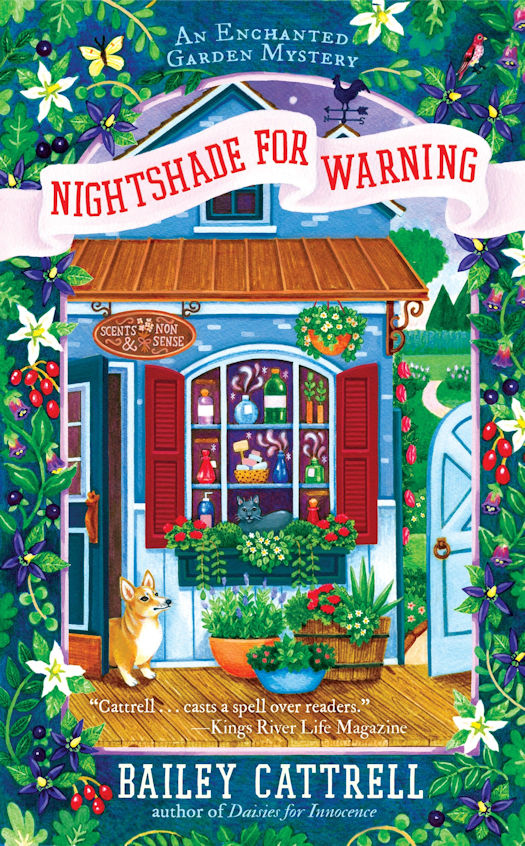 Elliana Allbright’s custom-made perfume shop and the Enchanted Garden behind it are garnering all sorts of attention, but a dead body could bury her in bad publicity. . . .

Ellie’s business and personal life have been flourishing in her hometown of Poppyville, California, since she opened Scents & Nonsense. She uses her very special skills to craft perfumes that almost magically ease heartache, inspire change, and bring joy—and her customers love to relax in the beautiful garden behind her shop with her corgi, Dash, and her cat, Nabokov. She even lives right next to the garden, in a compact “tiny house”—and she’s excited to hear that a journalist is going to write a feature about her home and garden for a national magazine.

But then the journalist is found dead, and suspicion falls on the last person to see him—who just happens to be Ellie’s brother’s girlfriend. So before everything goes to seed, Ellie must rely on her powers—observational and otherwise—to pick out the real killer from an ever-expanding bouquet of culprits. . . .

Nightshade for Warning is the second installment in Bailey Cattrell's whimsical Enchanted Garden Mystery series. Elliana Allbright, proprietor of Scents and Nonsense in picturesque Poppyville, California, has recently discovered that her affinity with plants and aromas is more magical than mundane. While trying to carry on a long distance relationship with old friend Ritter, Elliana is getting ready for her tiny home, once a garden shed, to be featured in an article for a national environmental magazine. Little does Ellie know that the interviewer is about to become Poppyville's newest murder victim, and that she will feel compelled to solve the mystery when her half-brother's new girlfriend stands accused of the crime.

Elliana is petite and sweet.. She possesses a curious nature and is exploring what it means to have magical tendencies. She lives quietly and happily in the garden of her beloved gift and aromatherapy shop with her darling Corgi, Dash, and the regal shop cat she acquired with the shopfront, Nabokov. Ellie's best friend, Astrid Moneypenny, a pet whisperer, also helps out in her shop, providing delicious baked treats for Ellie's customers. Maggie Clement is Ellie's part time shop assistant, dividing her time between Scents and Nonsense and the Roux Grill, the eatery now run by Ellie's smarmy ex-husband Harris. Harris turns up in this story like a bad penny, but is only on the sidelines for most of the book.

A character that was only touched on in the previous book in this series is Colby, Elliana's half brother. He has been wandering the country for some time, but has suddenly returned to Poppyville with a stunning new girlfriend in tow. Larken Meadows is as sweet as her name, but she's a staunch environmentalist who gets into a heated argument with the murder victim the evening of his death.

Blake Sontag has a very short cameo in the story before he is murdered. Blake is a Poppyville native who returns for the tiny house story and is a thoroughly unlikable character. His death is not much lamented, even by his former fiancée, local business powerhouse, founder of the women's business association, The Greenstockings, and confirmed man-eater, Cynthia Beck. There are also appearances from the other Greenstockings and various new and old townspeople, including detective Max Lang, Ellie's nemesis from the first novel. Newcomers of note include; Joyous Sontag, Blake's surly, reclusive sister, who hides a secret that proves to be integral to the story, Vaughn Newton, a mysterious giant of a man who also knows Ellie's ex-husband, Tanner Spence, a dreamy photographer who had reason to hate Blake, and Felicity Donovan, manager of the hotel where Blake was murdered, and another person who had a grudge against him.

The plot moves along well throughout the entirety of the novel, not too fast, but not too slow either. The author is able to use scent descriptions to breathe deeper life into scenes and characters that are unique and enhances the entire story line. There are a couple of twists and surprises in the novel that make it stand out from other magical cozy mysteries. This was a fun read and the Enchanted Garden Mysteries are destined to become one of my favorite book series and I am eagerly awaiting future installments.


~~~~
Note from Qwill: Our reviewer Jennifer is back after taking a break after her daughter's birth. While reading Daisies for Innocence (the first Enchanted Garden Mystery), Jennifer found the name for her daughter - Elliana! Welcome back Jennifer! 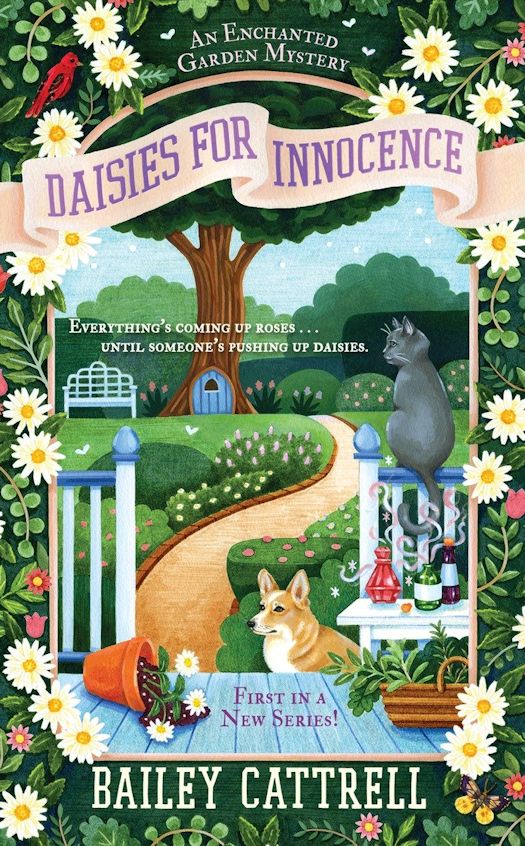 Ellie’s life has blossomed in Poppyville, California, since she opened Scents & Nonsense, a custom-made-perfume store. Her skills with aromas and botanical essences—some from her very own garden—seem almost…supernatural. Her perfumes can evoke emotions, bring about change, or simply make people happy. Customers are flocking to the store to buy her wares or just to sit in her beautiful garden, sip tea and enjoy homemade cookies.

What:  One entrant will win a Mass Market Paperback copy of Nightshade for Warning by Bailey Cattrell from the publisher. US ONLY

How:
Who and When:  The contest is open to all humans on the planet earth with a US mailing address. Contest ends at 11:59PM US Eastern Time on May 31, 2017. Void where prohibited by law. No purchase necessary. You must be 18 years old or older to enter