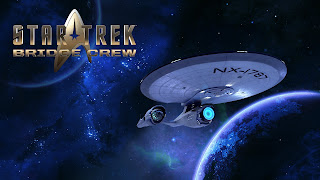 
Star Trek: Bridge Crew immerses fans into the Star Trek universe as they assume the role of a Starfleet officer and complete missions that will determine the fate of their ship and crew. Playable cooperatively online with a crew, or solo as Captain, Star Trek: Bridge Crew puts players and their friends directly onto the bridge of a new starship, the U.S.S. Aegis, as they are dispatched to explore an uncharted sector of space.

In addition to an engaging story campaign, Star Trek: Bridge Crew features an Ongoing Voyages mode featuring randomized missions for countless hours of solo and co-op adventures on board the U.S.S. Aegis or the legendary U.S.S. Enterprise NCC-1701, authentically recreated from Star Trek: The Original Series.

Created exclusively for VR, Star Trek: Bridge Crew utilizes the powerful sense of social presence possible through virtual reality. Through hand tracking and full-body avatars, including real-time lip-sync, players can live out their Star Trek fantasies as they operate the Starfleet ship as Captain, Engineer, Helm or Tactical. Each role is crucial to the success of the varied missions players face, and only by working together can the crew complete their objectives.

Additionally, Star Trek: Bridge Crew will include IBM Watson interactive speech and cognitive capabilities during an experimental beta period this summer. With IBM Watson, players will be able to use their voice and natural-language commands to interact with their virtual Starfleet crew members.

Star Trek: Bridge Crew marks the most recent project in virtual reality for Ubisoft, which believes in the strong potential of VR to redefine social gaming with a unique sense of reality. Ubisoft recently released Werewolves Within™ and Eagle Flight®, and announced a VR partnership with the film company SpectreVision.

About IBM Watson: Pioneering a New Era of Computing

Watson represents a new era in computing called cognitive computing, where systems understand the world in a way more similar to humans: through senses, learning, and experience. Watson continuously learns from previous interactions, gaining in value and knowledge over time. With the help of Watson, organizations are harnessing the power of cognitive computing to transform industries, help professionals do their jobs better, and solve important challenges.

As part of IBM’s strategy to accelerate the growth of cognitive computing, Watson is open to the world, allowing a growing community of developers, students, entrepreneurs and tech enthusiasts to easily tap into the most advanced and diverse cognitive computing platform available today. Watson solutions are being built, used and deployed in more than 45 countries and across 20 different industries.

For more information on IBM Watson, visit: ibm.com/Watson and ibm.com/press/watson. Join the conversation at #ibmwatson.

Ubisoft is a leading creator, publisher and distributor of interactive entertainment and services, with a rich portfolio of world-renowned brands, including Assassin’s Creed, Just Dance, Tom Clancy’s video game series, Rayman, Far Cry and Watch Dogs. The teams throughout Ubisoft’s worldwide network of studios and business offices are committed to delivering original and memorable gaming experiences across all popular platforms, including consoles, mobile phones, tablets and PCs. For the 2016–17 fiscal year Ubisoft generated sales of €1,460 million. To learn more, please visit www.ubisoftgroup.com.