Please welcome Craig Comer to The Qwillery. The Laird of Duncairn was published on May 2nd by City Owl Press. 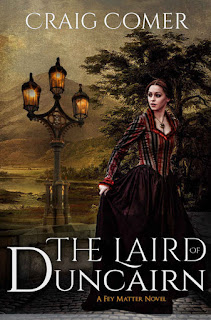 Craig:  Hello! In retrospect, I’ve always been writing. As a kid, I used to create stories and try to plot out longer works. I drew maps and dreamed up other worlds. At one point, I had a binder full of characters and story ideas. But I never tried to do anything professional until after college. I wrote a story. It got published online, and it clicked that I wanted to write and publish more. It was kind of a headshaking epiphany because I’d been creating stories for so long, I just hadn’t realized it.

Craig:  More of a plotter, but I’m definitely trying out different techniques. I think that’s important at the start—to try different approaches to writing in order to hone in on your author’s voice. My first novel is pantsed, and it’s sitting on a shelf collecting dust. Its structure doesn’t work at all. For The Laird of Duncairn, I focused on plotting what the big power players would do so that I could see how Effie’s actions impacted them. She’s a small fish in a big sea, so I needed to know everyone’s end-game first, then set her loose among them.

Craig:  A common one, I think—finding the time to do it. I sit at a computer for my day job, so wanting to spend more hours of the day fixed at a keyboard isn’t always appealing. But the stories keep coming, and I have to write them down somewhere!

Craig:  I love to travel. We did a ton of road trips as a kid, and I was always reading or staring out the window taking in everything. I travel with my wife now, and we love to cook up stories for the places we’re visiting. The people around us probably think we’re a bit looney, hearing our discussions—types of poisons, why a non-existent mill burned down, why someone’s lover needs to be a bit older. You know, common conversation topics while sitting in a café or hiking a trail.

TQ:  Describe The Laird of Duncairn in 140 characters or less.

Craig:  An orphaned fey rallies those who revile her against an auld enemy as the battle over the FEY MATTER ravages the Highlands.

TQ:  Tell us something about The Laird of Duncairn that is not found in the book description.

Craig:  Though the book is only loosely historical—the setting is very much my imagining of Victorian Scotland rather than to-the-button accurate—I do have a few historical figures making appearances. And I left them as Easter eggs rather than letting them call attention to themselves. I thought it more fun that way, and it doesn’t alter the story in any way if you don’t catch them.

TQ:  What inspired you to write The Laird of Duncairn? Why did you set the novel in Scotland?

Craig:  Like all my great ideas, it started with my wife. I’d written several fantasy short stories in imagined worlds, and she suggested I try writing in a place I knew well. I’d studied history in Scotland and lived there for a year, and fleshing out that setting came at a time when I’d thought of the Effie character. The two blended, and the tale started there. It was fun plopping her into the same pubs and castles I frequented while as a student, only set a hundred years earlier.

Craig:  To paraphrase Leanna Renee Hieber, author of the Eterna Files, gaslamp uses the same 19th century aesthetic as steampunk but uses fantasy elements in place of science fiction. It has ghosts, fairies, and magic systems rather than clockwork devices, gadgets, and mad scientists.

TQ:  What sort of research did you do for The Laird of Duncairn?

Craig:  Beyond brushing up on Scottish history, I really focused on researching a mythology that wasn’t just a retelling of the Irish fairy courts. Scottish mythology is a hybrid of the Celtic and the Norse, and I found the tales from the Orkney and Shetland islands fascinating and fresh. So I used those where I could and plan to use more in the future.

TQ:  In The Laird of Duncairn who was the easiest character to write and why? The hardest and why?

Craig:  Edmond Glover, because he’s a buffoon. Everyone else has a lot more substance; Glover is blindly driven by his own obsessions. I hope that doesn’t say too much about me. :) The hardest was Effie because of the need to balance her personal growth with her need to serve the story.

TQ:  Which question about The Laird of Duncairn do you wish someone would ask? Ask it and answer it!

Craig:  How many dresses does Effie ruin during the book? The answer is just 4, I think, but it might feel like more. Her curiosity gets her into a lot mischief, and those dresses weren’t exactly designed for crawling through caves or crashing through trees!

TQ:  Give us one or two of your favorite non-spoilery quotes from The Laird of Duncairn.

“The fey will do anything to protect their substance. Unfortunately, the queen has more men and more bullets.”

Effie smiled, but her tone held sorrow in it. “I spent my childhood hunted by the queen’s minions, casting about for a home and a family. To be called a romantic is to admit I am part of a dying race.”

Craig:  I’ve finished the rough draft of book II of the Fey Matter series and am about to start editing and revising it. I hope to have it out by the start of next year, and then a third book shortly after that. I’ve also started plotting out a contemporary mystery series set in a small town in the Pacific Northwest. I want it to have the feel of The Dresden Files meets Midsomer Murders.

Craig:  Thank you for hosting me! These were fun questions! 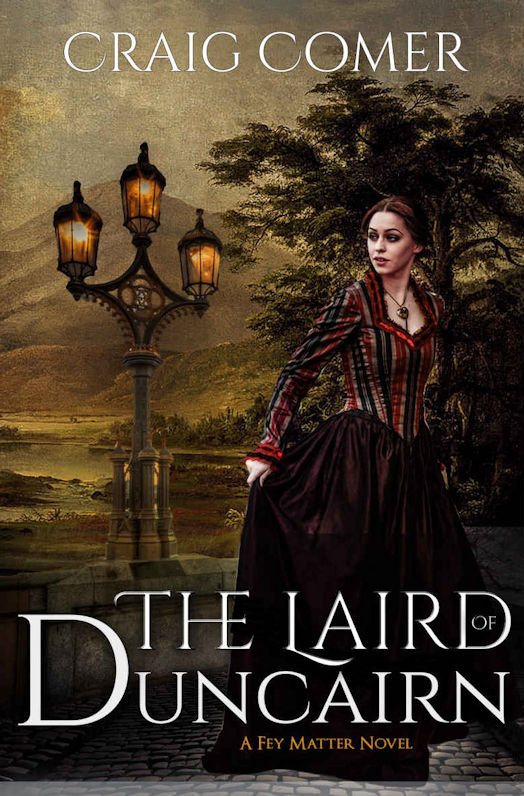 The year is 1882 Scotland, and the auld alliance betwixt king and fey has long been forgotten. Men of science, backed by barons of industry, push the boundaries of technology. When Sir Walter Conrad discovers a new energy source, one that could topple nations and revolutionize society, the race to dominate its ownership begins. But the excavation and use of this energy source will have dire consequences for both humans and fey. For an ancient enemy stirs, awakened by Sir Walter’s discovery.

Outcast half-fey Effie of Glen Coe is the Empire’s only hope at averting the oncoming disaster. Effie finds herself embroiled in the conflict, investigating the eldritch evil spreading throughout the Highlands. As she struggles against the greed of mighty lords and to escape the clutches of the queen’s minions, her comfortable world is shattered. Racing to thwart the growing menace, she realizes the only thing that can save them all is a truce no one wants. 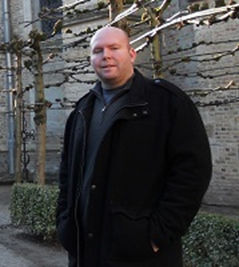 Craig Comer is the author of the gaslamp fantasy novel THE LAIRD OF DUNCAIRN and co-author of the mosaic fantasy novel THE ROADS TO BALDAIRN MOTTE. His shorter works have appeared in several anthologies, including BARDIC TALES AND SAGE ADVICE and PULP EMPIRE VOLUME IV. Craig earned a Master’s Degree in Writing from the University of Southern California. He enjoys tramping across countries in his spare time, preferably those strewn with pubs and castles.