colleen m was picked for Tempest Rising by Nicole Peeler


AYates was picked for Soulless by Gail Carriger.


We used a random number generator this time. It's more fun picking names out of a hat!


Please send your snail mail addresses to TheQwillery aht gmail daht com. (I'm guessing that you know how to fix this!)


Thanks to everyone for commenting. I'll be posting about some more books that I really liked and will be giving away soon.
Posted by Qwill at 6:11 PM 4 comments

Recently I had the pleasure of reading two books that I really enjoyed, thought were very well written, and would recommend without reservation. I'm so enamored with these 2 books that I will be giving away a copy of each: one commenter will be picked for Tempest Rising by Nicole Peeler and one commenter will be picked for Soulless by Gail Carriger.

You may ask, why did Qwill like these books so much? Okay, you might not ask but I'm going to tell you anyway. First, both books are unusual. Second, both books are beautifully written with the authors displaying a command of the English language that I find admirable. Third, the world building was very well done. Fourth, the main character in each book, both females, appealed to me. Fifth, the books satisfied me even though both left lingering questions. (Gail - what's up with the octopi? Nicole - I hope we get more of the back story for the dog.)

I'm not going to delve deeply into plot, characters, or machinations because I am not writing full reviews of the books and I do not want to spoil even a bit of the stories. 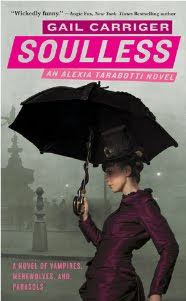 Soulless is the 1st book in the Parasol Protectorate series. Soulless is a steampunky comedy of manners with werewolves and vampires and more set in Victorian London. Oh my. The leading lady, Alexia Tarabotti, does not give in to the confines of Victorian England, which leads to some humouros and dangerous situations. Miss Tarabotti a preternatural - no soul. Her preternatural ability negates those of the supernatural. Let's just say that there is something mysterious afoot. Steep a cup of your favorite tea, get comfy, and enjoy a great read.

Changeless (The Parasol Protectorate 2) will be released in March 2010. 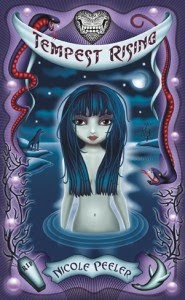 Tempest Rising is the first book in the Jane True Series. Jane is not your typical Urban Fantasy heroine. She's much more accessible in my opinion. She's also half-Selkie! Tempest Rising is set in Rockabill, Maine, where Jane has grown up under difficult circumstances the root of which are slowly revealed in the novel. There are quite a few unusual paranormal beings in this book plus several of the more common. I enjoyed reading about Jane and the denizens seen and unseen in Rockabill. This is a book that you can really dive into!

Tracking the Tempest (The Jane True Series 2) will be released in July 2010.

Halloween 2009 was a very rushed affair at The Qwillery. I usually have the decorations up the week before. Due to some things that happened over the last week I was only able to decorate on Halloween. I didn't even buy pumpkins until 3:30 Halloween afternoon.

I purchased extra candy because it was a Saturday night. Unfortunately it rained so I've lots of leftover candy. The Almond Joys and Malted Milk Balls are mine!

My favorite decoration is Dead Fred. His head lights up. I also put a strobe at his feet to make him a bit more creepy. I may add a fog machine and some friends for him next year. 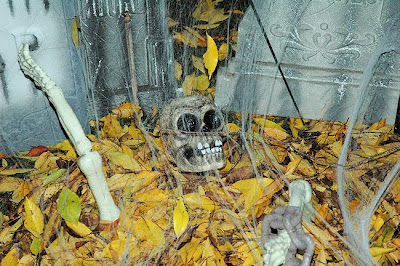 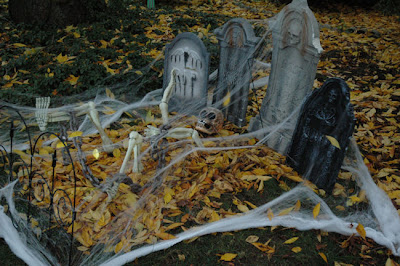 The small humans dressed up as a Gothic Vampire and a Blind Phantom (you can see the red glimmer of the Phantom's heart). 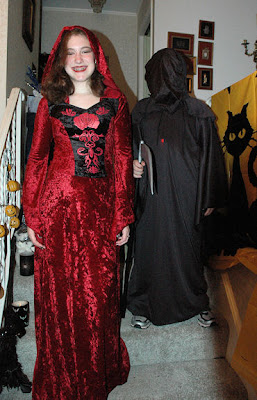 Pumpkin carving was a rushed affair, but I think that they came out fine. The Vampire carved a Vampire pumpkin. The Phantom carved a creepy smile on his pumpkin. 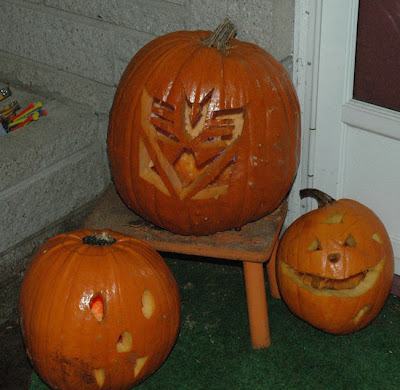 This year I carved the Decepticon symbol (Transformers) at the request of the Blind Phantom, though since he was blind I'm not sure how he knew that I'd carved the correct symbol.

All in all we had a pretty good Halloween. I'm hoping that next year, it will be less hectic!