Please welcome Steve Wiley to The Qwillery. The Fairytale Chicago of Francesca Finnegan is out now from Lavender Line Press. 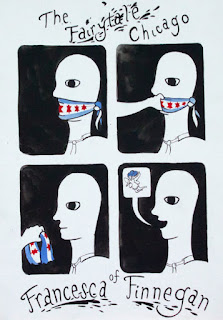 Steve:  I published my first short fiction piece about five years ago by entering a short story contest in a small literary journal. My piece didn’t win the contest, but was a finalist, and so was published. That gave me real confidence in my style of writing and voice. After that, I kept publishing short pieces in literary journals, and actually published a few chapters of this book in literary journals. As far as why I write, I’ve always liked to tell stories, and create art. This book is both.

Steve:  Definitely a pantser. I wrote the middle of this book before I even had an idea of the start and finish. As a reader, I just want to enjoy what I’m reading, strong plot or not. So, I tried to make this book something people could enjoy reading, chapter by chapter, as individual stories which were interesting for the reader to digest, with or without a plot.

Steve:  Finding a big, new, fun idea, which gets the words flowing is difficult. I’m still figuring out what my next project will be. Once I get it, I’ll be fine, but finding the idea can be hard.

Steve:  Everything I read is in what I write, but this book has J.M. Barrie and Lewis Carroll fingerprints all over it. The East Side in this book was inspired by a Wonderland, and Francesca Finnegan is based in many ways on Peter Pan. I also pulled quite a bit from Hans Christian Andersen.

TQ:  Describe The Fairytale Chicago of Francesca Finnegan in 140 characters or less.

Steve:  The novel is a magical redefinition of the city and its citizens, explained through the adventures of a boy and girl aboard a secret L train, which travels through a mythical, East Side of the city.

TQ:  Tell us something about The Fairytale Chicago of Francesca Finnegan that is not found in the book description.

Steve:  I don’t socialize the fact that I pretty much rewrite Chicago history in the book itself, because I was afraid too much history might turn fantasy readers off. But within the book itself, we take major events and places in Chicago history (Chicago fire, Riverview, Fort Dearborn), and blow them up to high fantasy. I hope readers are pleasantly surprised by this, especially those who know Chicago, and appreciate history.

TQ:  What inspired you to write The Fairytale Chicago of Francesca Finnegan? What appeals to you about writing fantasy and in particular a fairytale?

Steve:  I still live near Chicago, and lived within the city itself for many years. I’ve always felt like Chicago was missing a fairytale. New York has a fairytale. London has one. Why not Chicago? I wrote something I would have been interested in reading myself. I also like the idea of a fairytale because they’re an endangered species. Beauty and the Beast was written more than 200 years ago! We cling to these old fairytales, but don’t create new ones. Why?

TQ:  What sort of research did you do for The Fairytale Chicago of Francesca Finnegan?

Steve:  Historical research was definitely needed, but not all that much, just due to the fact I was already pretty well educated in everything Chicago. I think it would have been impossible for someone not from Chicago to write this book. You have to know the city inside and out to rewrite the story of how everything in it came to be.

TQ:  Why did you set the novel in Chicago?

Steve:  I set the novel in Chicago because I love the city itself. I was born there, grew up there, am raising my kids there, and I’ll be buried there. Chicagoans are proud of their city. I wanted to deliver a book the city could be proud of. We give half the proceeds from the book to Chicago Public Schools because we wanted to make the reader feel like they were giving back to the city with each purchase. My mother was also a teacher for 30 years within the city. If this book could raise a meaningful sum of money for Chicago Public Schools, it would be a proper end to the fairytale.

TQ:  In The Fairytale Chicago of Francesca Finnegan who was the easiest character to write and why? The hardest and why?

Steve:  Easiest character was the protagonist Richard Lyons. He was really based on myself in many ways, and we have a lot in common – I’ve been reported missing by my wife, have been a vice president of something, and used to ride the Brown Line to work daily. Hardest character was Francesca Finnegan. I wanted her to be the strange combination of an innocent girl, who was also fearless and mysterious.

TQ:  Which question about The Fairytale Chicago of Francesca Finnegan do you wish someone would ask? Ask it and answer it!

Steve:  Who is your favorite character in the book?

Easily Templeton Goodfellow, the funny old, alcoholic elf. I had fun writing his lines. He’s the friend you call to have a drink, who will never turn you down, and always has a good story to tell.

TQ:  Give us one or two of your favorite non-spoilery quotes from The Fairytale Chicago of Francesca Finnegan.

"Once people stop asking you what your favorite color is, you're done for."

"Within the shallow river valleys of Chicago, there hide undiscovered kingdoms."

Steve:  I’m consumed with marketing activities for the book well into the summer, and after would like to take a break from everything. I think I’ll start my next project in 2018. I’m not certain what that next project will be yet. But, whatever the next project is, you can expect something as unexpected as The Fairytale Chicago of Francesca Finnegan. 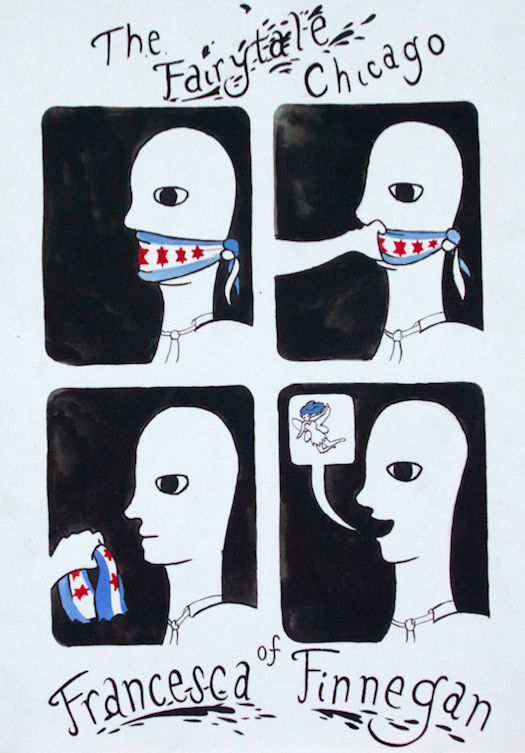 "One of the most captivating and magical books I've read"  ~ Rick Kogan, Chicago Tribune

There is magic in the city...

In Chicago, a secret L train runs through the mythical East Side. On that train, you'll discover fantastical truths about the city, alongside the most incredible cast of characters, including one exceptional girl by the name of Francesca Finnegan.

Once upon an extraordinary time, Francesca invited a boy named Richard aboard the secret L, for an adventure through the East Side. The night was a mad epic, complete with gravity-defying first kisses, spectral cocktails, fabled Ferris wheels, and more. Unfortunately for Richard, the night ended like one of those elusive dreams, forgotten the moment you wake. Now, Richard is all grown up and out of childish adventures, an adult whose life is on the verge of ruin. It will take the rediscovery of his exploits with Francesca, and a reacquaintance with the boy he once was, to save him.

Witty, humorous, and at times profound, this fairytale teaches a lesson - one that adult readers are sure to benefit from.

Half the proceeds from this book are donated to Chicago Public Schools.

Steve is a father, husband, uncle, brother, friend, and purveyor of fairy stories. He grew up in and around Chicagoland, where he still lives with his wife and two kids. He has been published in an array of strange and serious places, from the U.S. Chamber of Commerce in Washington, D.C., to Crannóg magazine in Galway, Ireland. This is his first book. He has an undergraduate degree in something he has forgotten from Illinois State University and a graduate degree in something equally forgotten from DePaul University. Steve once passionately kissed a bronze seahorse in the middle of Buckingham Fountain.