Please welcome Suzanne Johnson to The Qwillery as part of the 2012 Debut Author Challenge Guest Blogs. Royal Street (Sentinels of New Orleans 1), Suzanne's debut, will be published in April 2012.

Fantasy, Meet Reality
On Sunday, August 28, 2005, I piled in a car with two dogs (one a ninety-pounder), an elderly parent, a friend, and her ailing cat, and left home for a two-day trip. It’s what I’d packed for, after all: one change of clothes, only the shoes I was wearing, a book to read (John Berry’s Rising Tide: The Great Mississippi River Flood of 1927 and How It Changed America), and a few cans of dog food. I was pretty much broke, it being two days before payday and, like most people, I lived paycheck to paycheck.

But I didn’t go home on August 30 as planned. In fact, I didn’t go back for almost six weeks. We all lived in a hotel room for a week with our restless pets, and then disbursed to live on the goodwill of friends. When I finally did go home on October 10, I was afraid of what I’d find. (And I really, really grew to hate the irony of that John Berry book.)

I was a New Orleanian, and when I left on August 28, it was a last-minute run from a little storm called Hurricane Katrina. You probably know what happened after that.

For the next couple of years, I fought insurance companies and bureaucrats to get my house repaired. I watched elderly friends grow weak from the stress and die. I watched the city I loved so fiercely as it struggled back to its feet. I worked long hours trying to do my part in helping Tulane get reopened and repaired. I cried a lot.

I don’t say all this as a “poor me,” because I had it SO much better than a lot of folks in New Orleans, including many of my friends and coworkers. But a catastrophe or natural disaster leaves its mark on everyone who goes through it. What do you do with all those unresolved feelings?

For me (and at least two or three other New Orleanians I’ve since met), it became a new endeavor: fiction writing. I’d been a nonfiction writer and editor in higher education for years. But fiction? Moi? Uh-uh.

I left New Orleans in late 2007 for family reasons, and between unresolved Katrina stress and homesickness, I began to write. In early 2009, I finished a book called Royal Street. I didn’t know if it had any commercial legs—after all it was about a national tragedy people are still dealing with…and it was urban fantasy.

Urban fantasy is a genre I loved long before I ever heard the name. Anne Rice introduced me to vampires. Stephen King introduced me to all kinds of scary stuff that might be true (and might, without provocation, eat me). The joy of urban fantasy, for me, is the “what if” factor. What if, in our real world, we could turn the corner and run into a vampire? What if the guy behind the counter at the meat market is a werewolf (who cleans up the scraps between customers)? What if science hasn’t really killed off magic in our world?

What if a wizard got caught in Hurricane Katrina? What if the levees that broke were not only physical but metaphysical? What if more than floodwater swept into New Orleans after the storm? “What if” is the heart of any story, but it’s especially strong at the crossroads of fantasy and reality that we call “urban fantasy” or “contemporary fantasy.”

Royal Street, at its heart, is a love song to the hometown of my heart. It’s a story about what we do when the things we’ve learned to depend on are taken away from us, abruptly and unexpectedly. It’s about the power of human memory to keep alive those we love. It’s about how even in the worst of times, good things can happen if our hearts are open to them. The wizards of Royal Street aren’t real, but the post-Katrina world they live in is.


A contest! Royal Street, the first book in the Sentinels of New Orleans series, will be released by Tor Books on April 10 and is available for preorder at the usual places online. I’ll be giving away a signed copy of Royal Street to a commenter who answers one of these questions:

Have you read a book set around a natural disaster, or what’s your favorite book set in New Orleans? (Note: the winner will receive the book in March, as soon as I have author copies available.)


To find out more about me or the Sentinels of New Orleans series, visit my Preternatura Blog at http://suzanne-johnson.blogspot.com, or my website at www.suzanne-johnson.com. 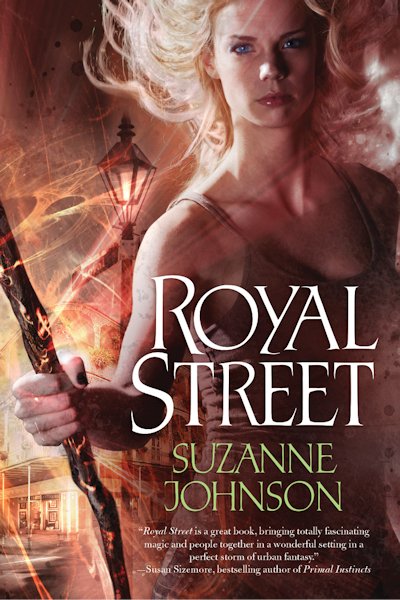 As the junior wizard sentinel for New Orleans, Drusilla Jaco’s job involves a lot more potion-mixing and pixie-retrieval than sniffing out supernatural bad guys like rogue vampires and lethal were-creatures. DJ’s boss and mentor, Gerald St. Simon, is the wizard tasked with protecting the city from anyone or anything that might slip over from the preternatural beyond.
Then Hurricane Katrina hammers New Orleans’ fragile levees, unleashing more than just dangerous flood waters.
While winds howled and Lake Pontchartrain surged, the borders between the modern city and the Beyond crumbled. Now, the undead and the restless are roaming the Big Easy, and a serial killer with ties to voodoo is murdering the soldiers sent to help the city recover.
To make it worse, Gerry has gone missing, the wizards’ Elders have assigned a grenade-toting assassin as DJ’s new partner, and undead pirate Jean Lafitte wants to make her walk his plank. The search for Gerry and for the serial killer turns personal when DJ learns the hard way that loyalty requires sacrifice, allies come from the unlikeliest places, and duty mixed with love creates one bitter roux. 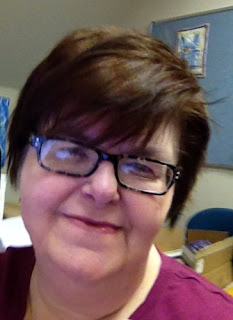 Urban fantasy author Suzanne Johnson grew up in rural Northwest Alabama, halfway between the Bear Bryant Museum and Elvis’ birthplace. That, plus living in New Orleans for fifteen years, has given her a highly refined sense of the absurd and an ingrained love of SEC football and fried gator on a stick. Her debut novel, Royal Street, will be released on April 10, 2012, by Tor Books, and will begin an urban fantasy series set in New Orleans during and immediately after Hurricane Katrina. The second book in the series, River Road, will be released in November 2012. By day, Suzanne is an editor at Auburn University despite being a graduate of the University of Alabama, which she thinks makes her bilingual. She lives in Auburn with two dogs named after professional wrestlers—a story she is not inclined to share (unless you catch her at the Napoleon House during Authors After Dark 2012).

What:  One commenter will win a signed copy of Royal Street (Sentinels of New Orleans 1) from Suzanne. Note: the winner will receive the book in March, as soon as Suzanne has author copies available.

How:  Leave a comment answering one of the following questions posed by Suzanne:


Have you read a book set around a natural disaster, or
what’s your favorite book set in New Orleans?
Please remember - if you don't answer the question your entry will not be counted.

Who and When:  The contest is open to all humans on the planet earth with a mailing address. Contest ends at 11:59pm US Eastern Time on Wednesday, February 22, 2012. Void where prohibited by law. No purchase necessary. You must be 18 years old or older to enter.


*Giveaway rules are subject to change.*
Posted by Qwill at 7:54 AM