What's Up for the Debut Author Challenge Authors? - Part 22 From the author of Energized and Guarded comes an all-new novella in the series that’s “a perfect mix of paranormal, suspense, and romance”(SnS Reviews).

After nearly dying on assignment, Tidewater police officer Zig Harmon has been awarded the Silver Star and desk duty. But handling every case that walks through the door while his entire department is out hunting a serial killer is nothing compared to dealing with his former flame, Karma De La Cruz.

As much as she hates it, Karma knows that her best chance of finding the kidnapped baby haunting her visions is the man she once left behind. Forced to work together, Karma and Zig start to realize that they may have let go of something incredible. But now, time is running out, both for the missing infant and for their chance to start again...

Includes an exclusive preview of the latest Tidewater novel, Energized. 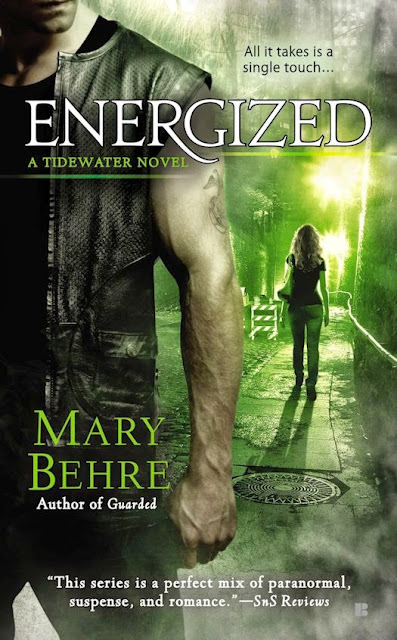 In the new Tidewater novel by the author of Guarded, a kiss between strangers draws both into unexpected danger and unforgettable desire . . .

Hannah Halloran has always believed in her gift. The things she sees through her psychic touch have never led her wrong before. Not when they led her to an unforgettable night with a sexy marine at a bar. Not when she felt a need to leave her home and find the sisters she barely knows. And not now, when she is an unwilling witness to a brutal murder . . .

All Niall Graham wants is some peace. He’s recovering from the horrors of war, struggling to save his family’s restaurant, and desperate to forget Hannah, the beautiful woman who left him with memories of a mind-blowing night together and a bogus phone number. But a quiet life is hard to manage—especially when Hannah strides back into his restaurant with the news that a serial killer is on the loose and lurking closer than anyone could have guessed . . . 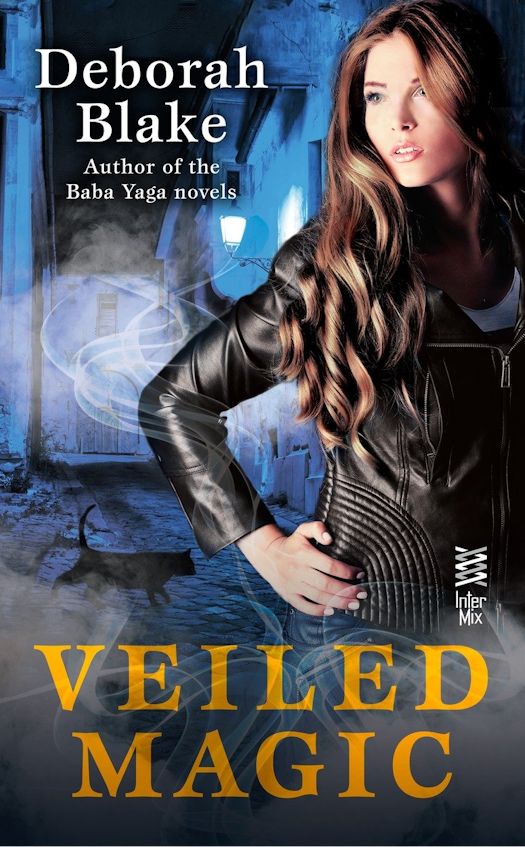 A spellbinding new novel from the author of the Baba Yaga novels.

Since Witches came out of the broom-closet in the early 21st century, they have worked alongside humans as police officers, healers, stock traders, and more. But they aren’t the only paranormal entities in our world…

Police officer and Witch Donata Santori spends her days interrogating dead witnesses by summoning their spectral forms. Normally the job is little more than taking statements and filing reports. But when she’s called in on the case of a murdered art restorer, she finds herself suddenly in possession of a mystical portrait that both the human and paranormal communities would kill to get their hands on.

Unable to take on the forces hunting her alone, Donata seeks help from two unlikely and attractive allies: a reluctant shape-changer and a half-dragon art forger. But as the three of them hurry to uncover the truth about the powerful painting, Donata realizes that she’s caught in the middle of not one but two wars—one for possession of the painting’s secrets and one for possession of her heart…

Includes an exclusive preview of the next Baba Yaga novel, Wickedly Powerful. 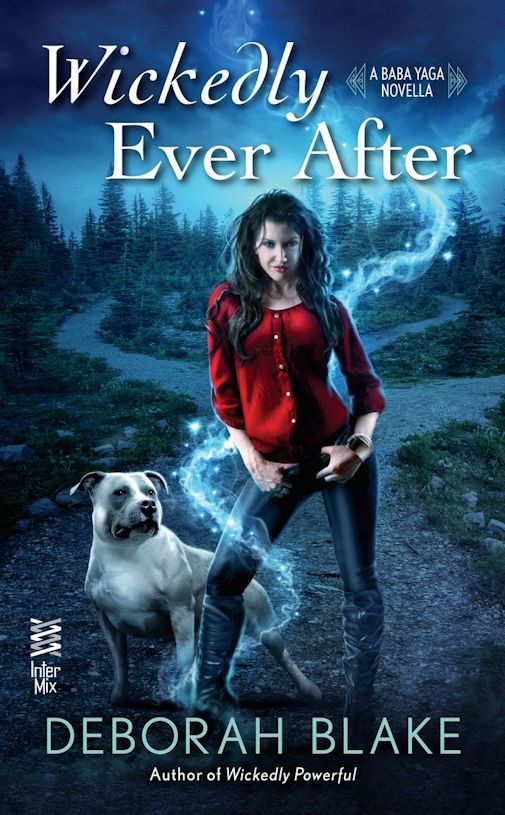 Known as the wicked witch of Russian fairy tales, Baba Yaga is not one woman, but rather a title carried by a chosen few. They keep the balance of nature and guard the borders of our world, but don’t make the mistake of crossing one…

Having triumphed over a powerful enemy and ended up with both a wonderful guy—Sheriff Liam McClellan—and an adorable adopted daughter to raise as a Baba Yaga, Barbara Yager is ready to welcome her happily ever after.

But first she must bring Liam to the Otherworld and get the Queen’s permission to marry him. The Queen, however, is not so easily persuaded. She gives them three impossible tasks to complete in two weeks’ time—and if they fail Barbara will have to watch Liam slowly age and die like all humans, and kiss her happily ever after good-bye forever.

Includes an exclusive preview of the next Baba Yaga Novel, Wickedly Powerful 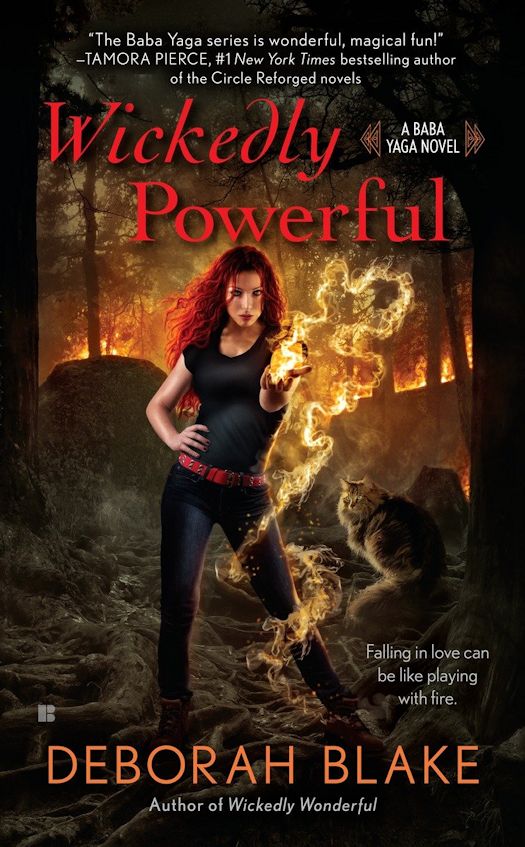 The author of Wickedly Wonderful returns to her “addicting”* world of Russian witches in the latest Baba Yaga novel.

Known as the wicked witch of Russian fairy tales, Baba Yaga is not one woman, but rather a title carried by a chosen few. They keep the balance of nature and guard the borders of our world, but don’t make the mistake of crossing one of them…

The only thing more fiery than Bella Young’s red hair is her temper. She knows that a Baba Yaga’s power without strict control can leave the people she cares about burned, so to protect her heart—and everyone around her—the only company she keeps is her dragon-turned-Norwegian-Forest-cat, Koshka.

But when Bella is tasked with discovering who’s setting magical fires throughout Wyoming’s Black Hills, she finds herself working closely with former hotshots firefighter Sam Corbett—and falling hard for his quiet strength and charm.

Sam may bear the scars of his past, but Bella can see beyond them and would do anything to help him heal. Only before she can rescue her Prince Charming, she’ll have to overcome the mysterious foe setting the forest fires—a truly wicked witch who wields as much power and even more anger than Bella…

From the author of the Baba Yaga novels, a brand new series set in the same “addicting”* world, filled with wild magic, enchanting damsels, and the irresistibly daring men who serve the Baba Yagas…

The Riders are three immortal brothers who protect the mythical Baba Yagas. But their time serving the witches has ended—and their new destinies are just beginning…

Ever since a near-fatal mistake stripped Mikhail Day and his brothers of their calling to be Riders, Day has hidden from his shame and his new, mortal life in a remote cabin in the Adirondack mountains. But when a desperate young woman appears on his doorstep, he cannot resist helping her—and cannot deny how strongly he’s drawn to her…

For generations, women in Jenna Quinlan’s family have been cursed to give up their first born child to the vengeful fairy Zilya. When Jenna finds herself unexpectedly pregnant, she is determined to break her family’s curse and keep her baby, even if it means teaming up with a mysterious and charismatic man with demons of his own…

To unravel the curse, Jenna and Day will have to travel deep into the Otherworld. But the biggest challenge of the journey might not be solving an ancient puzzle but learning to heal their own broken hearts… 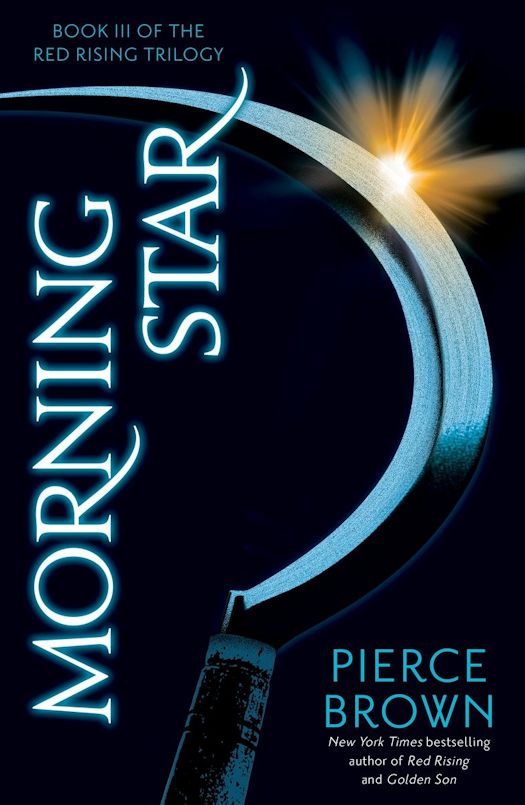 Red Rising thrilled readers and announced the presence of a talented new author. Golden Son changed the game and took the story of Darrow to the next level. Now comes the exhilarating conclusion to the Red Rising Trilogy: Morning Star.

Darrow would have lived in peace, but his enemies brought him war. The Gold overlords demanded his obedience, hanged his wife, and enslaved his people. But Darrow is determined to fight back. Risking everything to transform himself and breach Gold society, Darrow has battled to survive the cutthroat rivalries that breed Society’s mightiest warriors, climbed the ranks, and waited patiently to unleash the revolution that will tear the hierarchy apart from within.

Finally, the time has come.

But devotion to honor and hunger for vengeance run deep on both sides. Darrow and his comrades-in-arms face powerful enemies without scruple or mercy. Among them are some Darrow once considered friends. To win, Darrow will need to inspire those shackled in darkness to break their chains, unmake the world their cruel masters have built, and claim a destiny too long denied—and too glorious to surrender. 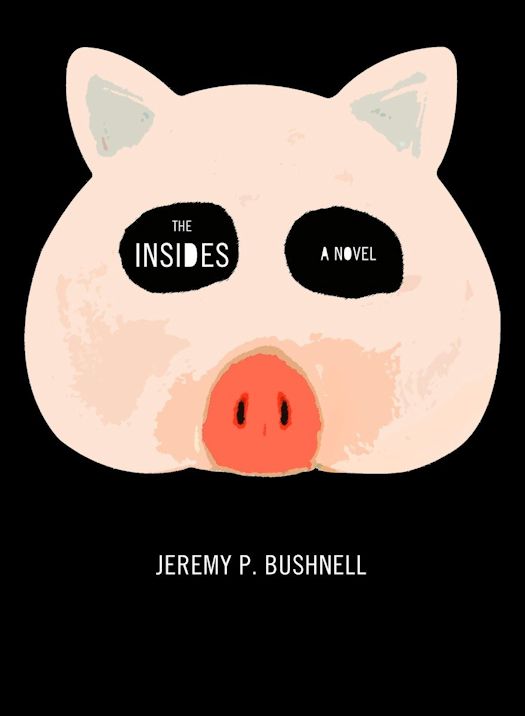 Ollie Krueger’s days as a punk kid practicing street magic are are mostly behind her. Now she’s a butcher at Carnage, a high-end restaurant offering deconstructed takes on meat, and on the busiest nights of the week she and her partner, Guychardson, race to see who can produce more finished cuts. Ollie’s the better butcher, but somehow Guychardson almost always wins.  And Ollie thinks maybe it’s because the mysterious knife he uses is magic.

Before she knows it, Ollie’s interest in the knife has thrown her square in the path of a dangerous ex-marine called “Pig” and his hired psychic, Maja, who are on the hunt for the knife too—who want it so badly, in fact, that they might kill for it.

Now, magic is back in Ollie’s life and she’s being chased through New York City, with the fabric of space-time tattering around her and weird inter-dimensional worms squirming their way into her kitchen. And before all this is over she’s going to need to face up to the Possible Consequences of some bad decisions, to look at the uncomfortable truths that she stuffed away long ago, deep down inside . . . 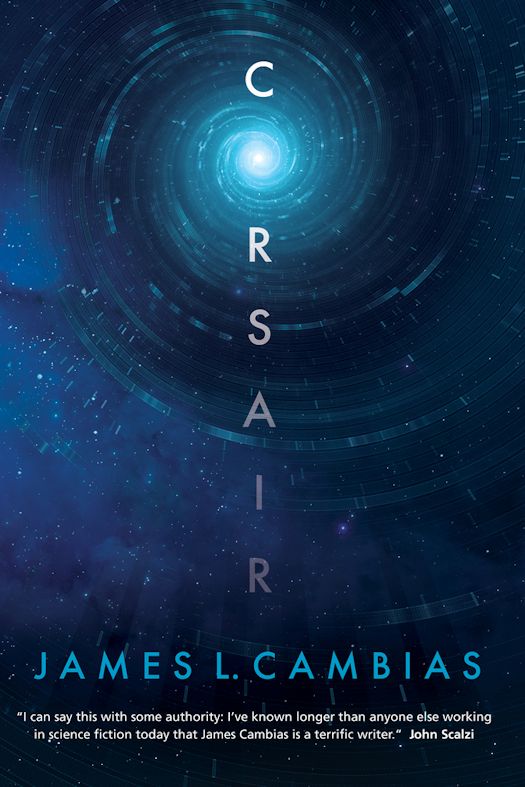 In the early 2020s, two young, genius computer hackers, Elizabeth Santiago and David Schwartz, meet at MIT, where Schwartz is sneaking into classes, and have a brief affair. David is amoral and out for himself, and soon disappears. Elizabeth dreams of technology and space travel and takes a military job after graduating. Nearly ten years later, David is setting himself to become a billionaire by working in the shadows under a multiplicity of names for international thieves, and Elizabeth works in intelligence preventing international space piracy. With robotic mining in space becoming a lucrative part of Earth's economy, shipments from space are dropped down the gravity well into the oceans. David and Elizabeth fight for dominance of the computer systems controlling ore drop placement in international waters. If David can nudge a shipment 500 miles off its target, his employers can get there first and claim it legally in the open sea. Each one intuits that the other is their real competition but can't prove it. And when Elizabeth loses a major shipment, she leaves government employ to work for a private space company to find a better way to protect shipments. But international piracy has very high stakes and some very evil players. And both Elizabeth and David end up in a world of trouble.