Interview with Megan E. O'Keefe, author of Steal the Sky


Please welcome Megan E. O'Keefe to The Qwillery as part of the 2016 Debut Author Challenge Interviews. Steal the Sky (Scorched Continent 1) was published on January 5th by Angry Robot. 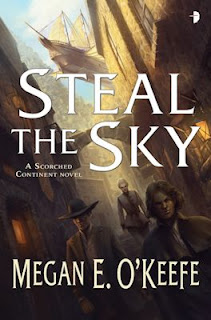 Megan:  My first experiences with writing were during role playing games (Dungeons & Dragons and White Wolf Games, primarily) in the 90’s and 00’s. I mucked about in BBS’s and forums playing characters, and also met with a local group of friends to play. We had a lot of fun crafting worlds, characters, and adventures, but I didn’t think about telling stories seriously until a few years ago, in 2013. I started listening to the Writing Excuses podcast, which put the idea in my head that I could try writing my own stories, and soon was jumping into writer-land with both feet.

Megan:  A little of both! I tend more toward the plotting side of things, but I always allow room to wander off the path I’ve set if inspiration draws me in a different direction.

Megan:  Patience, if I’m being honest. I love to push forward in a creative rush, which is why I love drafting. But when I hit a spot that requires me to slow down, and possibly allow my subconscious to work through a problem, I can get a little impatient. I usually handle this by doing something physical and repetitive, such as going for a walk.

Megan:  The Writing Excuses podcast has been hugely influential in how I approach the actual process of writing. Listening to the wide variety of ways the different authors on the show approach the same problems has given me a pretty big toolbox when it comes to story-crafting, and a willingness to experiment with technique.

TQ:  Describe Steal the Sky in 140 characters or less.

Megan:  Two conmen attempt the heist of an airship. Things... do not go as planned.

TQ:  Tell us something about Steal the Sky that is not found in the book description.

Megan:  One of the cool behind-the-scenes bit of worldbuilding I did was to increase the oxygen in the atmosphere slightly. This does interesting things for flight capability, even outside of the magical selium gas they use to give their ships lift, but it also does something a bit sinister to the insect population. The bugs on the Scorched continent are huge. Spiders run as big as your face, and bees as big as your fist.

TQ:  What inspired you to write Steal the Sky? What appeals to you about writing Fantasy?

Megan:  I wanted to write something fun and experimentative, something that pushed genre boundaries. I knew where I wanted the story to begin - with my conman protagonist waiting to be interviewed by the local police - and the rest flowed from there. Ultimately, fantasy appeals to me because of its inventiveness. The stranger a world and its characters, the better. It’s this strangeness, this removal from the expected, that can occasionally help us reexamine our own beliefs through fresh eyes.

TQ:  What sort of research did you do for Steal the Sky?

Megan:  Quite a lot of research went into the geology involved in making the Scorched Continent, with its multitude of volcanoes, work properly while still being habitable. I also spent quite a lot of time working out the physics involved with the airships. Even when you have a magical, movable gas doing the lifting, you still have to create a believable steering system, otherwise you’d just end up with ships drifting along with the direction of the breeze - not so great for commerce!

Megan:  Detan, my conman protagonist, was definitely the easiest for me to write. His voice has a certain rhythm to it that is really easy to get into the flow of. I had a lot of fun coming up with his quips, and diving into his convoluted thought processes. As for the most difficult, that would have to be Pelkaia. She’s fun to write for her own reasons; she’s determined, competent, and a little bit manic. But she’s dealing with some deep-seated trauma that, without being too spoilery, is driving her to do some really terrible things.

TQ:  Which question about Steal the Sky do you wish someone would ask? Ask it and answer it!

Megan:  Can I give you bags of money to make a movie of Steal the Sky? But really, I’d love the opportunity to talk more about the presence of women in the book. They’re everywhere throughout the plot, driving action and throwing wrenches in the works when necessary. They’re all vastly different people from each other, with their own likes, dislikes, and motivations. That may not seem that noteworthy, but as a young woman growing up reading fantasy I was always disappointed by how one-note the female characters often seemed. I wanted to make sure that any young woman reading my work would find many different possible representations of herself within the story; both heroes and villains.

TQ:  Give us one or two favorite non-spoilery quotes from Steal the Sky.

Megan:  One of my favorite parts of the book is the dialogue between the major players in the story. In this snippet, Detan is protesting that the Watch-captain, Ripka, should know why he’s been arrested. Detan begins the dialogue:

Megan:  Right now I’m in the middle of revisions for Book Two, and plan on diving into the draft of Book Three shortly thereafter. Then it’s on to the next series I want to tackle, and I’ve a list of ideas for books that my agent has helpfully arranged in order of what he would like to see next. Of course, the more I work on ideas, the more ideas I get. I’ll be typing away until my fingers fall off, and then I’ll use my toes.

Megan:  Thank you for hosting me!

Detan Honding, a wanted conman of noble birth and ignoble tongue, has found himself in the oasis city of Aransa. He and his trusted companion Tibs may have pulled off one too many cons against the city’s elite and need to make a quick escape. They set their sights on their biggest heist yet – the gorgeous airship of the exiled commodore Thratia.

But in the middle of his scheme, a face changer known as a doppel starts murdering key members of Aransa’s government. The sudden paranoia makes Detan’s plans of stealing Thratia’s ship that much harder. And with this sudden power vacuum, Thratia can solidify her power and wreak havoc against the Empire. But the doppel isn’t working for Thratia and has her own intentions. Did Detan accidentally walk into a revolution and a crusade? He has to be careful – there’s a reason most people think he’s dead. And if his dangerous secret gets revealed, he has a lot more to worry about than a stolen airship. 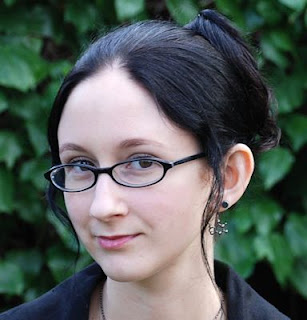 Megan E. O’Keefe lives in the Bay Area of California and makes soap for a living. (It’s only a little like Fight Club.) She has worked in arts management and graphic design, and spends her free time tinkering with anything she can get her hands on.

Megan is a first place winner in the Writers of the Future competition, vol. 30. Steal the Sky is her first novel.

You can find Megan online at meganokeefe.com and @MeganofBlushie on Twitter.