Interview with Scott Allan Morrison and Review of Terms of Use


Please welcome Scott Allan Morrison to The Qwillery as part of the 2016 Debut Author Challenge Interviews. Terms of Use was published on January 1st by Thomas & Mercer. 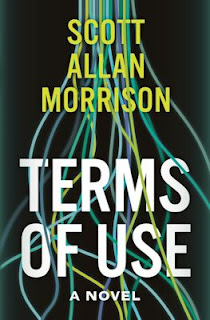 Scott:  I was a journalist for almost two decades so I’ve been writing for quite a while. This is my first go around with fiction. I decided to attempt a novel because it was the best vehicle through which I could explore the “what if?” questions I had about social media.

Scott:  Plotter. The interwoven story lines in this novel were far too complex to wing it.

Scott:  My biggest challenge in writing Terms of Use was to let my words flow freely. Brevity is highly valued in journalism. Reporters cut to the facts, strip out extraneous details, and use quotes sparingly. Tackling a novel meant I had to rethink my approach to writing.

Scott:  Journalism helped develop my sense of story and I relied heavily on this skill as I developed the plot for Terms of Use. I also studied works by other thriller writers to help me with pacing and structure.

TQ:  Describe Terms of Use in 140 characters or less.

A deadly conspiracy corrupts the world’s biggest social network – and only one man can stop it.

TQ:  Tell us something about Terms of Use that is not found in the book description.

Scott:  The butler most definitely did not do it.

TQ:  What inspired you to write Terms of Use? What appealed to you about writing a Thriller especially a TechnoThriller?

Scott:  TERMS OF USE began as a thought exercise: during my years as a Silicon Valley reporter, I always wondered how we could trust the companies that amass, store and analyze all our data. What might happen if the wrong people assumed control of these companies (and every electronic bread crumb we’ve left behind)? How bad could it get? As you see in TERMS OF USE, things could get pretty wild.

I decided to write a thriller because the subject matter seemed to lend itself to this genre and I wanted to create a fast-paced and entertaining novel.

TQ:  What sort of research did you do for Terms of Use?

Scott:  I had a fair bit of background knowledge since I covered technology for so long, so the bulk of my research consisted of interviews with scores of Silicon Valley coders, network architects, security experts, IT consultants, entrepreneurs and even a venture capitalist. We discussed all sorts of hypothetical scenarios and they proved to be a great sounding board for me as I endeavored to make the scenes plausible and the details accurate. They also assured me I wasn’t being too paranoid about the power of social media. In a similar vein, I interviewed a doctor and quite a few law enforcement officers who helped me with terms, procedures and tactics. They all told me some amazing stories, several of which are in Terms of Use.

Scott:  Sergio Mansour, the lead character, kind of wrote himself. He is a composite of several Silicon Valley insiders I know and I cherry picked from among their skills and personalities as necessary. Writing Malina, Sergio’s love interest, was very difficult because she makes a controversial decision early in the novel to help him. Her reasons become clear toward the end of the novel but I didn’t want to reveal her motives too early. This meant I had to make her actions (and her relationship with Sergio) credible even though the reader doesn’t yet know why she’s going along with him. I relied on advice from many female friends who helped shape Malina’s personality. They assured me they might well have made the same choices in the right circumstances.

TQ:  Which question about Terms of Use do you wish someone would ask? Ask it and answer it!

Scott:  Q: How much of this is true? A: Almost all of it. Or better said, almost all of it could be true if the wrong people took control of your social media data.

TQ:  Give us one or two favorite non-spoilery quotes from Terms of Use.

Scott:  “And it raises a very disturbing question: If you make a decision that was a foregone conclusion based on the stream of information you’ve been fed, have you really exercised free will?”

Scott:  My pleasure. Thanks for the opportunity! 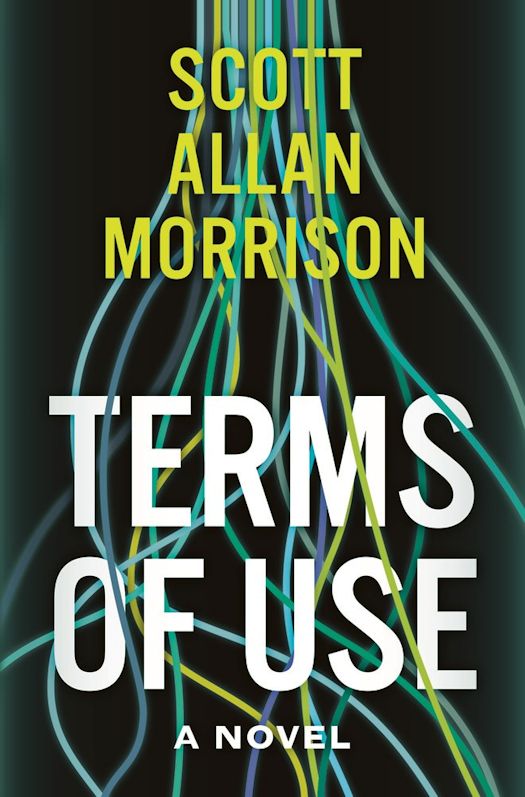 Circles is the most popular social network in the world: vast, ubiquitous, and constantly evolving. Days before expanding into China, Circles suffers a devastating cyberattack—and a key executive is brutally murdered.

As he fights to save the company he helped build, top engineer Sergio Mansour uncovers evidence of a massive conspiracy that turns the power of Circles against its users. But as Sergio investigates, someone is watching his every move—someone ruthless enough to brand him a criminal and set a vicious hit man on his trail.

Desperate to clear his name, Sergio turns to Malina Olson, a beautiful and headstrong doctor who has an agenda of her own. Now, he and Malina must survive long enough to expose the truth in a world without hiding places, where a single keystroke can shift the global balance of power.

Terms of Use is the debut novel by Scott Allan Morrison. It is a cyber/technothriller featuring 50+ year-old Sergio Mansour, an IT engineer at Circles (think Facebook on steroids). He's been with Circles from the start helping to build the worldwide social network that is about to expand into China. He now works in research for Circles and is just about to announce that he's found the ultimate way to protect privacy.

Sergio is an unlikely hero, but he's incredibly resourceful and highly intelligent. Things suddenly start to go badly at Circles - a huge cyberattack and then the murder of his friend/co-worker from Circles. Sergio is framed as a terrorist who is possibly involved in the murder, runs and ends up on the doorstep of Malina Olson. He's had one date with her so I was surprised that he ran to her and even more surprised that she agreed to help him.

Sergio is a very likable and relatable character. His background is interesting and his computer skills are top notch. It is a great deal of fun to watch Sergio try to figure out what is going on with Circles and why he is being framed and by whom. His ability to think ahead and figure things out is just keeping him and Malina safe. Malina Olson is an intelligent woman who I spent much of the novel wondering about. Why was she helping Sergio? Is she also going to act against him? Why does her behavior make no sense? Fortunately the reason is eventually made apparent and it is not at all what I suspected.

There is enough tech in Terms of Use to add layer upon layer of believability without being overwhelming if you are not computer savvy.  The secondary characters are well-developed and there are some really scary bad actors who are out to kill Sergio, Malina and anyone who gets in their way.

Terms of Use is a both a cautionary tale regarding tech used against its users and a fun and exciting read. It is crisply written, fast-paced and thrilling. You may never look at social networks the same way again and will definitely be checking your privacy settings.

Scott Allan Morrison was a journalist for almost twenty years, covering politics, business, and technology in Mexico, Canada, and the United States. Morrison arrived in Silicon Valley as a reporter for the Financial Times during the darkest days of the dot-com crash. He later wrote about the Web 2.0 boom for Dow Jones Newswires and the Wall Street Journal. Over the course of a decade, Morrison covered most of the world's top tech companies and chronicled many of Silicon Valley's greatest stories, including the rise of Internet insecurity and the explosion of social media. Before setting his sights on journalism, he spent four years teaching English and traveling in Southeast Asia. He speaks fluent Spanish and very rusty Mandarin. He lives in Northern California with his wife and his hockey sticks.