Please welcome Charlie Jane Anders to The Qwillery as part of the 2016 Debut Author Challenge Interviews. All the Birds in the Sky was published on January 26th by Tor Books. 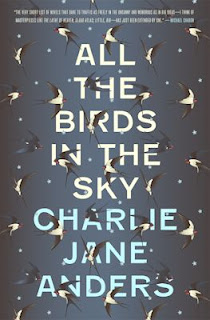 Charlie Jane Anders:  I've been writing for as long as I can remember! I started out when I was a little kid. When I was in third grade, I filled all my school workbooks with Doctor Who fanfic. I was always making up stories in my head.

CJA:  I'm like some kind of weird mish-mash. It kind of depends on the story -- sometimes, I get a story in my head, and I know exactly how it progresses and what the ending needs to be. That's only happened with short fiction thus far, and it's pretty rare in any case. But I try to figure out where the story is going and where it's supposed to end up, as I go along. At the same time, I usually don't outline before I write a story. I will write a draft (or two or three) and then outline it, trying to nail down exactly what the key things that happen are, and exactly what order they need to happen in.

CJA:  It depends on which day you ask. But probably the biggest challenge is getting to the emotional core of the story. The thing that is the real source of the emotion and passion and intensity -- the one relationship that drives the whole thing, or the desire that one character has that makes everything go. Finding that emotional core is a nightmare, and it never gets easier the next time around. And then once you find it, holding on to it and building everything around it. It's a huge pain.

CJA:  There are so many authors who have influenced me massively. Probably my biggest influences are Douglas Adams and Doris Lessing, though.

TQ:  Describe All the Birds in the Sky in 140 characters or less.

CJA:  Can magic and science mix? A witch and a mad scientist might just be the only ones who can understand each other.

TQ:  Tell us something about All the Birds in the Sky that is not found in the book description.

CJA:  There is a lot of weird food in there, including Passive-Aggressive Lasagna. And chocolate-flavored poison.

TQ:  What inspired you to write All the Birds in the Sky? What appeals to you about writing Contemporary Fantasy?

CJA:  I wanted to write the kind of books that excited me when I was younger, those weird genre-defying books where you didn't know what to expect every time you turned the page. And I love stories where people come into their power, but then also realize that having power doesn't miraculously solve all your problems, and you still have to figure out how to be a good person.

TQ:  What sort of research did you do for All the Birds in the Sky?

CJA:  There was a ton of weird research that went into getting this right, on everything from computer science (because of the super computer that Laurence, the mad scientist, creates) to physics (because of the things he helps invent later in the book.) I bugged tons of experts to give me their feedback on various aspects of the science in the book, because I wanted all of the science to feel at least semi-plausible -- that way, the magic could be kind of wild and out there, but it was put up against some crazy science that was rooted in reality.

CJA:  The characters were all kind of tough to write, but the most fun to write was probably Theodolphus, the assassin who becomes a middle-school guidance counselor. He is just such a bizarre character, his scenes could have gone on for pages and pages. (And in some cases, they did -- I had to cut a lot of stuff.) There were some characters in the book where I was writing people from very different cultural backgrounds, because it was important to me to depict my near-future San Francisco as a diverse city. And that meant I had to spend a lot of time talking to people who came from other cultures, to make sure I was getting stuff right. I'm thinking of Ernesto, the leader of the magical community in San Francisco, in particular. As a white person, I feel like it's on me to do the homework when I wrote characters of color, and that's a process that ought to be difficult.

TQ:  Give us one or two of your favorite non-spoilery quotes from All the Birds in the Sky.

CJA:  Probably my favorite line from the book is the one Laurence says halfway through: “You know… no matter what you do, people are going to expect you to be someone you’re not. But if you’re clever and lucky and work your butt off, then you get to be surrounded by people who expect you to be the person you wish you were.” That just sums up a lot for me, both about what's going in this book, and about life in general.

CJA:  I'm working on a second novel for Tor Books -- this one is a straight-up science fiction novel, set on another planet, and it is basically kicking my butt. I'm at that stage right now where I keep asking "What the hell was I thinking?" All those ideas that seemed so cool and exciting when I started on this project are starting to feel dumb and unworkable, and I’m beating my head against the wall over and over. The good news is, I've been here before, and I have some faith that I'll make it work in the end. (The bad news? Some of those cool ideas probably ARE dumb and/or unworkable, and I won't know which ones they are for another few months, and that's if I'm lucky.) 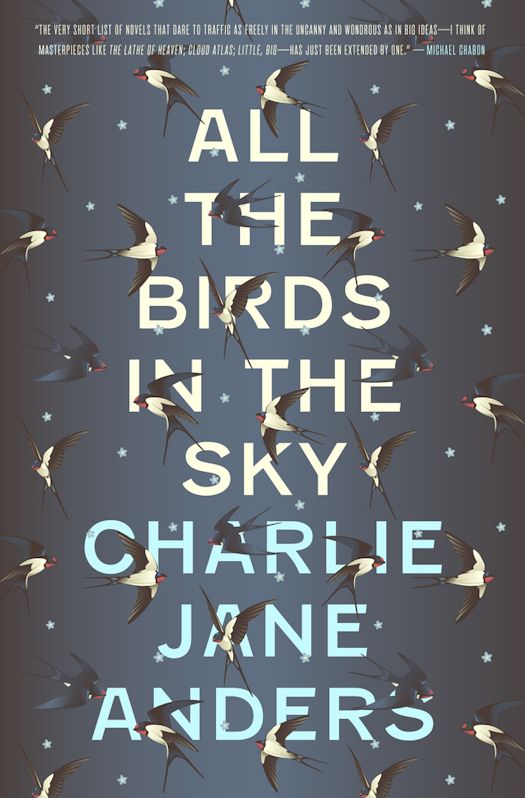 From the editor-in-chief of io9.com, a stunning novel about the end of the world--and the beginning of our future

Childhood friends Patricia Delfine and Laurence Armstead didn't expect to see each other again, after parting ways under mysterious circumstances during middle school. After all, the development of magical powers and the invention of a two-second time machine could hardly fail to alarm one's peers and families.

But now they're both adults, living in the hipster mecca San Francisco, and the planet is falling apart around them. Laurence is an engineering genius who's working with a group that aims to avert catastrophic breakdown through technological intervention. Patricia is a graduate of Eltisley Maze, the hidden academy for the world's magically gifted, and works with a small band of other magicians to secretly repair the world's every-growing ailments. Little do they realize that something bigger than either of them, something begun years ago in their youth, is determined to bring them together--to either save the world, or plunge it into a new dark ages.

A deeply magical, darkly funny examination of life, love, and the apocalypse.

Patricia Delfine and Laurence Armstead are awkward pre-teens with parents who do not understand them. They barely understand themselves. Their lives intersect when they are in middle school (where horrible things happen). They are both captivating and interesting for entirely different reasons. Laurence is a person of science; Patricia is a person of magic. They are friends and not friends, but they always seem to have each other's backs in middle school. For years they don't see each other. They grow up and reconnect as the world is more and more falling apart - superstorms, famine, water wars, disease, etc. Patricia is a powerful witch who doesn't understand everything she can do yet despite her training, but is working to save the world. Laurence is a genius also working to save humanity through science. Obviously they have different approaches to what that means.

All the Birds in the Sky is deeply character-driven. Patricia and Laurence are such vibrant characters it seems that they could have carried the story on their own, but Anders populates their world with wonderful secondary characters that add layers of depth to the story, marvelous magic and cutting edge/weird science.

Anders writing is spellbinding - she transports you deeply into this fabulous story. All the Birds in the Sky has everything I look for in a novel - great writing, wonderful characters and a fascinating, deeply engaging story. I was upset when the book ended because I wanted more! All the Birds in the Sky is an exhilarating, exuberant, magical novel that I very highly recommend.

Charlie Jane Anders is an American journalist, editor, and fiction writer. Her novel Choir Boy won a Lambda Literary Award in 2005. She lives in the San Francisco Bay Area, where she is managing editor of the science fiction website io9.