Now that 2015 has come to a close, some of us at The Qwillery are going to share our Top, Best, and/or Favorite books on last year. Here are Brannigan's Top Four Books of 2015:

My favorite science fiction book of the year is The Void by Timothy S. Johnston. It's the last book in a genre-bending trilogy. The trilogy used its galaxy's many different environments to create a dramatic, engaging story with a satisfying ending—and there's nothing better than a satisfying ending to a great trilogy. 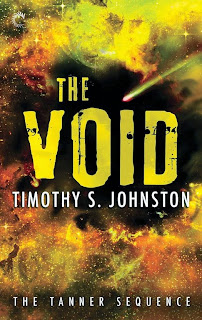 It would be easier to kill him than to trust him.

Transporting a serial killer might seem like a simple job for CCF Homicide Investigator Kyle Tanner. After spending years apprehending murderers, he's ready to hang up his pistol. Babysitting a prisoner will bring him to Alpha Centauri, where he can search for a way to escape the CCF forever.

If he makes it.

When his ship breaks down in deep space and a CCF research vessel comes to his aid, Tanner realizes he's in terrible danger: the scientists on board have blocked his distress call. And when Tanner's prisoner escapes, he begins to suspect that the proximity of the research vessel had nothing to do with luck and everything to do with the CCF's relentless reach.

Facing near-certain death by his own organization, Tanner must unravel a tangled skein of vengeance, duplicity and murder in deep space. But he's being held at the will of master puppeteers, and if he can't cut the strings, he'll dance straight to a gruesome, excruciating death....


My favorite fantasy book of the year is The Grace of Kings by Ken Liu. It's an Asian-influenced epic fantasy with some wonderfully engaging characters. The world building is top notch and I can't wait to dig into the next book in the series. 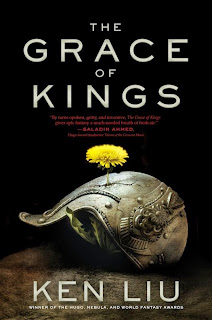 Two men rebel together against tyranny—and then become rivals—in this first sweeping book of an epic fantasy series from Ken Liu, recipient of Hugo, Nebula, and World Fantasy awards.


My favorite horror book of the year is The Devil's Only Friend by Dan Wells. Wells breathed new life in his first trilogy by taking John out of his small-town life and throwing in an entirely new environment with a whole new cast of supporting characters. He raised the stakes and added to the mythology of his creatures. I can't wait to see where he takes us. 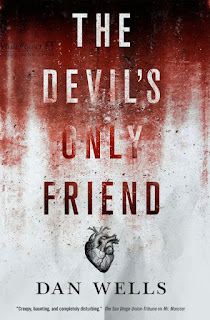 John Wayne Cleaver hunts demons: they've killed his neighbors, his family, and the girl he loves, but in the end he's always won. Now he works for a secret government kill team, using his gift to hunt and kill as many monsters as he can . . .

. . . but the monsters have noticed, and the quiet game of cat and mouse is about to erupt into a full scale supernatural war.

The Devil's Only Friend is the first book in a brand-new John Wayne Cleaver trilogy by New York Times bestselling author Dan Wells.


My favorite graphic novel of the year goes to The Creeps: Book 1 Night of the Frankenfrogs by Chris Schweizer. This is a children's horror story, but it shows Schweizer's talent that he can entertain a man in his late 30s. There are plenty of twists and humor along the way and his art style is refreshingly one-of-a-kind. Do your inner child a favor and read this book. 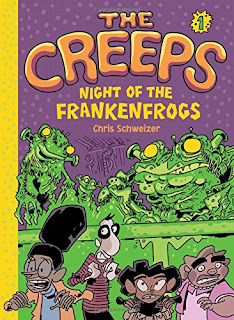 At Pumpkins County Middle School weird things happen every class period, not to mention during lunch, but nobody ever makes a fuss. Principal Garish thinks what's weird and...well...creepy is how fascinating the mysterious goings-on are to Carol, a big-city girl new to Pumpkins County, who finds kindred spirits in Mitchell (monster expert), Mark (military brat with logistics know-how), and Rosario (girly girl on the outside, muscle underneath). The Creeps are on the case to figure out the spooky mysteries and still get to class on time. Last week it was a pudding monster. This week, it's disappearing classmates and a suspiciously coincidental animal-rights petition being passed around by the snootiest girl in class. Could she be behind an amphibian menace? Or could it be the mad genius who lives in the sewers? How about the school janitor? The Creeps will track down the answers!

In a place that's a little bit Gravity Falls and a little bit Goosebumps, the Creeps will have no end of mysteries to dig into while they try to keep their grades up too. Chris Schweizer's fun art is full of the visual puns and clues that graphic novels can do so well.