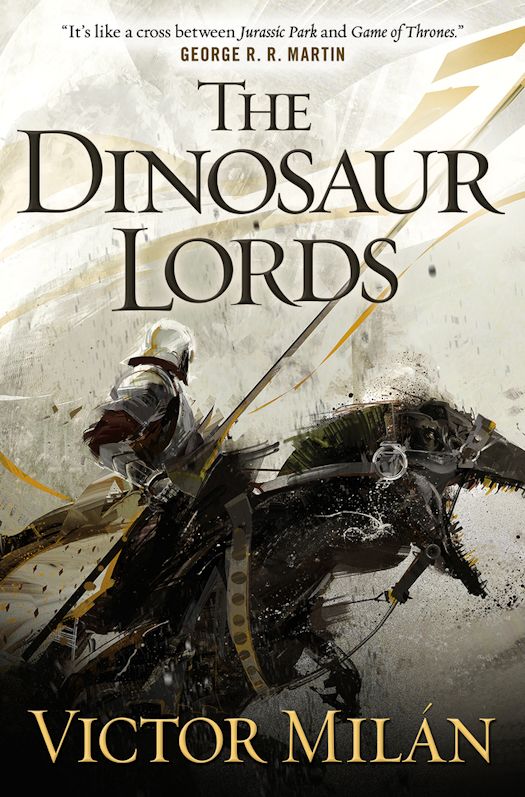 "It's like a cross between Jurassic Park and Game of Thrones." —George R. R. Martin

A world made by the Eight Creators on which to play out their games of passion and power, Paradise is a sprawling, diverse, often brutal place. Men and women live on Paradise as do dogs, cats, ferrets, goats, and horses. But dinosaurs predominate: wildlife, monsters, beasts of burden–and of war. Colossal plant-eaters like Brachiosaurus; terrifying meat-eaters like Allosaurus, and the most feared of all, Tyrannosaurus rex. Giant lizards swim warm seas. Birds (some with teeth) share the sky with flying reptiles that range in size from bat-sized insectivores to majestic and deadly Dragons.

Thus we are plunged into Victor Milán's splendidly weird world of The Dinosaur Lords, a place that for all purposes mirrors 14th century Europe with its dynastic rivalries, religious wars, and byzantine politics…except the weapons of choice are dinosaurs. Where vast armies of dinosaur-mounted knights engage in battle. During the course of one of these epic battles, the enigmatic mercenary Dinosaur Lord Karyl Bogomirsky is defeated through betrayal and left for dead. He wakes, naked, wounded, partially amnesiac–and hunted. And embarks upon a journey that will shake his world.

I was very excited to read The Dinosaur Lords,who wouldn't be, there are knights on dinosaurs. Unfortunately, it didn't take long before my excitement wore off. Sadly, Victor Milán doesn't take advantage of the dinosaurs to the extent I had hoped he would. It also became very apparent the longer I read that this was a gimmick book with very little substance. The writing is very average with very little to make it stand out without the dinosaurs.

Milán's characters are very one dimensional and do everything you expect them to, which leaves no mystery or excitement. I didn't connect to any of the 5 main characters, which is never a good thing when there are so many chances to find some common bond. Out of the five characters, only one of them is female and she is used in the most general way as eye candy for the boys and someone to rape.

With a story filled with battling knights and dinosaurs you would think the pacing would at least be fast, but I kept getting bored as these massive dinosaurs, that are portrayed as being deadly and frightening, were slaughtered so quickly. I also have to say for a book that has the potential to use so many cool dinosaurs, Milán uses the Duckbill dinosaur--I think that would have been one of my last choices.

The world building was muddled and confusing. For some reason Milán felt the need to devote a page at the beginning of the book to tell us his world isn't Earth and never was Earth nor will be Earth. I never would have thought that was the case reading the book, but now that he has the note there it distracted me the entire time reading his book. I tried to see why he would feel the need to call it out. His creation story makes no sense and didn't seem to do anything for the plot of the story, which made me wonder why he felt the need to add it. Milán also seemed to think he needed angels as well, so they pop in and out of the book for no reason.

The Dinosaur Lords is a truly mediocre book. I had hoped for something new and fresh in the fantasy genre, only to find a very cliché story with dinosaurs in it. Sadly, even the dinosaurs weren't used to their full potential. On a positive note, it's not the worst fantasy book I've ever read, so if you go in with low expectations you might enjoy yourself. There is a lot of violence, adult language, and sexual situations, including rape. I would recommend the book only to adults.