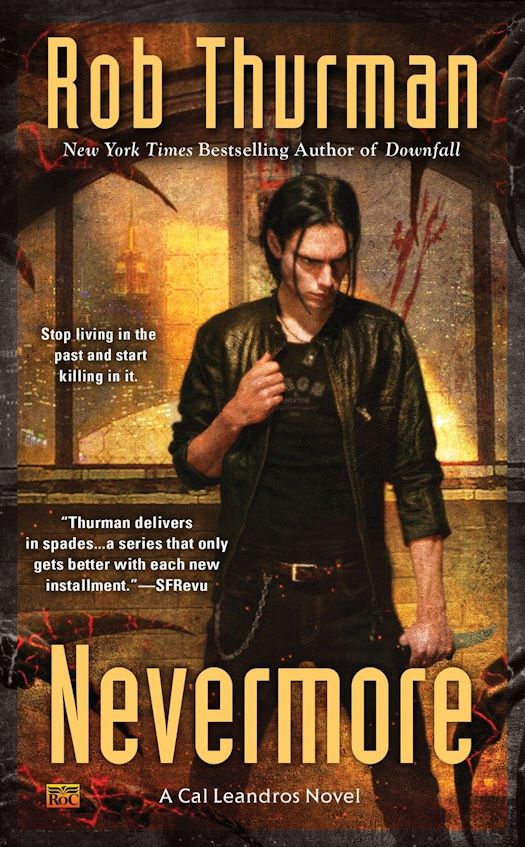 Everyone knows that. I knew it intimately as everyone in my life died thanks to my one seemingly harmless mistake. I’d brought down Heaven, lifted up Hell, and set the world on fire, all due to one slip of the memory.

I forgot the pizzas…

Caliban is a dead man. The Vigil, a group devoted to concealing the paranormal from humanity, has decided Cal has stepped out of the shadows once too often, and death is the only sentence. They plan to send a supernatural assassin into the past to take down the younger, less lethal Cal.

But things change when The Vigil makes one last attempt on Caliban’s life in the present—and end up destroying everyone and everything he cares about.

Now, Cal has to save himself, warn those closest to him, and kill every Vigil bastard who stole his world. But if he fails, he and everyone in his life will be history…

Rob Thurman has rapidly become one of my favorite authors. Nevermore proves this to me even more than her last novel. This series focuses on Caliban and Niko, a pair of brothers who have one foot in this world and one in the supernatural one. Caliban is half human, half Auphe (an old species of monsters who hunted dinosaurs), and he has hidden for most of his adult life. However, from time to time, despite his best efforts, he is forced to use his special abilities, like his gating teleportation, within full view of human beings. Because of that, the Vigil has decided that he must die. The Vigil is an all-human group of warriors whose entire purpose is to keep humans from learning about the supernatural creatures that live among them.

There are few authors who can include time travel or reincarnation effectively in their work; Thurman uses both. Despite Caliban having destroyed the Vigil, the group manages to send their master assassin back into the past to kill Cal and his family. Caliban uses alien technology to transport himself to the past to try to prevent the assassination and destroy the master assassin. In doing so, he contacts Cal (the younger version of himself), Niko, and Goodfellow in an effort to warn them not only about the present problem but also about future ones. However, through his contact, he only entices the heroes into becoming involved themselves instead of avoiding trouble by lying low.

This novel is both darker and more funny than any previous one in the series. In this, Caliban is grieving deeply for his loss in the present and trying desperately not to cling too tightly to those in the past. The interaction, competition, and pure “snark” between Caliban and Cal (the younger) are the highlights of the story. I also appreciate the insight that Caliban brings to his younger self’s actions, explaining from a more mature perspective some of the attitudes and mores that affected him before. I particularly love the various sayings that he writes on the T-shirts that he goes through – unfortunately, none of them are appropriate for sharing!

Once more, this novel can be read separately from the other books in the series, but there is such rich depth to reading them in order. My only gripe with the book was the ending – it came too quickly and abruptly for me to appreciate – quite frankly, it was a cliffhanger, which I despise. Now I am left desperately waiting an entire year for another chapter to come in this saga. Sign me up for more Cal Leandros!