Review: The Bands of Mourning by Brandon Sanderson 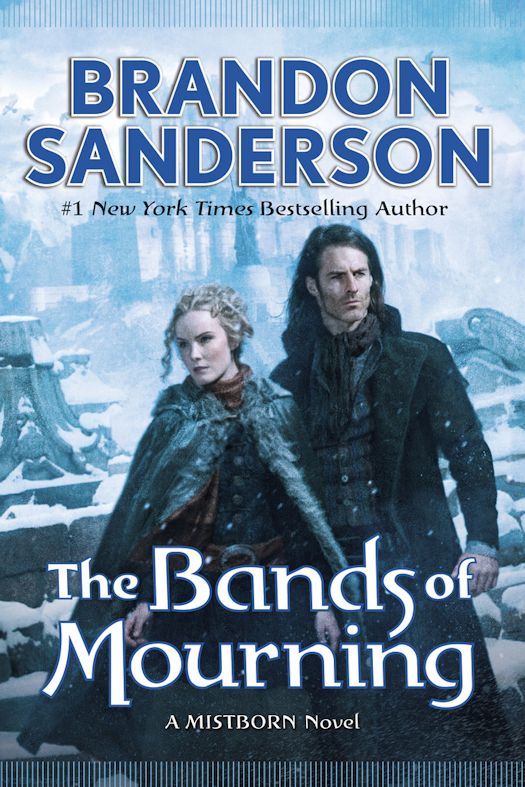 With The Alloy of Law and Shadows of Self, Brandon Sanderson surprised readers with a New York Times bestselling spinoff of his Mistborn books, set after the action of the trilogy, in a period corresponding to late 19th-century America.

Now, with The Bands of Mourning, Sanderson continues the story. The Bands of Mourning are the mythical metalminds owned by the Lord Ruler, said to grant anyone who wears them the powers that the Lord Ruler had at his command. Hardly anyone thinks they really exist. A kandra researcher has returned to Elendel with images that seem to depict the Bands, as well as writings in a language that no one can read. Waxillium Ladrian is recruited to travel south to the city of New Seran to investigate. Along the way he discovers hints that point to the true goals of his uncle Edwarn and the shadowy organization known as The Set.

I have a confession to make - I have never before read a novel written by Brandon Sanderson. After reading The Bands of Mourning I know what I've been missing. I will be reading the prior two adult books in the Mistborn series - The Alloy of Law and Shadows of Self because I have fallen very deeply in like with Sanderson's writing and characters and worldbuilding. Confession over.

Waxillium Ladrian, Wayne and Marasi, along with Steris (Wax's betrothed) and MeLaan (a kandra) are off on a dangerous mission to find the Bands of Mourning, if they exist. This takes them from the comforts of Elendel to New Seran and beyond.

Waxillium (Wax) Ladrian, head of the House Ladrian, Twinborn, and lawman is a marvelous character. He is headstrong, yet understands some of his limits. He is tenacious, courageous, and brave. He can follow a clue with an almost uncanny ability. He's also a decent man, who can learn from others.  He's about to be married to Steris Harms in an arranged marriage that will benefit both of their Houses.

Wax's interplay with Steris is one of the highlights of the novel for me. It reminded me of the interplay between Katherine Hepburn and Spencer Tracy (or Cary Grant) in some of their wonderful films. Steris more than held her own against the larger than life Waxillium and then some. She is quirky and brilliant.

Wayne is altogether a unique character and a wonderful partner for Wax. The two work extremely well together and I'm not sure that Wax could be as successful a lawman without Wayne's help. Wayne has his own quirks that often bring moments of levity to the story. He's also adept at accents which often is useful.

Marasi Colms is a constable and Steris' half-sister. She feels somewhat overshadowed by Wax, which is understandable, but she is a strong and extremely intelligent, and very, very good at what she does.

MeLaan does her part too and fits in with the group. She has skills that are indispensable to the work they are doing and has a very different view of the world.

Being completely unfamiliar with the Mistborn series and its mythos Sanderson provides enough well-placed backstory in The Bands of Mourning that I had absolutely no trouble understanding the history mentioned in the novel, the way things work and who the historical characters are. This is done extremely well and does not bog down the narrative in any way.

In addition to the wonderful characters, the story itself is incredibly engaging. There is sleuthing, action, and unexpected turns as Wax, Wayne, Marasi, MeLaan, and Steris try to figure out where the Bands of Mourning are, if they even exist. The action sequences are often breathtaking. The warmth between the main characters is genuine and heartfelt.

The Bands of Mourning is beautifully written. This is a fabulous novel with great action and pacing, politics, a quest, a very well developed mythology, and thoroughly memorable characters. Highly Recommended!