Review and Giveaway: A Ghoul's Guide to Love and Murder by Victoria Laurie 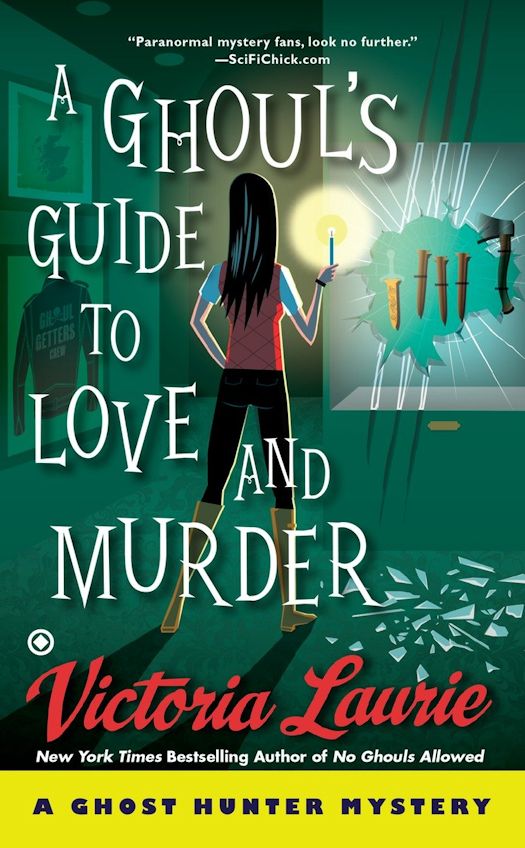 M.J., Heath, and Gilley, are back home in Boston, where their new film is sure to be a monster hit! To promote the film, the studio is sponsoring a special exhibit of supernatural artifacts at a local museum. Unfortunately, Gilley—whose mind is engaged with wedding plans—gets talked into donating to the exhibit the very dagger that keeps the dangerous ghost Oruç and his pet demon locked down in the lower realms. Before M.J. can recover the bewitched blade, there’s a murder and a heist at the museum, and the dagger is stolen.

Now Oruç is coming for M.J. and her crew, and he’s bringing with him some fiendish friends from M.J.’s haunted past. She, Gilley, and Heath are certain to be in for a devil of a time. M.J. may even need to recruit a certain skeptical Boston detective to help stop the paranormal party crashers from turning Gilley’s wedding bells to funeral knells. . . .

A Ghoul’s Guide to Love and Murder is the 10th installment in Victoria Laurie’s Ghost Hunter paranormal mystery series. The series follows M.J. Holliday, a powerful psychic/ghost hunter, and her partners, Heath Whitefeather, M.J.’s dreamy boyfriend and talented psychic, and Gilley Gillespie, M.J.’s flamboyant childhood friend and computer genius. The trio are back in their home base of Boston after wrapping filming of their TV show, Ghoul Getters, which has now been turned into a feature length movie. Gilley has set up a museum exhibit as publicity for the upcoming movie, which includes an artifact from a previous ghost bust that has the potential to wreak havoc and devastation. When the dangerous dagger is stolen from the museum, M.J., Heath, and Gilley must face the demons from their past, quite literally, as they frantically search for the dagger, the horrific demon it houses, and those responsible for unleashing its deadly power.

Mary Jane “M.J.” Holliday is a strong and dynamic character who has developed well over the course of the series. She is compassionate and determined to help people, regardless of their corporeal status. Her recklessness is balanced by her boyfriend Heath and best friend Gilley. Heath is also a very gifted psychic with a deep desire to help others, but that desire is tempered with caution, something that M.J. lacks. Gilley becomes hysterical and unreasonable at the slightest hint of danger, often with comical results. Gilley’s neediness also balances M.J. as she must frequently take a step back to calm her high strung and melodramatic friend.

Powering the mystery are a host of secondary characters, many of which have been previously introduced in the series. Detective Ayden played a key role in the novel that originally featured the dagger and nasty demon that is causing death and destruction again. From the same novel, we also again meet Bernard, Angelica, and Rich, all rival psychics who may or may not have deep seated grudges against M.J. and her crew. Characters that also play a role in the mystery are Phil Sullivan, the director of the museum where the dagger was being displayed; Murdock, the bullish security guard at the same facility; and Chris Olivera, a strikingly beautiful, confident, and intelligent detective who is skeptical of M.J.’s psychic powers, but is willing to do whatever it takes to stop the carnage that follows the dagger. Additionally, we get to experience baddies from past novels, most notably Hatchet Jack and the Grim Widow, powerful demons who nearly killed M.J. and her crew before they could beat them down and banish them, seemingly permanently, to the lower realms.

The author writes a fabulous mystery that weaves in personal aspects of the main character’s lives flawlessly. She also blends characters from her other paranormal mystery series, the Psychic Eye Mysteries. Specifically featured in this book are Abby Cooper, the main character in the Psychic Eye series, who delivers some unexpected news to M.J., and Abby’s sister, Catherine Cooper-Masters, a high brow executive who has agreed to help Gilley plan his wedding to Michel, Gilley’s handsome French/Scottish boyfriend.

A Ghoul’s Guide to Love and Murder is extremely fast paced and action packed, as are all the installments to date, with even the slower parts delivering surprises and fun. This novel is an excellent addition to a long running and complex series that continues to excite the reader and bring them new and interesting plotlines and paranormal intrigue.

What:  One entrant will win a Mass Market Paperback copy of A Ghoul's Guide to Love and Murder by Victoria Laurie from the publisher. US ONLY

Who and When:  The contest is open to all humans on the planet earth with a US mailing address. Contest ends at 11:59PM US Eastern Time on January 30, 2016. Void where prohibited by law. No purchase necessary. You must be 18 years old or older to enter