Interview with Emily Foster, author of The Drowning Eyes


Please welcome Emily Foster to The Qwillery. The Drowning Eyes is published today by Tor.com.  Please join The Qwillery in wishing Emily a Happy Publication Day! 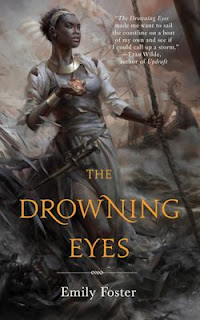 Emily:  Thank you so much for having me! It's good to chat with you. I started writing when I was very young, but the first thing I remember really working on was a sprawling Harry Potter Mary-Sue fanfic composed in 24 point fourth-grade handwriting. I'm kind of a compulsive storyteller, and once I started doing original fiction in high school I found that I didn't really want to do anything else.

Emily:  Definitely a hybrid. The problem with plotting is that a story always changes some aspect of anything you plot. With some elements, like a character's personality and understanding of the world, that change is a good thing. You don't see writers going back and changing a character's motivations at the beginning of the story so they match the motivation at the end, so plotting with a character's backstory or personality isn't going to translate into wasted time later when I'm editing.

When I'm doing something like designing a system of magic or engineering a killer robot, though, I think pantsing is much more rewarding. One of your big challenges as an SFF writer is coming up with a scientific or magical element that saves your characters out of nowhere—and then turning around and making that convenient, tidy deus ex machina into a huge pain in the butt that's been plaguing them the whole story. Plotting ahead of time doesn't really help here. You do sometimes have to write down some really stupid things and come back later to make them line up with the better idea you'll have 750 words later.

Emily:  Actually writing about my characters go out and doing things is bizarrely difficult for me. I have these visions in my head of epic battles and thrilling chase scenes and what have you, but when I sit down to write, something in my head says, “No. Everyone is very sad and very tired, and they are going to sit in a menacing dive bar and smoke cigarettes and talk in sexy voices about things that happened offscreen three chapters ago.” Action is laborious. Any time my characters shut up for more than five lines at a time, you know I was agonizing over that scene.

Emily:  Diana Wynne-Jones and K.A. Applegate were my absolute favorite writers when I was a youngster, and they've definitely been lifelong influences on my writing. Then, of course, I got into Connie Willis's work when I was at UNC up in Greeley, and I have always treasured the advice she'd give when she'd come talk to our classes.

My current favorites would have to be Junot Diaz and Kameron Hurley. I am a sucker for vivid characters who you can get a good look at from all angles, and I can lose myself for hours and hours in their worlds very contentedly. They will also both make you smarter, which is always a bonus.

TQ:  Describe The Drowning Eyes in 140 characters or less.

Emily:  A fisherwoman learns that neither weather control nor your natural eyeballs are all they're cracked out to be.

TQ:  Tell us something about The Drowning Eyes that is not found in the book description.

Emily:  This is, in a lot of ways, a story about the ways in which we choose our families, especially when disability eclipses the option of an independent lifestyle. Both Tazir and Shina are faced with the loss of one family and the search for another, and the looming threat of disability informs their family-finding in different ways for each woman.

TQ:  What inspired you to write The Drowning Eyes? What appeals to you about writing Fantasy?

Emily:  The first ideas for The Drowning Eyes occurred to me driving through South Park, which is a real place! It's a very long, very empty drive from one little town to another up there, and my tape deck broke so it's the public radio out of Colorado Springs or nothing. One day I'm up there to go help stack hay, and it's apparently sea chanty day, so I'm kind of laughing at this picture I get of me and my buddies in our flannel and our cowboy hats peering off the starboard bow of a flatbed. It was a silly image, but by the time I got back home I had this whole little island universe I'd cooked up, and I was determined to set something there.

And I think a lot of fantasy, for me, starts with daydreaming on long road trips or while cleaning the house or whatever. That's what the best fantasy is to me, is an imaginary upgrade on a real story, and when it's done right it lets you feel like you relate to this pirate captain or that space assassin or maybe a passive-aggressive glow cloud raining carcasses on a small town. It's not an escape so much as it is a different perspective on real life.

TQ:  What sort of research did you do for The Drowning Eyes?

Emily:  I have done a lot of boat research in my time for various projects (which, ok, were novel-length pieces of fanfiction) so most of the research on this project was the specifications of a dhow and the vagaries of how to navigate one. I have to confess that I have never been on a boat for more than one day, and I just have to imagine it's like living with several other people in a high-maintenance RV for an extended period. There was some meteorology research as well—and if I wind up writing more in this setting, I think that's going to be a really fun field to get acquainted with.

Emily:  Tazir was, by a long shot, the easiest character to write. She's funny and obnoxious, and I don't have to think too hard when I'm writing from her perspective. Shina was actually very difficult to write. I can't put my finger exactly on why—maybe it's that she's supposed to be a little awkward in speech and manner, where usually I try to go for less awkward and more fluid in speech and movement.

TQ:  Which question about The Drowning Eyes do you wish someone would ask? Ask it and answer it!

Emily:  You know, I always find myself asking what exactly made me choose a nautical setting. I've always loved high-seas adventures, and I think it's because you have to carry so much of the story on your characterization and your depictions of the relationships that hold these tiny communities together in such hostile conditions. I think it's a setting that lets me play up my strengths as a writer. Plus, I mean, I see an ocean once every three years tops, so the novelty is definitely nice!

TQ:  Give us one or two of your favorite non-spoilery lines from The Drowning Eyes.


“Shut up,” Tazir said. “She's explaining her quest.”
Kodin grunted and shifted again. “I wanna be on a quest,” he said, sitting up. “Can I be on the quest?”
“Of course you're on the fucking quest,” Tazir said. “You're the only one on this ship who can read.”

Emily:  Right now, I'm finishing up a longer project, but here in a couple weeks I'm going to switch gears and start on this story about a girl who can eat literally anything and finds work cleaning up industrial disasters. I'm not sure exactly how my next project is going to go, but I think I'd definitely like to work more with the novella form and get more familiar with it.

Emily:  Any time! Thanks for the questions. 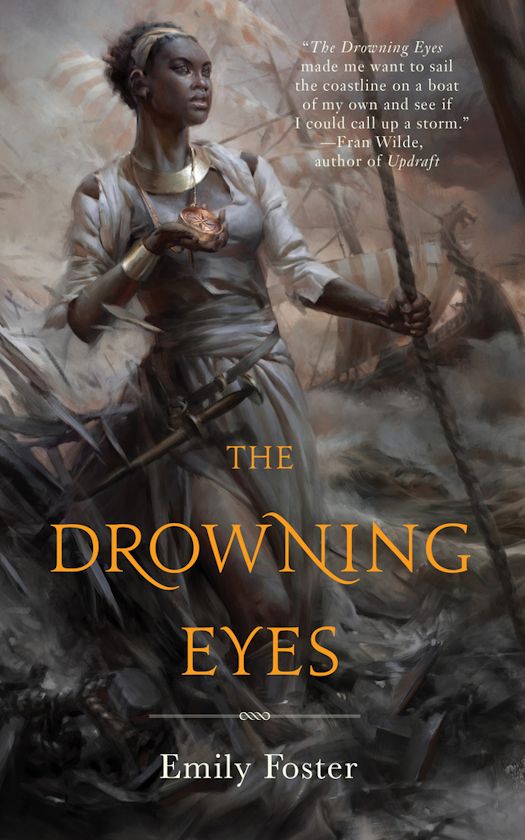 When the Dragon Ships began to tear through the trade lanes and ravage coastal towns, the hopes of the archipelago turned to the Windspeakers on Tash. The solemn weather-shapers with their eyes of stone can steal the breeze from raiders' sails and save the islands from their wrath. But the Windspeakers' magic has been stolen, and only their young apprentice Shina can bring their power back and save her people.

Tazir has seen more than her share of storms and pirates in her many years as captain, and she's not much interested in getting involved in the affairs of Windspeakers and Dragon Ships. Shina's caught her eye, but that might not be enough to convince the grizzled sailor to risk her ship, her crew, and her neck.

Emily Foster graduated from the University of Northern Colorado in 2012 with a bachelor's degree in English. She has written and published a variety of work ranging from abstract poetry to Supreme Court briefs. However, her real passion is for fantasy fiction inspired by the unforgiving landscapes of her home in rural Colorado and the rugged people who live there. She is concerned that if she lists any pets or family members in her biography, it will somehow cause more of them to appear in her home.