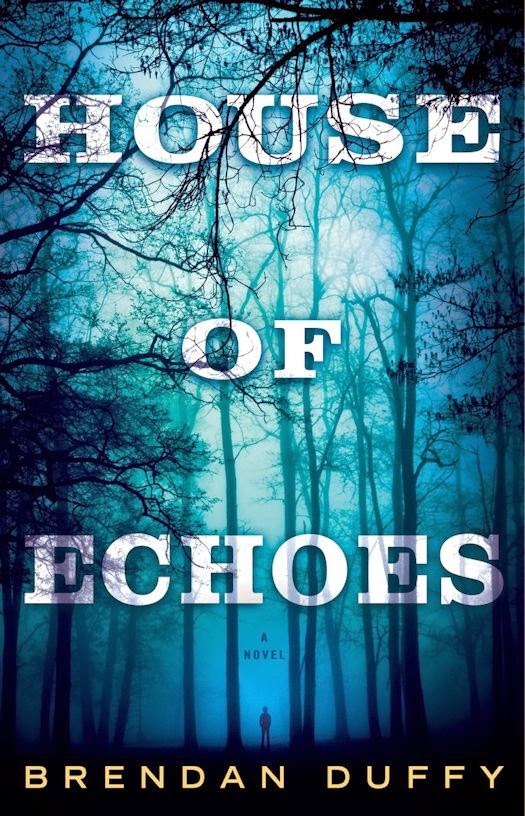 In this enthralling and atmospheric thriller, one young family’s dream of a better life is about to become a nightmare.

Ben and Caroline Tierney and their two young boys are hoping to start over. Ben has hit a dead end with his new novel, Caroline has lost her banking job, and eight-year-old Charlie is being bullied at his Manhattan school.

When Ben inherits land in the village of Swannhaven, in a remote corner of upstate New York, the Tierneys believe it’s just the break they need, and they leave behind all they know to restore a sprawling estate. But as Ben uncovers Swannhaven’s chilling secrets and Charlie ventures deeper into the surrounding forest, strange things begin to happen. The Tierneys realize that their new home isn’t the fresh start they needed . . . and that the village’s haunting saga is far from over.

House of Echoes is a novel that shows how sometimes the ties that bind us are the only things that can keep us whole.

In Brendan Duffy’s gothic-style mystery novel, House of Echoes, The Drop is a plateau set between two mountains near the Adirondacks in upstate New York. It is a unique setting for the storied home, The Crofts. Dating back to the early 1700s, The Crofts is an imposing four story estate whose blank windows have seen much suffering in the fields and forests in her sight.

The village of Swannhaven is a close-knit community run by families who have lived in the shadow of the mountains back to the Revolutionary War. Times have been tough for this remote village. They've experienced recurring cattle death, great fires, punishing weather, starvation, poisoned water, and farming families hit hard by the economy. But the long surviving “Winter Families” take care of their own. Newcomers Ben and Caroline Tierney are determined to turn The Crofts into a fabulous inn and perhaps spark a reversal of fortune for all. Ben’s lineage goes back to one of Swannhaven’s founding families, so he and Caroline and their young sons Charlie and Bub are welcomed into the fold, enthusiastically by some and, in proper Yankee tradition, more grudgingly by others.

Told in multiple points of view, we see the Tierney’s troubled marriage, the process of renovations on The Crofts, and the cast of villagers through the eyes of Ben, Caroline and eight year old Charlie. It is Ben’s thoughts that we are most often privy to, but Charlie’s curious and secret adventures underscore that something is most assuredly not right in their isolated woodland.

A layer of history is added by way of letters written by a former resident mostly in 1777, relating a grim and despairing companion tale in tandem with the primary story. The scattered clues slowly reveal a picture of looming crisis – “can you see it?” The experiences and impressions that the main characters don't share with each other create a level of tension for the all-knowing reader as the story does a slow burn toward a fevered but somewhat predictable end.

Novels about foreboding, ancient homes are plentiful, and it's always interesting to see what role the house itself will play. The Crofts is a character in the story, without a doubt, but in a different way from the most common house-as-antagonist tales.

The main characters are mostly interesting and likable, and the shifting points of view are used strategically throughout the story. There are a few forays into lesser characters’ heads that were jarring to me, even though those choices were made with valid reason. There are also minimal jumps from the third person to the first person and then to the second person in the final chapters. I see the value of these switches, but they did disturb my immersion in the story’s conclusion.

Duffy’s sleight of hand kept most of the truth out of sight until the end, so there were some surprises. There was one entirely out of character decision that brought to mind the horror trope “Too Dumb to Live.” Since these bad decisions typically serve up extended conflict I can give it a pass, especially in this genre.

House of Echoes, Duffy’s debut novel, is fast-paced and quirky enough to make it a quick read. There is a fair amount of gore, so if you're sensitive to that, be warned. If you enjoy gothic horror, mysteries, and thrillers, House of Echoes is worth your time. I'd recommend a night or two at the historical Crofts, but don't overstay. History has a way of consuming the unprepared.