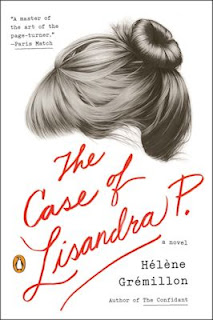 Hello Hélène! You are an internationally acclaimed author whose first novel is The Confidant. For American readers who are just getting to know you, what draws you to the thriller genre? What inspires you as a writer?

In writing, I’m above all interested in suspense and psychological qualities. How do human beings feel ? How do human beings react ? Love, hate… Their qualities, their flaws, and how much all of that is subjective. The Confidant was already based on that pattern. Jealousy was the main feeling I want to develop in The Case of Lisandra P. It carries in its wake cruelty, destructive paranoia, and sorrow for the victim but also in the person who feels jealousy. Jealousy is infernal in nature. In comparison with The Confidant, The Case of Lisandra P. is more in line with the thriller genre: Indeed there’s a corpse! A shrink’s wife is found dead, the shrink is accused of murder, and one of his patients try to prove he is innocent, looking for the real murderer among his others patients. That is the pitch, the impulse which has driven my writing.

The Case of Lisandra P., your current novel, is set in Buenos Aires, Argentina in 1987 and the book notes it is based on a true story. How did you get the idea for this book? Did you visit Buenos Aires during your research?

The Case of Lisandra P. begins with “the book is based on a true story” but it’s a kind of a “lie”… The book is not based on a true story, but this sentence won me, I was sure it was the best one to start the novel, the best tone. To put me at ease with my “lie”, my publisher told me “Hélène, the fiction can begin where the author wants…” In a way I agree and I kept it! But no mistake, I didn’t want to mislead my readers, it’s more mysterious. When I’m writing, I hesitate, I doubt, then when something sounds obvious to me I can’t deny it. Nevertheless everything I wrote about the historical context is perfectly true, in each detail, and also the case of Miguel, one of the shrink’s patients.
At the beginning, of course, I had planned to make a trip in Argentine but the more I went on my writing, the more my ideas were definite and bright, the less I wanted to go to Buenos Aires. I was afraid to mix up everything in my mind. I just needed to stay and concentrate behind my writing desk. Then I didn’t go.

Your characters are living in the aftermath of a brutal dictatorship. Their psychological scars run deep. How did you begin to imagine these individuals?

I never went to Argentina but I did read a lot of books about the dictatorship, and I saw a lot of films. Then I invented my characters with this stuff, the real events help me to imagine a lot of situations. With my characters, the first thing I imagined was to put in the novel three plain psychoanalytic sessions, only dialogues, like three drama shows in the heart of the novel.

Your book opens with the untimely death of a beautiful young woman and goes on to explore her marriage to a psychoanalyst. What attracted you to the idea of writing about a marriage after one of the pair dies mysteriously?

My book explores Lisandra’s marriage after she died mysteriously. Love is one of my deep obsessions, this passionate feeling, alienating one, so different for everybody. It is my main source of inspiration. Jubilant and painful.

What do you like to read? Who are some of your favorite mystery/thriller authors?

I love mystery authors, they are my favorite to read. I love classics like Georges Simenon, a prolific French author, Maurice Leblanc, Sir Arthur Conan Doyle, Agatha Christie, I remember even how much I loved the children’s books Alfred Hitchcock wrote, gorgeous. And I have recently read two books I found really good, Before I Go to Sleep by S.J. Watson and The Ice Twins by S.K. Treymane. I had to stop this last one in the night because I was so afraid I had to wait for the sunrise to go on reading… The proof the thriller won! A gripping psychological thriller for fans of The Girl on the Train and The Silent Wife about a wife’s secrets, a husband accused of murder, and a marriage gone terribly wrong

Buenos Aires, 1987. When a beautiful young woman named Lisandra is found dead at the foot of a six-story building, her husband, a psychoanalyst, is immediately arrested for her murder. Convinced of Vittorio’s innocence, one of his patients, Eva Maria, is drawn into the investigation seemingly by chance. As she combs through secret recordings of Vittorio’s therapy sessions in search of the killer—could it be the powerful government figure? the jealous woman? the musician who’s lost his reason to live?—Eva Maria must confront her most painful memories, and some of the darkest moments in Argentinian history.

In breathless prose that captures the desperate spinning of a frantic mind, Hélène Grémillon blurs the lines of past and present, personal and political, reality and paranoia in this daring and compulsively readable novel.


About the Author
Hélène Grémillon was born in France in 1977. After obtaining degrees in literature and history, she worked as a journalist at the French newspaper Le Figaro before becoming a full-time writer. Her first novel, The Confidant, was awarded Monaco’s Prince Pierre Literary Prize. She lives in Paris with her partner, singer and songwriter Julien Clerc, and their child.


About the Translator
Alison Anderson is an American writer and translator based in Switzerland. Her translations include J. M. G. Le Clézio’s Onitsha, Muriel Barbery’s The Elegance of the Hedgehog, and Hélène Grémillon’s first novel, The Confidant.