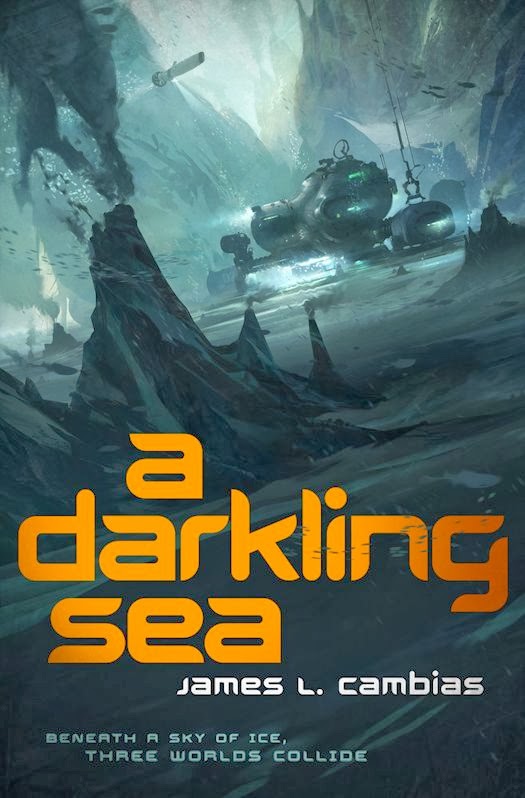 I was drawn to this book initially because it reminded me of one of my favorite movies Abyss. Instead of surly oil workers, A Darkling Sea has scientists interacting with aliens on the sea floor. James L. Cambias creates a dynamic plot that kept me reading late into the night.

Cambias' world is in our future when Earth begins to truly explore space and the many different planets and moons. During our exploration, we meet a peaceful alien race named the Sholen who resemble six-legged otters. The Sholen fear humans because we remind them of their war-ridden past. They try to control human exploration when a group of humans sets up an underwater base to study the alien race of Ilmatarians who resemble lobsters. The Sholen try to control the contact between the humans and Ilmatarians. I enjoyed the fact that both alien races are very different in their development, even though they both have connections to water-based animals.

Cambias shares the POVs of several different characters for each race that helps to establish their races while also allowing for character development. My only complaint about the aliens was the fact that they were basically lobsters and otters. I like my aliens weirder. I will say I was very happy with their unique cultures though.

Where the book truly shines is the pacing. It helps that Cambias has several different POV characters who keep the story fresh and exciting. It also helps that he's not afraid of action. One of my pet peeves with science fiction is it can be a little dry with very little going on. Thankfully, Cambias doesn't have this problem. He doesn't waste a lot of time before we get a lot of interesting conflicts and battles.

A Darkling Sea is a science fiction political action tale. Besides the animalistic qualities to the aliens, I had a blast reading it. It was also nice to read a stand alone novel. There is violence, language and sexual situations involving otter aliens. I would recommend it to older teens and adults.
Posted by Qwill at 9:19 AM