Excerpt: The Good, the Bad, and the Vampire by Sara Humphreys


Happy Publication Day to Sara Humphreys for The Good, the Bad, and the Vampire out today from Sourcebooks Casablanca. 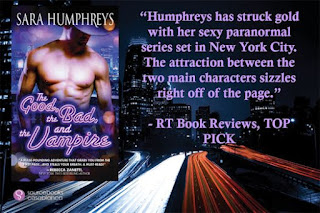 The Good, the Bad, and the Vampire
Dead in the City 4
Sourcebooks Casablanca, January 5, 2016
Mass Market Paperback and eBook, 320 pages 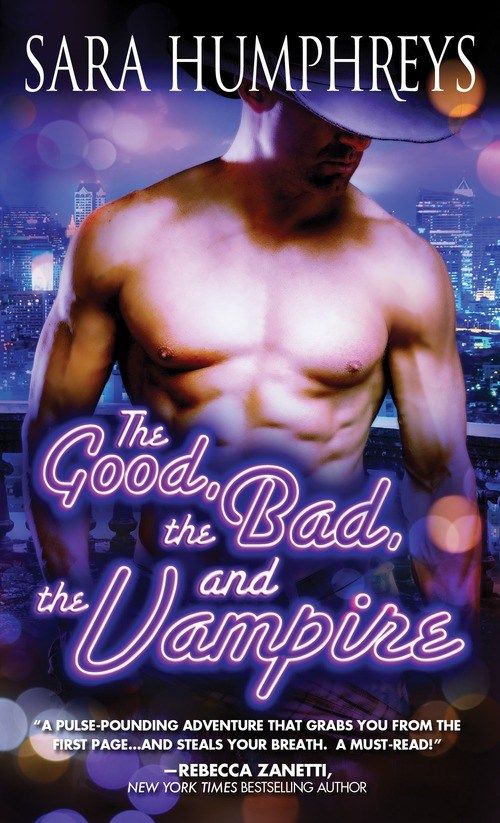 Book 4 of the Dead in the City series

He wants eternity?
Dakota Shelton is a vampire cowboy with a penchant for cinnamon lollipops and Johnny Cash. Though highly skilled and deadly dangerous to his enemies, he’s still a Texas good ol’ boy at heart. And he has that heart set on wooing Trixie LaRoux—the most badass punk rock chick in town—the old-fashioned way.

Over her undead body...
Trixie is tough as nails and sharp as a silver stake—the last thing she wants is a man to sit on a porch and not grow old with. So it’ll take going to hell and back fighting a new threat to vampires before she admits Dakota’s courtship makes her blood hum. Turns out chivalry’s not dead after all.

Trixie couldn’t remember the last time she went to a little girl’s birthday party but it certainly wasn’t since becoming a vampire.

Olivia and Doug might have been two of the world’s most powerful vampires, but they had also become the first vampire parents in recorded history. Today was their daughter Emily’s second birthday and they were throwing her a big old party, complete with birthday cake and balloons.

Trixie had gone back and forth all day long about whether or not to attend.

Being around little Emily was bittersweet on a regular day and the birthday celebration would only heighten Trixie’s struggle. But choosing not to go would have been selfish. Trixie’s personal drama wasn’t Emily’s fault, and she didn’t want to disappoint the adorable little redheaded cherub. Not only that, Emily was Olivia’s daughter and since Olivia was Trixie’s maker, that made her family.

Not showing up would have been rotten.

Olivia would have understood if Trixie bailed out; she knew her better than anyone else. But Olivia’s Bloodmate, Doug, wouldn’t understand her absence from such a celebrated event. Neither would the other members of the coven.

Nope. Trixie decided to do what she always did. She’d put on a smile, make a wise-ass comment or two, and act like nothing and nobody bothered her.

A familiar voice pulled her from her thoughts as she strode down the stone hallways of the Presidium’s underground facility, buried deep beneath Fort Tryon Park and The Cloisters in New York City, “Well, smack my ass and call me Sally.”

The deep southern drawl echoed around her, stopping Trixie dead in her tracks. A shiver of lust whispered beneath her skin as it usually did whenever he was nearby, but she swiftly shoved it aside.

“Okay, Sally.” Trixie rolled her shoulder and fought the buzz of attraction. “But you can smack your own ass.”

“What’s the matter, darlin’?” The rumbling baritone of his voice soaked with that southern twang, drifted over her shoulder but she didn’t spare him a glance. Trixie continued toward Olivia and Doug’s apartment door, forcing herself to put one foot in front of the other. “Don’t I even get a hello?”

“Hello, Dakota,” she said, with a roll of her eyes.

Coming to this little gathering for Emily was difficult enough and his arrival only ratcheted her anxiety up a notch. Damn it. Why wasn’t he out on patrol? Over the past few months, the cocky and admittedly gorgeous sentry, had become more and more present in her little corner of the universe.

Trixie fiddled with the box in her hands, the one she’d wrapped carefully with the pink and white skull and crossbones paper. She didn’t even bother to put a card with it. Everyone would know who’d brought it. She was the only coven member with bright pink hair and a penchant for skulls and crossbones, after all.

“That your present for little Emily?” He asked. “You wrapped it real nice.”

He got closer by the second.

“No,” Trixie snorted. “I just like carrying around a gift wrapped box for the hell of it. You know, for shits and giggles.”

She was being a snot but she couldn’t help herself.

Trixie kept her gaze pinned to the mammoth mahogany door at the end of the hallway and tried not to notice that he’d sidled up next to her, his stride matching hers.

Dakota Shelton, the newest sentry for the Presidium, the vampire government, was not an easy man to ignore.

His six foot two inch broad shouldered frame towered over her easily but there was something else about him that set her on edge. It was the way he carried himself. He moved effortlessly and casually, as if he was just the good-old boy from Texas he claimed to be. 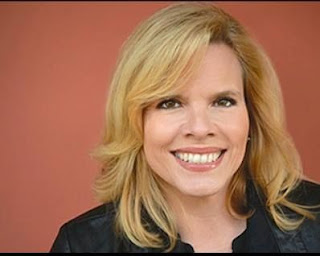 Sara Humphreys is the award-winning author of the Amoveo Legend series. The third book in the series, UNTAMED, won two PRISM awards--Dark Paranormal and Best of the Best. The first two novels from her Dead in the City series have been nominated for the National Readers Choice Award. Sara was also a professional actress. Some of her television credits include, A&E Biography, Guiding Light, Another World, As the World Turns and Rescue Me.

She loves writing hot heroes and heroines with moxie but above all, Sara adores a satisfying happily-ever-after. She lives in New York with Mr. H., their four amazing sons, and two adorable pups. When she's not writing or hanging out with the men in her life, she can be found working out with Shaun T in her living room or chatting with readers on Facebook.

Previously in Dead in the City 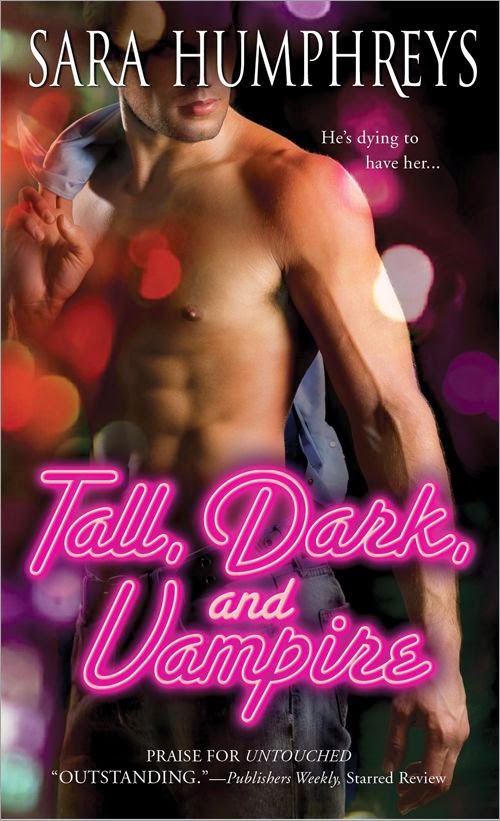 Book 1 of Dead in the City

She always knew Fate was cruel...

The last person Olivia expected to turn up at her club was her one true love. It would normally be great to see him, except he's been dead for centuries. Olivia really thought she had moved on with her immortal life, but as soon as she sees Doug Paxton, she knows she'd rather die than lose him again. And that's a real problem...

But this is beyond the pale...

Doug is a no-nonsense cop by day, but his nights are tormented by dreams of a gorgeous redhead who's so much a part of him, she seems to be in his blood. When he meets Olivia face-to-face, long-buried memories begin to surface. She might be the answer to his prayers...or she might be the dead of him. 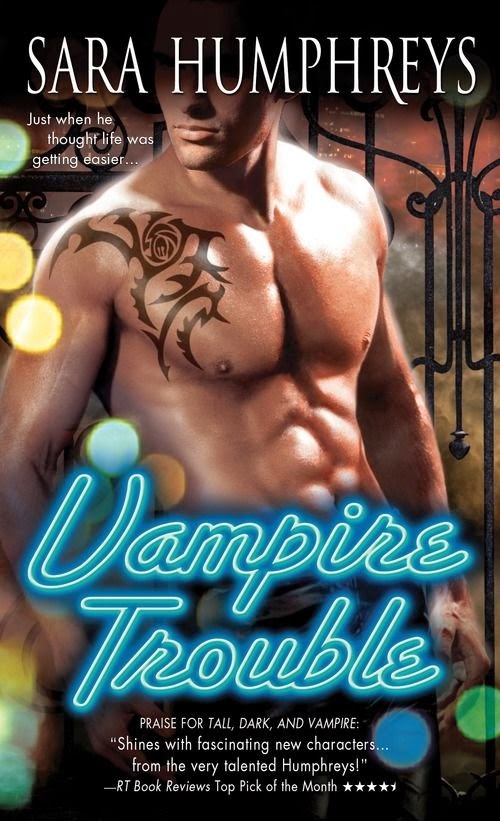 Shane Quesada, a four-century-old vampire sentry, is known for his cold, unemotional precision, but once Maya begins to invade his dreams, his world is changed forever. His job to protect her is swiftly replaced by the all-consuming need to claim her as his own. 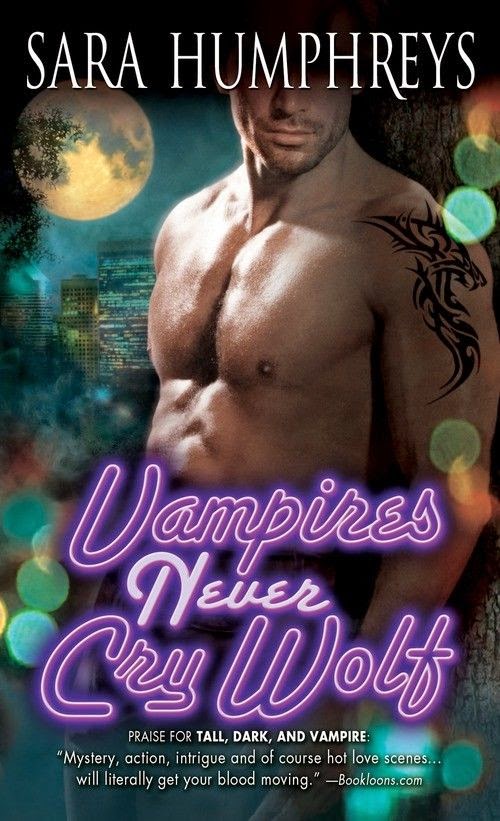 Labels: and The Vampire, Dead in the City, excerpt, Sara Humphreys, The Bad, The Good
Email ThisBlogThis!Share to TwitterShare to FacebookShare to Pinterest