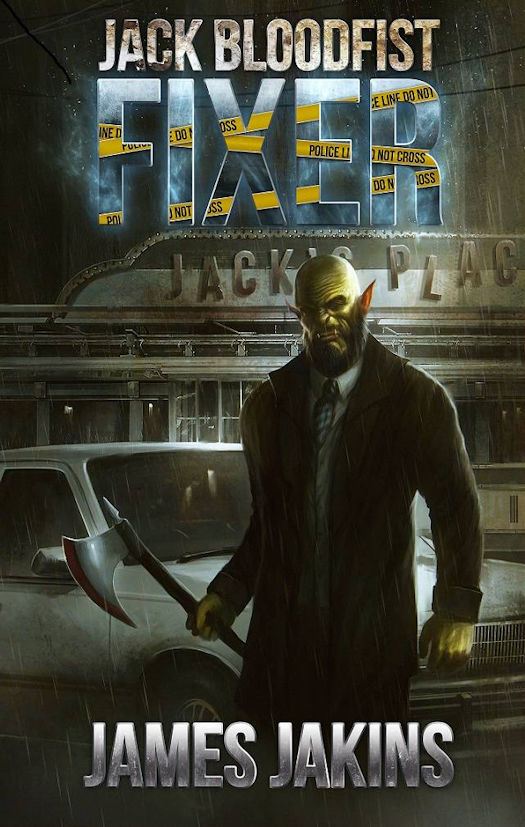 When the orcs and goblins of Summervale, Virginia need something done they call Jack.

He's the one who convinces the local PD to ignore any tribal violence. The guy who makes sure the goblins aren't evicted whenever they do something decidedly goblin.

He also does the little things that no one else is willing to do. Like handing keys over whenever a prodigal son returns, or identifying the body of said prodigal.

Then there's the occasional murderous paladin and his vengeful god to deal with.

All in a day's work.

Jack Bloodfist is an orc; well, really a half-orc, half-goblin with a large tribe/family for whom he is responsible. He acts as a fixer – negotiating and coordinating deals and problems among his tribe/family and between them and the humans. His people had been led to this world by the wizard Jackson Smith, either as a reward or as a refuge after having assisted Jackson in some adventure, and they have lived quietly among the humans without much fanfare and with few humans even knowing about their existence.

Unfortunately, history has come back to haunt them in the form of Arthur Shield, another wizard and a paladin for the god, Saban. Arthur is prepared to destroy Jack’s family for a grievous offense against Saban. He begins a murderous spree, and Jack is drawn into the search for him. Like the reader, Jack learns about the backstory of his family and the reason for the offense during this hunt.

Jakins has done a good job of establishing a distinct voice in his main character, Jack. As a first-person speaker, his voice is characteristic of a relatively mellow individual who starts out in-over-his-head and then rises to the occasion. Most of his secondary characters are well-rounded as well, using action and the story itself to flesh out those such as the detective, Denelle Halldorson, and the love interest, Mogayne.

My only criticism involves the framing of the story. The first three chapters switch from first person to third person and finally back to first person. Jakins uses third person again whenever he discusses Arthur or Jackson. This would not normally be a problem, but the third person chapters read so very differently from the first-person ones. The chapters involving Arthur seem necessary to explain how the character gets from point A to point B. But the chapters involving Jackson almost read like a separate story altogether, and there is very little that ties them to the main story other than the character and the fact that he is a wizard. The story would have been stronger and tighter, had Jakins found a way to include those characters more naturally into the novel. I give Jack Bloodfist: Fixer a 7/10.
Posted by Qwill at 8:00 AM