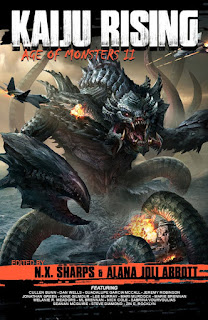 When Nick Sharps and Alana Joli Abbott invited me to write a story for their new anthology, Kaiju Rising: Age of Monsters II, I was pretty ecstatic. I love a good monster story, and I have several ideas I’d like to some day write about. I pretty much immediately accepted, and off I went, on an adventure with some unlikely heroes to kill some monsters.

My story is one that kept surprising me with every draft. What started out as a simple action monster story grew to have a depth I didn’t expect. Yes, it was action-adventure, but as I got to know my characters, and spent more time with them even within the seven thousand word confines of their story, all these little connections started happening. Little motivations for their actions. Or vice versa—they would do something, and then I would say, “Oh, they are doing that because___,” and I’d discover something new about that character.

For example, I had my character, a half-orc, in draft one, traveling to a town where she took a job hunting a monster. OK, that was fine. And it would have been perfectly fine. In fantasy stories, that happens all the time. But then as I wrote, I said, “OK, maybe she has this job because it’s personal. Maybe this monster messed with her home city.” “All right,” another side of me said, “But how can we make it WORSE? How can the stakes be raised?” In the next draft, the stakes got higher. Then, as I learned more about the character as she interacted with other characters, I said, “Oh, here is a new way to make her experiences shape her situation even more…” and “What if her own MOTHER [redacted for spoilers]??”

After doing this with the main character, the secondary character started coming into more focus as well. If the main character’s mother did this thing, then this other character would do ___. Wait…What if that character actually was the hero of the story? As one thing developed, another thing would, like a chain reaction. And one of the hardest things for me to do while writing is to not fight this process. I often feel the need to rush. I have some author friends who seem to write four books a year. Could I do that? Sure. Should I do that? Well, I don’t know, but I do know that when I let a story grow as it needs to, that story turns out to be so much better and deeper than it would have otherwise.

Part of a writer’s job is to make the reader’s experience seamless and effortless. Readers aren’t supposed to see the machine behind the works, they aren’t meant to see all the blood, sweat, and tears that go into a story. They are supposed to just get swept up into the story, live life through their characters’ eyes, and have adventures, fall in love, or do whatever it is the story’s purpose is—mostly, they should be entertained. Sometimes, as a writer who is also a reader, it’s easy to forget that stories have layers. With each draft, something new comes out, some new aspect of a character, or of the backstory, of the world. This is why, at least for me, when I’m in the middle of my first draft, with every story, I think to myself, “My glob, I have forgotten how to write!” No, I haven’t forgotten how to write exactly. I’ve just forgotten that the way I write, I have to start with a core, and work out, fleshing out the details as I go. Draft one is often terrible, but then draft two gets better. Draft three is where things start getting really interesting, and then when I hit draft four, I’ve got the story as it should be, usually, and will just need some proofreading. It takes time for things to process. But sometimes, the best stories are the hardest to write. 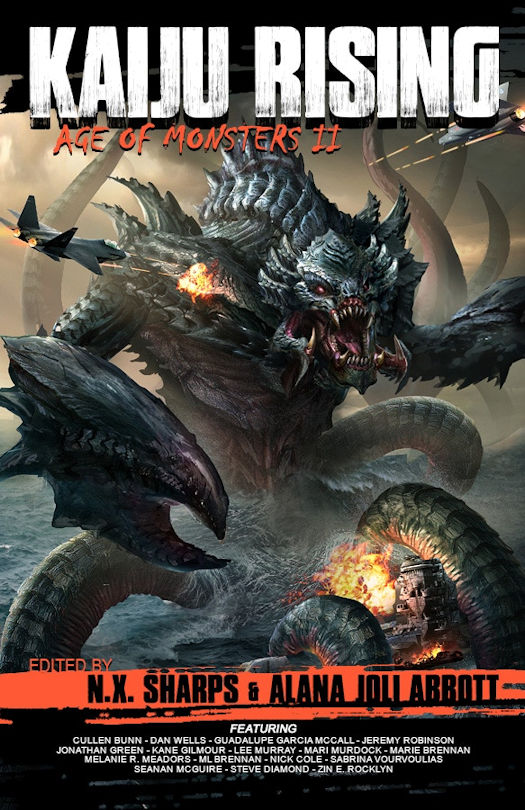 A few years ago, Kaiju Rising: Age of Monsters smashed onto the book scene, collecting stories from some of the best writers of monsters in the business. Now, the age of monsters continues on with the follow up anthology, Kaiju Rising II, featuring stories from authors like Seanan McGuire, Jeremy Robinson, Marie Brennan, Dan Wells, ML Brennan, Jonathan Green, Lee Murray, Cullen Bunn, and more! If you love movies like Pacific Rim, Godzilla, and Kong, you won't want to miss it. Support this anthology from Outland Publications on Kickstarter now, keywords Kaiju Rising. 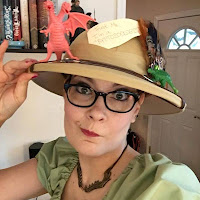 Melanie R. Meadors is the author of fantasy stories where heroes don't always carry swords and knights in shining armor often lose to nerds who study their weaknesses. She’s been known to befriend wandering garden gnomes, do battle with metal-eating squirrels, and has been called a superhero on more than one occasion. Her fiction has appeared in Circle Magazine, Prick of the Spindle, and in the anthology Champions of Aetaltis. She studied astronomy and physics at Northern Arizona University and has published some non-fiction in the field of astronomy and library sciences. She's the co-editor of the anthology MECH: Age of Steel and editor of Hath No Fury, and she is a blogger and general b*tch monkey at The Once and Future Podcast.
Posted by Qwill at 6:33 AM