Please welcome David Pedreira to The Qwillery as part of the 2018 Debut Author Challenge Interviews. Gunpowder Moon was published on February 13th by Harper Voyager. 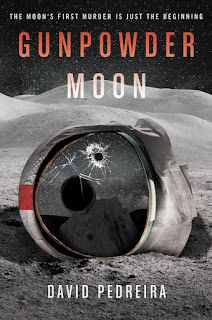 David:  According to my mom, I wrote (and told) some tall tales when I was in the first or second grade, but I don’t remember them. My first complete short story was for a fiction writing class in college. It was a Hemingwayesque tale about a fisherman trying to find himself, and I’m pretty sure it was awful.

David:  For Gunpowder Moon, more of a pantser. I never wrote an outline and most of the plotting was done in my head. But once you’re working with an agent and a publisher you almost have to become a plotter, as they like to see a synopsis or outline of your next book.

David:  Just planting my backside in front of a computer and typing the first sentence. Once you put a few lines on the page things get easier.

David:  The first murder on the Moon will lead to the first war on the Moon if a haunted veteran and his crew of miners can’t unmask the killer.

TQ:  Tell us something about Gunpowder Moon that is not found in the book description.

TQ:  What inspired you to write Gunpowder Moon? What appeals to you about writing Hard SF?

David:  The Moon itself. I’ve always been fascinated by it. It shapes our lives in so many ways. It churns our oceans, guides how we hunt and fish and plant, and affects the behavior of just about every animal on our planet. As for the second part of your question, I love all SF but have always been drawn to the stories that are rooted in science, starting with Jules Verne. I remember being blown away by the scientific detail in The Mysterious Island when I was in grade school.

TQ:  What sort of research did you do for Gunpowder Moon?

David:  A lot! I started by studying the lunar atlas. Then I dug into lunar geology and topography. I also had to research a ton of stuff like lunar transportation and habitation, helium-3 mining, 3D printing, cosmic and stellar radiation, Lagrange points, rail guns, electromagnetic pulse weapons, high energy lasers, microgravity, orbital velocities, phenomena such as moon fountains, space law, impact craters, and fusion reaction. And I read a good bit of the Apollo mission transcripts, which were fascinating.

TQ:  Please tell us about the cover for Gunpowder Moon.

David:  I don’t know who the artist is—I just know they did a fantastic job. We had some back and forth about the finer details, but luckily my vision for the cover synched up with Harper Voyager’s. The cover does, at least symbolically, depict a major moment in the novel.

TQ:  In Gunpowder Moon who was the easiest character to write and why? The hardest and why?

David:  I’d say the protagonist, Caden Dechert, was the easiest to write. He’s a middle-aged white guy and so am I. It’s easier to write what you know. And like me, he’s both a cynic and an idealist. Probably the hardest characters to write were Lane Briggs and Lin Tzu. Lane is the safety office on Sea of Serenity-1. I wanted her to be a badass, being she’s the only woman on a station full of alpha males, but I didn’t want her to be too grim. I consider her to be the moral center of the novel and I hope that comes through. Lin Tzu is Dechert’s Chinese counterpart on the Moon. He operates a mining station on the nearby Mare Imbrium. He was difficult to write even though he’s only in a scene or two. When I was abroad in college we spent a day with Chinese students at Peking University in Beijing. I tried to model Tzu after a student I became friends with. He was quiet, contemplative, witty, and cautious. I hope I pulled it off.

David:  I focused more on the broader issue of human conflict in Gunpowder Moon, which is pretty weighty in itself. If there’s any social commentary in the novel, it’s probably just a reinforcement of the belief that people should be judged on their individual merit and not some prejudice that others have invented to bolster their own position in life.

TQ:  Which question about Gunpowder Moon do you wish someone would ask? Ask it and answer it!

David:   Could this really happen in the near future? The answer is yes!

TQ:  Give us one or two of your favorite non-spoilery quotes from Gunpowder Moon.

2. Jonathan Quarles as things are starting to get ugly on Luna:

“So much for the Sea of Serenity. Can we call it the Sea of Impending Doom now?”

David:  We’re talking to Harper Voyager about a second novel. Hopefully there will be more after that.

David:  Thanks so much for having me. 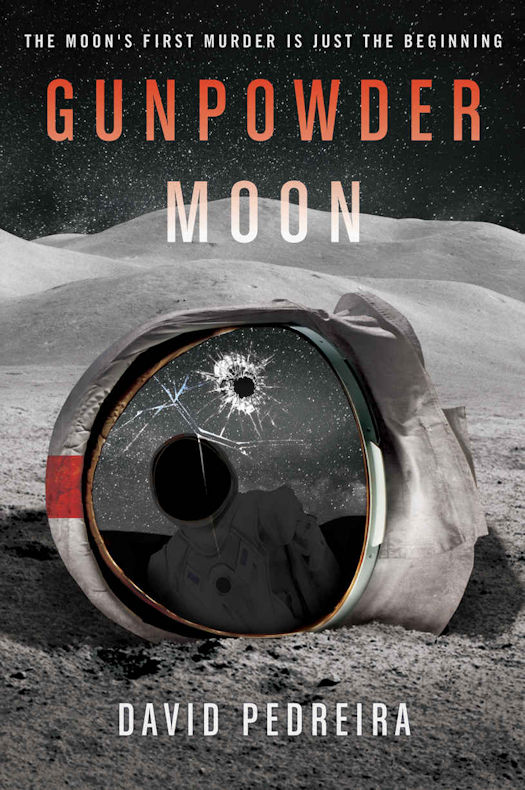 “Interesting quirks and divided loyalties flesh out this first novel in which sf and mystery intersect in a well-crafted plot...Pedreira’s science thriller powerfully highlights the human politics and economics from the seemingly desolate expanse of the moon. It will attract readers who enjoyed Andy Weir’s lunar crime caper Artemis.” -- Library Journal, starred review

A realistic and chilling vision of life on the Moon, where dust kills as easily as the vacuum of space…but murder is even quicker—a fast-paced, cinematic science fiction thriller, this debut novel combines the inventiveness of The Martian, the intrigue of The Expanse, and the thrills of Red Rising.

The Moon smells like gunpowder. Every lunar walker since Apollo 11 has noticed it: a burnt-metal scent that reminds them of war. Caden Dechert, the chief of the U.S. mining operation on the edge of the Sea of Serenity, thinks the smell is just a trick of the mind—a reminder of his harrowing days as a Marine in the war-torn Middle East back on Earth.

It’s 2072, and lunar helium-3 mining is powering the fusion reactors that are bringing Earth back from environmental disaster. But competing for the richest prize in the history of the world has destroyed the oldest rule in space: Safety for All. When a bomb kills one of Dechert’s diggers on Mare Serenitatis, the haunted veteran goes on the hunt to expose the culprit before more blood is spilled.

But as Dechert races to solve the first murder in the history of the Moon, he gets caught in the crosshairs of two global powers spoiling for a fight. Reluctant to be the match that lights this powder-keg, Dechert knows his life and those of his crew are meaningless to the politicians. Even worse, he knows the killer is still out there, hunting.

In his desperate attempts to save his crew and prevent the catastrophe he sees coming, the former Marine uncovers a dangerous conspiracy that, with one spark, can ignite a full lunar war, wipe out his team . . . and perhaps plunge the Earth back into darkness.

A former reporter for newspapers including the Tampa Tribune and the St. Petersburg Times, David Pedreira has won awards for his writing from the Associated Press, the Society of Professional Journalists, the Maryland-Delaware-DC Press Association, and the American Society of Newspaper Editors. He lives in Tampa, Florida.