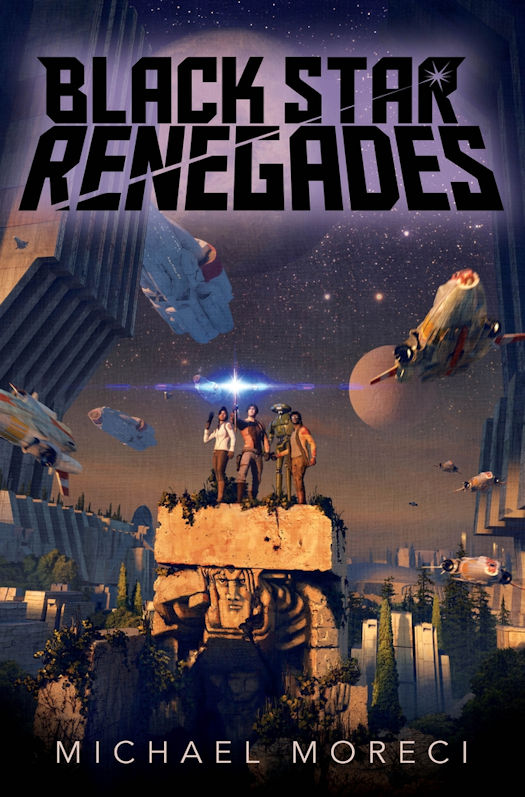 In the tradition of Star Wars, a galaxy-hopping space adventure about a galactic kingdom bent on control and the young misfit who must find the power within before it’s too late.

Cade Sura holds the future of the galaxy in his hands: the ultimate weapon that will bring total peace. He didn’t ask for it, he doesn’t want it, and there’s no worse choice to wield it in all of space, but if he doesn’t, everyone’s totally screwed. The evil Praxis kingdom is on the cusp of having every star system under its control, and if that happens, there’ll be no contesting their cruel reign. Especially if its fanatical overlord, Ga Halle, manages to capture Cade and snag the all-powerful weapon for herself.

Cade can’t hide from Praxis, and he can’t run from the destiny that’s been shoved into his hands. So he only has one option:

He has to fight.

Cade’s not going to let destiny send him on a suicide run, though. With some help from his friends—rebels and scoundrels alike—Cade’s going to use this weapon to chart a new destiny for the galaxy, and for himself.

He just has to do so before everyone around him discovers that he’s a complete and total fraud.

Blending the space operatics of Star Wars and the swagger of Guardians of the Galaxy, Black Star Renegades is a galaxy-hopping adventure that blasts its way from seedy spacer bars to sacred temples guarded by deadly creatures—all with a cast of misfit characters who have nowhere to go and nothing to lose.

Within a few life changing minutes Cade goes from being a young man with everything to live for to being on the run as the alleged saviour of the galaxy. A single weapon - the Rokura - has the power to bring peace to the empire if wielded by the Paragon. The problem is Cade has it and even he knows he isn't the true Paragon. Someone has to try to defeat the evil Praxis who have taken control of the galaxy by destroying planets and ruthlessly killing civilians. It's up to Cade and his friends to try. Good vs evil, powerful super weapons, and the heroes that wield them - Black Star Renegades has it all.

Michael Moreci's solo debut novel really packs a punch. Set in a vast galaxy where the evil Praxis empire is going for broke to stamp out the few remaining rebels gives the perfect backdrop for the story. Moreci created a great environment for Cade and his motley crew of renegades and machines. Cade himself is a likable character although I feel that Moreci could have spent just a little more time rounding him out. He was a tiny bit one dimensional as his reaction to certain life changing events in the first few chapters should have affected him more than they did. At least Moreci resisted the temptation to dilute the plot with too much romance with Cade and his sidekick Kira.

I like this book and think it was a solid debut. The thing that I think was slightly off putting is the comparisons to Star Wars. The reason I say this is that as I was reading I kept second guessing whether the plot and/or the characters were too similar to Star Wars. Although after a few chapters I forgot about that and just enjoyed Cade's story. This is an action packed read from page one all the way to the end. Well done Michael Moreci!
Posted by Melanie at 7:24 AM