THEY REMAIN - New Poster and Trailer

Based on the 2010 short story, "-30-" by award-winning author Laird Barron, THEY REMAIN explores the evolving relationship between Keith and Jessica, two scientists who are employed by a vast, impersonal corporation to investigate an unspeakable horror that took place at the remote encampment of a mysterious cult. Working and living in a state-of-the-art, high tech environment that is completely at odds with their surroundings, they spend their days gathering physical evidence, analyzing it, and reporting on their findings.

The intensity of their work, and their extreme isolation, bring the pair closer. But, when Jessica discovers a mysterious artifact of unknown origin, the dynamic between them changes: secrets are kept, sexual tensions arise, and paranoia sets in. Keith begins to have visions and is unable to distinguish whether they are nightmares or hauntings. Having lost all sense of what is real and what is imagined, all he knows is that the horror he and Jessica have been sent to uncover—a horror that could be biological, psychological, or supernatural— now threatens his very survival. 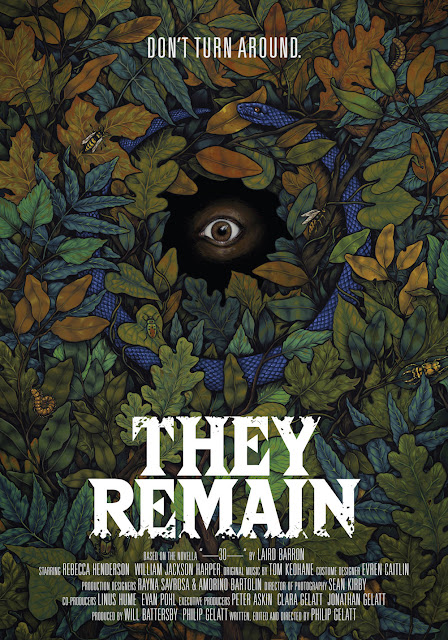 
See more about THEY REMAIN at this post: http://qwillery.blogspot.com/2018/02/they-remain-based-on-30-by-laird-barron.html

Winner of the 2010 Shirley Jackson Award, nine stories of cosmic horror from the heir apparent to Lovecraft’s throne.

Laird Barron has emerged as one of the strongest voices in modern horror and dark fantasy fiction, building on the eldritch tradition pioneered by writers such as H. P. Lovecraft, Peter Straub, and Thomas Ligotti. His stories have garnered critical acclaim and have been reprinted in numerous year’s best anthologies and nominated for multiple awards, including the Crawford, International Horror Guild, Shirley Jackson, Theodore Sturgeon, and World Fantasy awards. His debut collection, The Imago Sequence and Other Stories, was the inaugural winner of the Shirley Jackson Award.

He returns with his second collection, Occultation. Pitting ordinary men and women against a carnivorous, chaotic cosmos, Occulation’s nine tales of terror (two published here for the first time) were nominated for just as many Shirley Jackson awards, winning for the novella “Mysterium Tremendum” and the collection as a whole. Featuring an introduction by Michael Shea, Occultation brings more of the spine-chillingly sublime cosmic horror Laird Barron’s fans have come to expect.