Please welcome Sue Burke to The Qwillery as part of the 2018 Debut Author Challenge Interviews. Semiosis is published on February 6th by Tor Books. 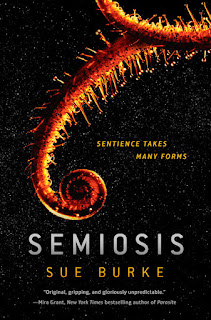 Sue:  Thank you for inviting me. When I was in grade school, I decided I would write a novel. I never finished it, and as I recall it was a rather derivative ghost story, but I also never forgot the goal. I wanted to be a writer from the moment I knew what writing was — before I even learned to write. That’s why I eventually became a journalist. I got paid to write every day!

Sue:  Hybrid. I start a piece knowing how it ends, but not always much more. Then I have to figure out the way to get there, creating the roadmap and landscape as I go along. When I finally arrive, I go back and try to plot the best route.

Sue:  The initial composition. I don’t even start with first drafts. I write “zero” drafts, early versions that are all exploration and experiment to create that roadmap, with a few side trips that go nowhere in the process but that were necessary to take. These zero drafts don’t count, so they don’t merit a number, which encourages me to take chances and relax. Out of that glorious mess, I extract a first draft.

TQ:  What did you find (other than length) to be the biggest difference in writing short stories versus writing a novel? How does being an editor impact your own writing?

Sue:  Novels can contain bigger, more complex ideas than short stories, the way the art for a mural can be more complex than the art for a postage stamp. I think that’s one way to evaluate an idea to decide if, say, your short story is really an epic trilogy: what would it look like as a painting? How big would that painting be?

Being an editor has given me more patience because I view writing as a process, not an end. Nothing starts out perfect — and anything can be improved. Again, to think of it as art, the elements of a piece often need to be rearranged and re-imagined before the final work can be completed. I’ve seen how many studies and sketches Pablo Picasso made before he painted Guernica. Even geniuses don’t expect to get it right the first time — and I can learn from how hard they work.

Sue:  I started out as a journalist, which taught me to be aware of the reader and to write to achieve a purpose for the reader. It also gave me a chance to learn a lot about the world because I covered everything from school board meetings to llama ranches (I’ve been kissed on the cheek by a llama!) to murder trials. I discovered that no matter what I expect, reality holds surprises and demands an open mind.

As far as writing style, one sentence made a big difference. It’s from the book Un Pueblecito: Riofrío de Ávila by a Spanish writer named Azorín, considered a master stylist. I read it in Spanish class in college. It says (my translation): “It’s not enough to be understandable; it’s necessary to aspire to be unable to be misunderstood.” He goes on to suggest some ways to do that, such as treating things one after another in simple, logical, often chronological order. Clarity, Azorín thought, was “the only excusable affectation” in writing. I still have that book decades later.

Sue:  Human colonists struggle to survive on an alien world, and they discover an unexpected dominant species anxiously awaiting them.

TQ:  Tell us something about Semiosis that is not found in the book description.

Sue:  The fippokats, a deceptively cute species suitable for pets, are based on my sister-in-law’s imaginary animal from childhood, which she graciously lent me to use and abuse. Thanks, Kathy!

TQ:  What inspired you to write Semiosis? What appeals to you about writing Science Fiction and in particular a novel about first contact with aliens?

Sue:  A long time ago, two of my houseplants attacked other plants, using them as things to climb on or to sink roots into and suck dry. After some research, I learned that plants are actually fierce: “at war with each other,” as one botanist put it. Science fiction gives me the chance to ask what if: what if plants were fierce — and intelligent? How could we encounter intelligent plants, and what could go wrong? How would it change us?

These kinds of questions illustrate what I see as the big difference between science fiction and “literary” fiction. All stories are about change, but where does the change come from? Literary fiction tends to focus on change arising from within individuals. Science fiction considers how changes in the material world affect individuals and societies, and those are the kinds of questions I’m more interested in. What if we’re not alone? What if we’re not the dominant species?

TQ:  What sort of research did you do for Semiosis?

Sue:  A lot. The plants in Semiosis don’t do anything Earth plants can’t — except think, which as far as we know now they don’t do. Botanists, foresters, and other people intimately involved with plants are continuously impressed by the abilities that plants have and how actively they’re involved with their surroundings. I have a shelf of books that I read and consulted.

TQ:  Please tell us about the cover for Semiosis.

Sue:  The cover uses a photo by Nigel Cattlin and a design by Jamie Stafford-Hill. The tendril is of an Earth plant, a sundew, which is carnivorous. And hungry.

TQ:  In Semiosis who was the easiest character to write and why? The hardest and why?

Sue:  The easiest was Lucille, who was loosely based on someone I know who has boundless energy, determination, and optimism. The hardest was Higgins because I cried when I wrote some of those scenes.

Sue:  The colonists must constantly cope with issues of good governance. My years covering government as a journalist convinced me of its importance. Who leads? How do leaders make decisions? Who has a voice in those decisions, and who is affected? How can leaders be held responsible for their decisions? I think what’s happening now in Washington, DC, shows how leadership has social consequences.

TQ:  Which question about Semiosis do you wish someone would ask? Ask it and answer it!

TQ:  Give us one or two of your favorite non-spoilery quotes from Semiosis.

“... like the good times you can’t quite recall but surely they happened sometime, maybe tomorrow, you just have to wait and see.”

Sue:  I’ve written a sequel, and we’ll see if Tor is interested. In the mean time, I’m writing short stories, and translating Spanish science fiction authors into English. Most recently, Clarkesworld published my short story “Who Won the Battle of Arsia Mons?” in November 2017, and Asimov’s will publish “Life From the Sky” in May/June 2018. My translations include the anthology Spanish Women of Wonder, published by Palabaristas in 2017.

Sue:  Thank you for having me! 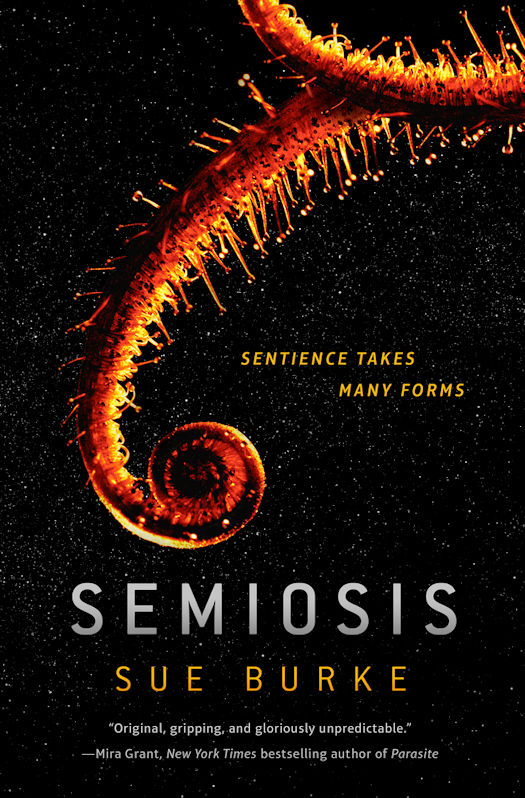 Colonists from Earth wanted the perfect home, but they’ll have to survive on the one they found. They don’t realize another life form watches...and waits...

Only mutual communication can forge an alliance with the planet's sentient species and prove that humans are more than tools.

SUE BURKE spent many years working as a reporter and editor for a variety of newspapers and magazines. She is a Clarion workshop alumnus, and she has published more than 30 short stories. Burke also worked extensively as a literary translator, and while living in Madrid, Spain, she headed the long-running Madrid Writer’s Critique Group. Her translations include the fantasy novel Prodigies by Angélica Gorodischer, the bilingual science fiction anthology Castles in Spain / Castillos en el aire, and the script for the science fiction movie Mindgate.