PORTLAND, OR, 02/16/2018 — The highly-anticipated OBLIVION SONG #1 by Robert Kirkman (THE WALKING DEAD, INVINCIBLE) and Lorenzo de Felici will launch in comic book stores on Wednesday, March 7th. There will be no additional printings for this launch issue, so fans are encouraged to add this sure-to-be-hit series to their pull lists and hit their local comic shops in time to snag their copy.

“The response to this new series from the retailer community has been overwhelming so far, and it looks like this launch is shaping up to be huge,” said Kirkman. “Lorenzo and I are thrilled. I know keeping a new series on the stands so new fans can get caught up when issue #2 comes out and beyond is extremely important to the life of a new series. That said, I want people to be able to get the first printing of issue #1 to add to their collection. So we're going to avoid selling out in the first place by printing enough to hopefully meet or exceed what all indications say will be a massive demand.”

A decade ago, 300,000 citizens of Philadelphia were suddenly lost in Oblivion. The government made every attempt to recover them, but after many years, they gave up. Nathan Cole...won't. He makes daily trips, risking his life to try and rescue those still living in the apocalyptic hellscape of Oblivion. But maybe...Nathan is looking for something else? Why can't he resist the siren call of the Oblivion Song? 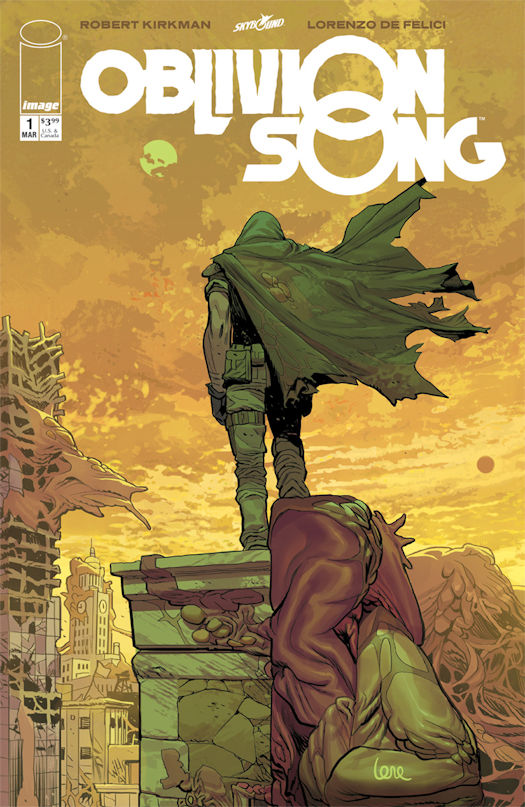 
ABOUT SKYBOUND ENTERTAINMENT
Founded in 2010, Skybound Entertainment is a multiplatform entertainment company specializing in television, comics, film, digital content, interactive, gaming, and merchandise. The company is led by The Walking Dead creator Robert Kirkman and his longtime producing and business partner David Alpert.
Posted by Qwill at 7:23 AM