Interview with Robert Ashcroft, author of The Megarothke


Please welcome Robert Ashcroft to The Qwillery as part of the 2018 Debut Author Challenge Interviews. The Megarothke is published on February 27th by Cinestate. 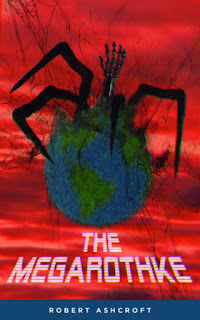 Robert:  My sophomore year of high school I wrote a piece of flash-fiction. Sort of a dramatization of the “Albatross Riddle” that ended up being around 1000 words. I remember showing it to my little sisters and cousins and thinking, “This stuff is pure gold.” I would highly recommend looking up the riddle online. I would not highly recommend reading my short story about it.

Robert:  First of all, I’m not a fan of the word “pantser.” I feel that it is too negative. Like, how is it fair that one side gets the word “plot” included in their name and the other gets a variation of the word “pants?” What if the terms were “Creative Visionary” vs “Methodical Producer of Contrived Events Ready to be Turned into a Script for Hollywood Consumption?” Because I do think that over plotting can lead to a sort of air-tight movie structure, and I one of my favorite things about books is that they can still be so ragged. You can really get lost in a book.

And if you think I’m being overly defensive here, it’s because there’s a lot of condescension among the “plotters” of the world! You know who you are!

I like to think of writing a novel like the expedition of Lewis and Clark. You’re not exactly sure what’s going to happen, but you’ve got some guns, some rations, and god dammit―you are going to get to the Pacific Ocean. In the end, I much prefer G.R.R. Martin’s terms “Gardeners vs Architects.” Under these definitions, I’m a gardener.

Robert:  Finding the courage to write about difficult subjects. We all read sex scenes as if they were nothing. But then you think about your mom or your friend reading it and all of the sudden it’s NC-17. As you write it, you see everyone you know imagining you as that particular character. This is a rather debilitating aspect that a lot of people never really address.

Let’s say your character murders someone. Or contemplates suicide. There’s a certain barrier that comes with having a loving family and its mostly an artificial one. You have to realize that your writing, to them, is just like painting or fixing cars. An awkward little hobby that they put up with during conversation. Meanwhile you have to believe in yourself to the fullest extent, to live your work, and to write through all criticism and doubt.

Robert:  I still think that J.D. Salinger is in the running for one of the greatest writers of all time. I reread Franny and Zooey recently and he’s got a masterful touch for scene variation, character description, weaving ideas into conversations―he just crushes it. As per the Megarothke specifically, here are the top ten influences:

1. I am Legend, Richard Matheson

6. In the Miso Soup, Ryu Murakami

TQ:  Describe The Megarothke in 140 characters or less.

“A book about a monster that brings about the apocalypse and then lives under Los Angeles while abducting humans to perform experiments on them.”

TQ:  How do you pronounce "Megarothke"?

Robert:  I say it, “Mega-Roth-Key.” It’s worth pointing out that my grandma’s maiden name was Roth. I’m sure psychologically this factors in somehow, but I’m not a psychologist.

TQ:  Tell us something about The Megarothke that is not found in the book description.

Robert:  Sometimes I forget to mention that it’s based on the myth of the Minotaur. You’ve got Theo (Theseus), Aria (Ariadne) and the Megarothke (the Minotaur). I probably should have had it added to the description, but I was deployed during the early phases of the publishing process and really couldn’t spend as much time on it as I would have liked. That being said, the publishers wrote a really thorough two paragraph summary that really gets at the core of the book. I’m not sure I even really understood what the book was until they had summarized it for me.

TQ:  What inspired you to write The Megarothke?

Robert:  The name came to me in a sort of dream-like state while living in South Korea in 2010. I wrote a short story with the same title and then began adding to it. Then it was a novella, and then a novel, and all throughout the process, people kept saying, “This is good, but you’ve got to change the name.” To me, the book only exists because of the name. I don’t think I can explain it rationally. I get these things sometimes, like an obsession, and my mind won’t let them go until the idea has been set free.

TQ:  The Megarothke is described as "sci-fi/horror novel infused with Nietzschean philosophy..." What appeals to you about writing SF and Horror? Why Nietzsche?

Robert:  Nietzsche is a big part of the book in the sense that the Megarothke co-opts a lot of popular misinterpretations about the ubermensch. There is a sort of love affair in some tech circles with “improvement” and I really think that the natural extension of this would lead to an other-than-human form of life. Within Zarathustra, there are a lot of really empowering lines. Lines that encourage you to go above and beyond those around you. The problem with empowerment is that sometimes it leads to selfishness and cruelty. When we’re too powerful, we lose perspective and empathy.

I first read Thus Spoke Zarathustra when I was living alone in Mexico as a twenty year old. I didn’t understand it but I would go back and reread sections, almost like you read a religious text.

TQ:  What sort of research did you do for The Megarothke?

Robert:  I spent a lot of time looking at maps of Los Angeles.

TQ:  Please tell us about the cover for The Megarothke.

Robert:  The cover design is styled to mimic a retro, straight-to-VHS science fiction movie. The word “gonzo” got used a lot during the conversations about it’s creation, and within the right film context that makes a lot of sense. When I look at designs online, minimalist renderings of famous works often catch my eye, but I have to think: What if I was looking at stand of twenty books by authors I’d never heard of before?

The more I see it out there, the more I love it. At the end of the day I think Cinestate and their designer, Ashley Detmering, did a great job.

TQ:  In The Megarothke who was the easiest character to write and why? The hardest and why?

Robert:  The easiest character was probably Takatoshi, because his lines just sort of came from a natural place. The hardest character was Aria, the semi-love interest, because she has her own unique story line and it’s hard to capture a strong female character without giving them a lot of screen time. To be honest, this was even harder than writing the transgendered character, Mathew, because he had a lot to say.

Aria is stuck within a power structure she can’t control, surrounded by a bunch of violent maniacs with very little to lose. She needed to be tough but vulnerable, strong but likeable―I’m not sure if I succeeded. I got a lot of input from some of the members of the writing group I was a part of in Harker Heights, TX: Alexandra Burt, Sandra Desjardins, Andrea McAuley and Kat Wooley. They would say things like, “No woman in the history of the world has ever thought this sentence.” At several key points, the actions of the female characters changed in response to their insight and it’s a much stronger book because of it.

I’ve also got about sixty pages of a parallel novel from Aria’s point of view. She definitely has the most unpublished backstory throughout the book.

Robert:  There’s a transgendered character in the novel. In the end, I really believe that it’s a civil rights/human rights issue and I hope that comes across within the text. Mathew is probably the most complex character in the novel. He's not airbrushed and perfect, but he really does have goals and aspirations that mature and shift as the novel progresses. Without getting too political, I believe America is a country that should lead the way in creating a space where all people can live as they choose.

TQ:  Which question about The Megarothke do you wish someone would ask? Ask it and answer it!

Robert:  How much chocolate did you eat while writing the Megarothke?

Way too much. I went through entire phases of different brand loyalty and styles, and am still going through them. I write in the mornings, so I don’t even eat breakfast anymore. I just slam down chocolate with coffee until my stomach hurts and call it good. I heard once about George Harrison mentioning that he liked jelly beans (or jelly babies or some British nonsense) and then getting pelted with them on stage. I would gladly get pelted with chocolate. That being said, I’m not a Beatle.

TQ:  Give us one or two of your favorite non-spoilery quotes from The Megarothke.

Robert:  This one gets brought up in a lot of reviews: “Intimacy can be sudden: a primal ache; a desperation that your whole life has been missing something up until that point.”

But I’m more partial to this one: “There are rooms you can sense before you actually trace their outlines, almost as if your body were able to inhale a portion of their expanding volume.”

Robert:  I’m working on a military science fiction novel called The Bureaucracy and the Egregore. Much like The Megarothke, I’ve been told the title will never work. I hope to have the first draft finished by May, 2018, and then to be done within the year. I’ve been writing it for over a year now and I think that two to three years per novel is as fast as I can go and still feel I’m doing a good job. 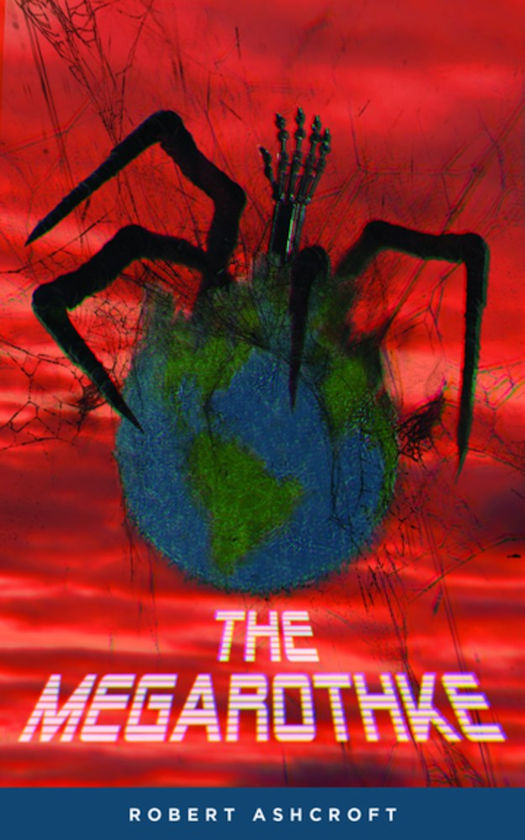 Seven years after the limitless depths of the Hollow War decimated Earth, leaving only 50,000 humans to fight for survival in Los Angeles, Theo Abrams is sent on a mission to destroy the enigmatic being that initiated this apocalypse, confronting the fact that humanity's yearning to transcend reality caused its downfall . . .

Robert Ashcroft, trained as cryptologic linguist, has worked as a State Department contractor and was recently mobilized to serve abroad with the US Army Reserve. 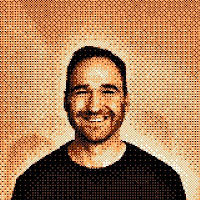 Robert Ashcroft, trained as cryptologic linguist, has worked as a State Department contractor and was recently mobilized to serve abroad with the US Army Reserve.