BARRIER Miniseries by Brian K. Vaughan and Marcos Martin Available In Print This May

BARRIER is a truly unconventional drama that tackles violence, language, and illegal immigration—with a shocking sci-fi twist. Printed in its original “landscape” format and graced with gorgeous cardstock covers, each comic is meant to be a durable work of art.

“I’m enormously proud of this story, not least because it features some of the best artwork ever from the incomparable Marcos Martin and Muntsa Vicente,” said Vaughan. “Everyone behind PanelSyndicate.com is so excited that Image is bringing this story to print and making these five extra-sized issues available exclusively through local comic shops. Gracias!”

Mature readers will be able to pick up the massive 50-plus-page first issue for free on Free Comic Book Day on May 5th. The following week, a special collector’s edition of the first issue will be released in a larger size to match the next four issues being released weekly throughout the rest of May.

“Huge credit should be given to BKV and Martin for coaxing a compelling and powerfully human story out of what could have easily descended into pseudo-propaganda. BARRIER plays with the concepts of tension and isolation in a truly captivating way.” —Multiversity Comics

“Marcos Martin is one of the best artists in comics, and BARRIER is an outstanding spotlight for his storytelling skills.” —AV Club 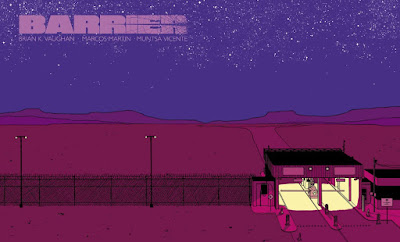 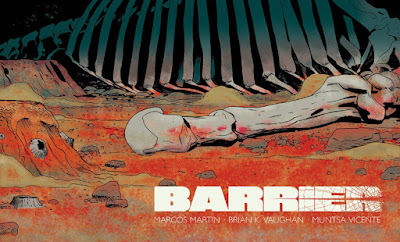 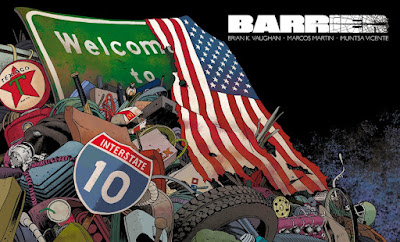 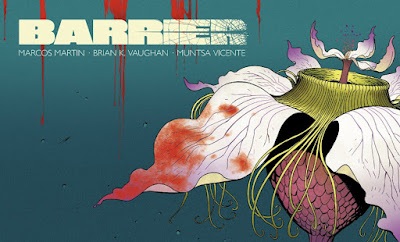 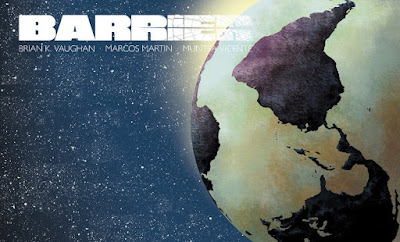 [click to embiggen]
ABOUT IMAGE COMICS
Image Comics is a comic book and graphic novel publisher founded in 1992 by a collective of bestselling artists. Image has since gone on to become one of the largest comics publishers in the United States. Image currently has five partners: Robert Kirkman, Erik Larsen, Todd McFarlane, Marc Silvestri, and Jim Valentino. It consists of five major houses: Todd McFarlane Productions, Top Cow Productions, Shadowline Comics, Skybound Entertainment, and Image Central. Image publishes comics and graphic novels in nearly every genre, sub-genre, and style imaginable. It offers science fiction, fantasy, romance, horror, crime fiction, historical fiction, humor and more by the finest artists and writers working in the medium today. For more information, visit www.imagecomics.com.
Posted by Qwill at 5:50 AM