Interview with Chandler Klang Smith, author of The Sky Is Yours


Please welcome Chandler Klang Smith to The Qwillery as part of the 2018 Debut Author Challenge Interviews. The Sky Is Yours was published on January 23rd by Hogarth. 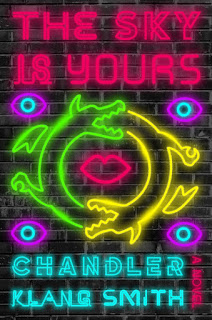 Chandler:  I was recently visiting my parents in Springfield, Illinois, when I found a collection of short stories I wrote in second grade entitled My Big Book. It was full of invented fairy tales (like one where a knight slays an alligator to rescue a princess, only to have her plot to kill him) and surreal Kafkaesque parables (like one where a little girl wakes up with a fishtail in place of her legs). I barely remembered it existed, but saw a curious connection to my adult sensibilities. I guess I never change.

Chandler:  Definitely a bit of both: I map things out for a while, get bored and dig into the minutiae of a scene… before getting back into a Big Picture Mode again.

Chandler:  I'm a perfectionist so when I can't get something right the first time, I get stuck in a morass of self-loathing. I'm better now than I used to be at realizing things will turn around, but it's still a struggle.

TQ:  Describe The Sky Is Yours in 140 characters or less.

Chandler:  This is a story of what it is to be young in a very old world #dragons

TQ:  Tell us something about The Sky Is Yours that is not found in the book description.

TQ:  What inspired you to write The Sky Is Yours? Why did you set the novel in a dystopian future New York City?

Chandler:  Because I was living in a dystopian present-day New York City! That sounds like a joke, but it's not. I remember sitting outside on my lunch break, working on this novel in the shadow of the Lipstick Building where Bernie Madoff practiced his Ponzi scheme. My materials may be fantastical but I'm interested in exploring the same kinds of rottenness we see in our world.

TQ:  What sort of research did you do for The Sky Is Yours?

Chandler:  No research per se writing: this book was really about spelunking the depths of my own imagination. I did look up some technical firefighting terminology for one passage but that was about it.

TQ:  Please tell us about the cover for The Sky Is Yours.

Chandler:  The iconic neon cover was created by Michael Morris, a brilliant designer at Crown. It depicts the two dragons, yellow and green, circling over the city. Early in the novel I describe them as twisting together like the helix of DNA, which I think inspired the ouroboros motif. I absolutely adore it, and I'm dazzled by how much better it is than anything I could have come up with myself.

TQ:  In The Sky Is Yours who was the easiest character to write and why? The hardest and why?

TQ:  Which question about The Sky Is Yours do you wish someone would ask? Ask it and answer it!

Chandler:  Does the dog have hands? Yes, the dog has hands.

TQ:  Give us one or two of your favorite non-spoilery quotes from The Sky Is Yours.

“Ripple doesn't understand delayed gratification or compromise, he's never seen the point. He doesn't want to want; he's never wanted for anything. It's not in his nature. He's been spoiled to perfection. He has foie gras for brains.”

“The prison colony is a special kind of damage to the city: a collaboration between the dragons and ourselves. A hell we built together.”

Chandler:  I'm working on a new novel, a noir about an obsessive love affair that transports a couple into a heightened, unreal fantasy space. It's just as weird as this book been but in a completely different way. 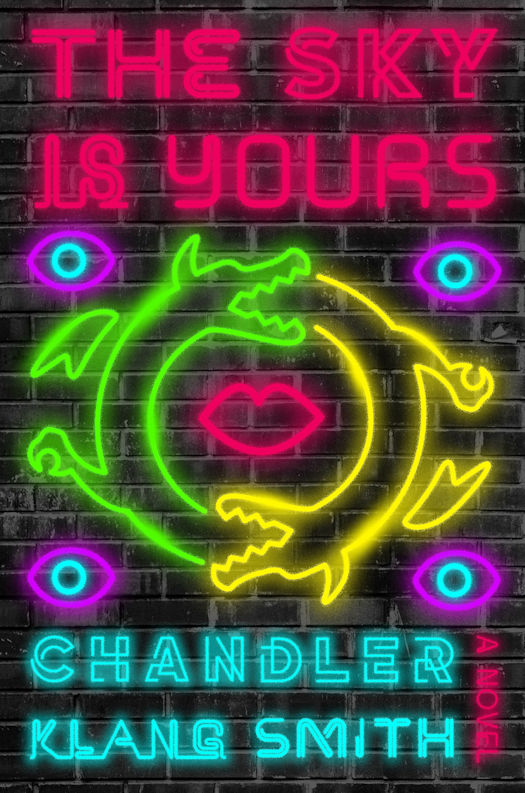 “There have been a lot of books heralded as heirs to Infinite Jest, but I can happily say: this is it.” — Leah Schnelbach, Tor.com

A sprawling, genre-defying epic set in a dystopian metropolis plagued by dragons, this debut about what it’s like to be young in a very old world is pure storytelling pleasure

In the burned-out, futuristic city of Empire Island, three young people navigate a crumbling metropolis constantly under threat from a pair of dragons that circle the skies. When violence strikes, reality star Duncan Humphrey Ripple V, the spoiled scion of the metropolis’ last dynasty; Baroness Swan Lenore Dahlberg, his tempestuous, death-obsessed betrothed; and Abby, a feral beauty he discovered tossed out with the trash; are forced to flee everything they’ve ever known. As they wander toward the scalded heart of the city, they face fire, conspiracy, mayhem, unholy drugs, dragon-worshippers, and the monsters lurking inside themselves. In this bombshell of a novel, Chandler Klang Smith has imagined an unimaginable world: scathingly clever and gorgeously strange, The Sky Is Yours is at once faraway and disturbingly familiar, its singular chaos grounded in the universal realities of love, family, and the deeply human desire to survive at all costs.

The Sky Is Yours is incredibly cinematic, bawdy, rollicking, hilarious, and utterly unforgettable, a debut that readers who loved Cloud Atlas, Super Sad True Love Story, and Blade Runner will adore.

CHANDLER KLANG SMITH is a fiction writer from Springfield, Illinois. She graduated from Bennington College and has an MFA from Columbia University. She currently lives in New York City.