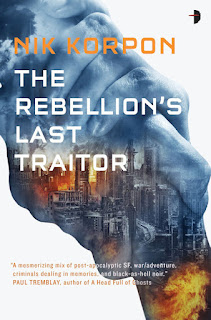 Nik:  I've been writing for a long time, though only writing seriously for about ten years. It started as bad Nirvana songs, then bad punk rock songs. For a while I thought I was the next coming of Jack Kerouac (hey, I was in my early 20s) but none of my writing was actual narrative, just sort of experimenting with language and figuring out how things work. Then I found Irvine Welsh, Chuck Palahniuk, and Herman Hesse while I was backpacking around Europe. I think the definitive moment was reading 31 Songs by Nick Hornby at a bookstore somewhere in Austria. I remember reading his entry about "Thunder Road" and thinking, Holy crap, I could do this. I went to a nearby McDonald's and got a coffee and started writing 31 (More) Songs, which was as terrible as it sounds. Soon after that I discovered Craig Clevenger, Will Christopher Baer, and Stephen Graham Jones via an online community called The Velvet, and they totally lit my hair on fire. It was off to the races after that.

Nik:  Definitely a plotter. I've tried to write two books by pantsing and they both fell apart after 20k words. I've got this long convoluted process of writing which is totally inefficient but works for me. I start by riffing on ideas in a Moleskine until I have a good idea of what the book is about, then write out the story beats on index cards. When I get stuck or can't figure out why a character is doing something, I go back to the Moleskine, then keep going like that until I have the story right (or what I think is right). Then I'll type up a narrative synopsis, usually round 10k words or so, and send it to my agent. We'll workshop that until it's right, at which point I'll finally start writing for real. It takes a bit of time to get there, but the long process irons out a lot of the kinks and makes me feel confident that the book will work, which frees me up to explore a lot of the small details and nuances. It also makes the editing process way easier. Despite all that work and editing, though, I'm always worried the book is hot buttered garbage as soon as I finish writing it. Writer's curse, I suppose.

Nik:  Sitting down and doing it. Not looking at Twitter or whatever and just writing. I have two kids and work two jobs, so finding little pockets of time where I can actually focus can be tricky.

TQ:  Describe The Rebellion's Last Traitor in 140 characters or less.

Nik:  A disgraced rebel-turned-memory thief discovers everything he was told about his family's death is a lie. Then everything goes to hell.

TQ:  Tell us something about The Rebellion's Last Traitor that is not found in the book description.

Nik:  It was heavily inspired by The Pogues, the Old Firm (the soccer rivalry between Celtic and Rangers in Glasgow), and Justified. And there's a Shaun of the Dead reference in there, which has become sort of a running joke for me.

TQ:  What inspired you to write The Rebellion's Last Traitor? What appeals to you about writing SF and in particular a novel with a dystopian setting?

Nik:  I tend to write in clusters. I'd written a couple stories about drug dealers, then boxers. Traitor was written during a thief cluster, but I'd just written a book with a regular thief and wanted to do something different. I was trying to think of a less common thing they could steal and eventually hit on memories. I've always been fascinated by the concept of identity, that our conception of ourselves is informed by what we remember about ourselves, and that idea of stealing memories seemed to fit the theme well. As far as setting, it was originally much more dystopian but my agent suggested taking it in a more sci-fi direction as it would lend itself well to that (and dystopian fiction is a tough sell now). The nice thing about SFF—and something I'm discovering right now after two real-world thrillers I was trying to figure out just bit the dust—is that there aren't many rules and my imagination can run wild. I want to write a wild west scene? Make a section of the world a desert. Want to have a Chinese junk market a la Blade Runner? Just make one. In SFF, all these things can coexist in close proximity.

TQ:  What sort of research did you do for The Rebellion's Last Traitor?

Nik:  A lot of the character names are based on Celtic mythology, so I read a lot about that. I've read a lot about the Easter Rising of 1916 in Ireland, which also served as inspiration, so I brushed up on that. Mostly it's for names and themes, versus how things actually work. I'd never want to write a police procedural for instance, because there's so much research involved. I'd rather just write the story.

TQ:  Please tell us about the cover for The Rebellion's Last Traitor.

Nik:  Steve Stone did a fantastic job on that. When Marc (the head robot at Angry Robot) sent it over, I was over the moon. I think it encapsulates the book really well because it gives a little vignette of the city—with the Amgerin neighborhood burning in the background!—and framed by two hands holding tight to each other, which is a multi-faceted theme in the book.

TQ:  In The Rebellion's Last Traitor who was the easiest character to write and why? The hardest and why?

Nik:  Henraek and Walleus were probably both the easiest and the hardest, because they're two sides of the same coin, but their voices had to remain distinct. I can hear the differences between them in the small things—tone of voice, vocabulary, syntax—but a couple reviews have dinged me on them being too similar. Not saying they're wrong, maybe it's just personal preference. Emeríann was tough to write because she's a very tight mix of strength and vulnerability, idealism and pragmatism. Making sure she didn't come off as more one than another took a number of passes. I'm also very cautious when writing anyone who isn't a white dude (as I am) because I want to make sure they're right—not pandering, not stereotypical, not appropriating. It's a strange situation, because no one wants to read books that only feature white men, but I try to be careful about how I write other characters. I try to just stay true to the character and hope that shows through. Maybe I'm over-sensitive about that stuff.

Nik:  There was a lot more socio-political commentary in early drafts but I eventually cut back on it. I didn't want it to come off as preachy or anything and eventually I realized that a lot of the leftist ranting was distracting from the story.

TQ:  Which question about The Rebellion's Last Traitor do you wish someone would ask? Ask it and answer it!

Nik:  Man, I've never thought about that. No one's ever asked about soccer in it. Maybe it seems normal because it's a vaguely UK setting, but, as a long-time fan of both soccer and crime novels, I didn't see them meet very often and though it'd be cool to have it in there. It was also partially an homage, as I was having a lot of trouble finding an in to the book early on, and eventually found it while watching a Vice documentary on the Old Firm.

TQ:  Give us one or two of your favorite non-spoilery quotes from The Rebellion's Last Traitor.

Nik:  I think this sums up the book pretty well: "The old man did nothing to deserve this but I understand the weight the father carries, how the soul of a son can be marred by his father’s sins."

Nik:  The next book in the trilogy, Queen of the Struggle, will be out in January. It picks up about six months after the end of Traitor and follows two characters as they navigate the fallout of Traitor's finale. It was a difficult book to write but I'm really proud of it. I'm hopeful people like these two enough that I'll be able to write the third, final book of the trilogy.

Nik:  Thanks for having me! 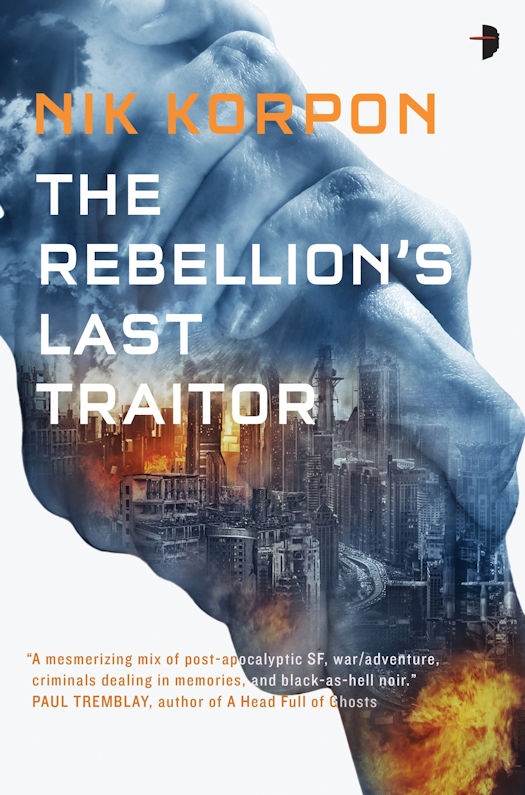 In a dystopian world ravaged by war and environmental collapse, one man fights history to discover the truth about his wife and child.

After decades of war, the brutal Tathadann Party restored order toshattered Eitan City by outlawing the past and rewriting history. Memory is a commodity – bought and sold, and experienced like a drug. Henraek works as a Tathadann memory thief, draining citizens’ memories.

Everything changes when Henraek harvests a memory of his own wife’s death, in the hidden rebellion that once tore apart their city. Now he will do whatever it takes to learn the truth – even ifit means burning Eitan City to the ground.

Nik Korpon is the author of several books, including The Soul Standard and Stay God, Sweet Angel. He lives in Baltimore with his wife and two children.