Interview with Alec Worley, author of Judge Anderson: Year One


Please welcome Alec Worley to The Qwillery. Judge Anderson: Year One was published on June 13th by Abaddon. 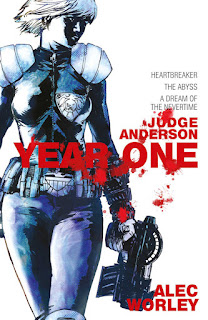 Alec:  I starting writing proper stories outside of school when I was around nine/ten maybe. Loads of Fighting Fantasy-type gamebooks with loads of gore. I was pleased to find out later in life that the headmistress put on a watch-list in secondary school for this crazy-sick horror story that I wrote for an English assignment. I also wrote stories to entertain my friends. My best mate would call me up of an evening to ask if I could write him something full of barbarians and swordfights. Good practice for a freelance career. As to why, I’ve always been into genre stories – horror, fantasy, sci-fi – and just wanted to be part of that world.

Alec:  Definitely a plotter. At this stage in my experience, at least, I have to work from tightly planned breakdowns. I have to know what’s driving a scene in terms of stakes, what the characters want, how much they know, what are the limitations of any fantasy mechanics at work in the scene (a big one this). Knowing all this stuff helps minimise mistakes in a first draft or at least help define what doesn’t work. I’ll then break down the breakdown scene by scene into smaller ‘draft zero’ type scene plans. Weirdly, establishing the beats of the scenes like this gives me the freedom to be spontaneous when actually writing, and suddenly the characters are coming alive in your hands and doing things you never expected.

Alec:  Ha! All of it. I’ve only just learned how to endure first drafts and to ‘fail early, fail fast’ as Pixar’s Andrew Stanton puts it. But overall, it’s the time it all takes. Unlike comics, which work on a strict page count, prose is much more the wild west. Every time I get a commission, I’m petrified I’ll miss the deadline as my word counts just keep rising and rising and rising. You end up feeling like you’re drowning. It’s horrible. I’m currently teaching myself to just focus on the time I’ve got and fill the hours with solid work.

TQ:  What has influenced / influences your writing? How does writing comics affect your prose writing?

Alec:  I love stories and storytelling, all the twists and turns and catharsis that melodrama can afford. Maybe that’s at odds with the fact that I also love really ornate, poetic prose like Mervyn Peake and Angela Carter. Carter just blew my mind when I was a teenager. I couldn’t imagine how anyone could write like that. It was like this beautiful alien language. Movies and TV were my first love as a kid, and I studied that form under my own steam so I guess I’ve got a decent sense of how to tell a story visually. Whether I’m writing prose or a comic, it always feels like I’m shooting a movie I can see in my head.

TQ:  Describe Judge Anderson: Year One in 140 characters or less.

Alec:  It’s a collection of three interlinked novellas covering Anderson’s traumatic first year on the street as a Psi-Judge.

TQ:  Tell us something about Judge Anderson: Year One that is not found in the book description.

Alec:  It was the toughest thing I’ve ever written, but I’m ridiculously proud of it.

TQ:  What appeals to you about writing in the Judge Dredd world?

Alec:  Mega-City One is incredibly versatile. It’s like Terry Pratchett’s Discworld in that you can utilise it to tell pretty much any kind of story or explore any kind of idea. Anderson’s my favourite character in the Dreddverse and I was fascinated about what the world would look like seen through the eyes of a psychic cop, as well as an indomitable optimist and part of this terrible fascistic machine that is the Justice Department

TQ:  What sort of research did you do for Judge Anderson: Year One?

Alec:  Tons! I did a lot of research into neuroscience and psychology to begin with, just to get a handle on exactly how Anderson perceives other peoples’ thoughts via telepathy. The first story (or first act), Heartbreaker, is about a killer stalking a futuristic dating site. The whole idea came about from my reading an article about a woman’s hellish experience of online dating. So I did lots of research into dating sites and the psychology behind them all, how they’ve affected our view of romance, sex and relationships, all the cultural politics behind that.

I also did lots of practical research into things like police tactics, guns, etc. I’ve got a friend (the same best mate who used to ask me to write barbarian stories for him) who’s a martial artist. He went through all the fight scenes for me. The second story, The Abyss, is set in a high-security psychiatric facility, which I based on Broadmoor Hospital. I did some writing exercises based my going through a book of homicide photos and used that as a basis for the prisoners’ streams-of-consciousness, which Anderson taps into at one point. That was a fun afternoon! Also, Anderson herself is suffering from depression and PTSD, so I dug into a lot of stuff there.

I do a lot of research into themes as well as nuts-and-bolts practical stuff. The Abyss was about the difference between justice and revenge, while the third story, A Dream of the Nevertime, was about the modern obsession with social justice, how that can be fetishized and become as destructive as the very thing it opposes, but also how to find the right balance, and so on. I think these things become more complex and ambiguous the deeper you dig into them. It’s good to explore other peoples’ ideas on different subjects too, as it broadens your own understanding, and allows you to explore things from every angle. But having done all that work, you then have to bury it all and dramatize it within the action. Preaching your opinions at the reader is polemics not storytelling.

TQ:  In Judge Anderson: Year One who was the easiest character to write and why? The hardest and why?

Alec:  I honestly can’t say anyone was easy to write! I have a tendency to overcomplicate. In this case, I may have over-explored everyone’s pathology in my own mind, and gotten carried away in terms of shading in all the characters, which makes the dramatic actions-reactions between them all the more interesting and unexpected, but also makes them that much harder to write.

Anderson herself, hands-down, is the toughest to write. As a psychic, she’s Kryptonite to drama. So in terms of plotting the story, I had to do a lot of juggling, as well as being very clear in my own mind about what was motivating her in every scene and how much she knew at any given time. It’s hard to keep a character like that conflicted rather than just have her solve her problems straight away. It doesn’t help that her sidearm carries several different types of bullets (explosive, heat-seeking, armour-piercing, etc) and she’s a star-pupil with Mossad-level training. So many times, I’d get to a point in the story and go, ‘Waaaaaaaait a second. What’s stopping her from just busting this guy straight away?’ A nightmare.

TQ:  Which question about Judge Anderson: Year One do you wish someone would ask? Ask it and answer it!

Alec:  I wish someone would ask, ‘What can I get out of this that I can’t get out of the comics?’ And I’d answer, ‘There’s only so far you can go in a five-page 2000 AD strip in terms of exploring character. Prose allows us to go on a kick-ass action-adventure, but also go deeper into Anderson’s character than we’ve ever been before.’

TQ:  Give us one or two of your favourite non-spoilery quotes from Judge Anderson: Year One.

Alec:  “Anderson let him go.” [Writing that bit just about broke my heart.]

Alec:  I’ve just finished another couple of Anderson comics (based on the 2012 Dredd movie), which are collected up in the graphic novel Dredd / Anderson: The Deep End (out 13 July). I’ve also got a few Dredd stories in the Dredd: The Cape and Cowl Crimes collection (out now). I’m doing another Star Wars project for Panini Germany, as well as more Teenage Mutant Ninja Turtles comics for Panini UK and more Warhammer shorts for Black Library. Other than these, everything I’m working on right now is either hush-hush or at the pitch stage.

Alec:  And thank you! 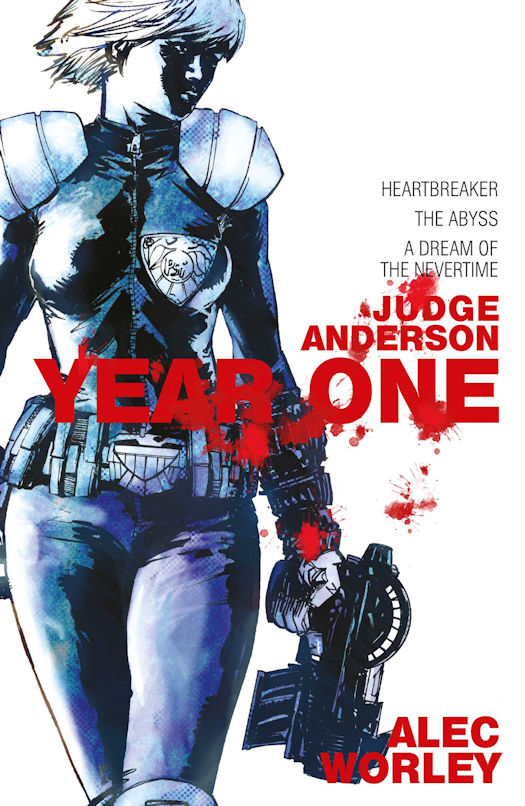 The untold story behind Mega-City One's most famous telepath and Judge Dredd partner, Judge Anderson, in her first year on the job!

Mega-City One, 2100.  Cassandra Anderson is destined to become Psi-Division’s most famous Judge, foiling supernatural threats and policing Mega-City One’s hearts and souls. For now, she’s fresh out of Academy and Psi-Div themselves are still finding their feet.

Heartbreaker: After a string of apparently random, deadly assaults by customers at a dating agency, Anderson is convinced a telepathic killer is to blame. Putting her career on the line, the newly-trained Psi-Judge goes undercover to bring the romance-hating murderer to justice, with the big Valentine’s Day parade coming up...

The Abyss: Sent to interrogate Moriah Blake, leader of the notorious terror group ‘Bedlam,’ Anderson gets just one snippet of information – Bedlam’s planning on detonating a huge bomb – before Blake’s followers take over the Block. It’s a race against time, and Anderson’s on her own amongst the inmates...

A Dream of the Nevertime: Anderson – a rookie no more, with a year on the streets under her belt – contracts what appears to be a deadly psychic virus, and must explore the weirdest reaches of the Cursed Earth in search of a cure. She must face mutants, mystics and all the strangeness the land can throw at her as she wrestles weird forces... 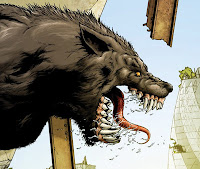 Alec Worley was a projectionist and a film critic before writing short Future Shock strips for 2000 AD and creating two original series: werewolf apocalypse saga Age of the Wolf (with Jon Davis-Hunt) and ‘spookpunk’ adventure comedy Dandridge (with Warren Pleece). He writes the Teenage Muttant Ninja Turtles comics for Panini in the UK and has also written Judge Dredd, Robo-Hunter, Tharg’s 3rillers and Tales From The Black Museum and Realm of the Damned. This is his debut prose novel.