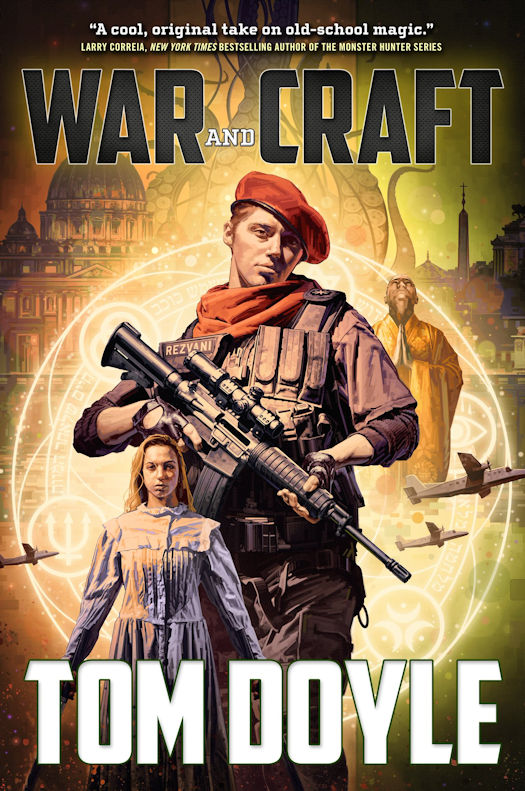 America, land of the Free…and home of the warlocks.

The Founding Fathers were never ones to pass up a good weapon. America’s first line of defense has been shrouded in secrecy, magical families who have sworn to use their power to protect our republic.

But there are those who reject America’s dream and have chosen the Left Hand Path. In this triumphant conclusion to Tom Doyle’s imaginative alternate historical America, we start with a bloody wedding-night brawl with assassins in Tokyo. Our American magical shock troops go to India, where a descendant of legendary heroes has the occult mission they’ve been waiting for.

It all comes to a head in a valley hidden high in the mountains of Kashmir. Our craftspeople will battle against their fellow countrymen, some of the vilest monsters of the Left Hand Path. It’s Armageddon in Shangri-La, and the end of the world as we know it.

Note: The cover has been revealed by the author on Twitter here. 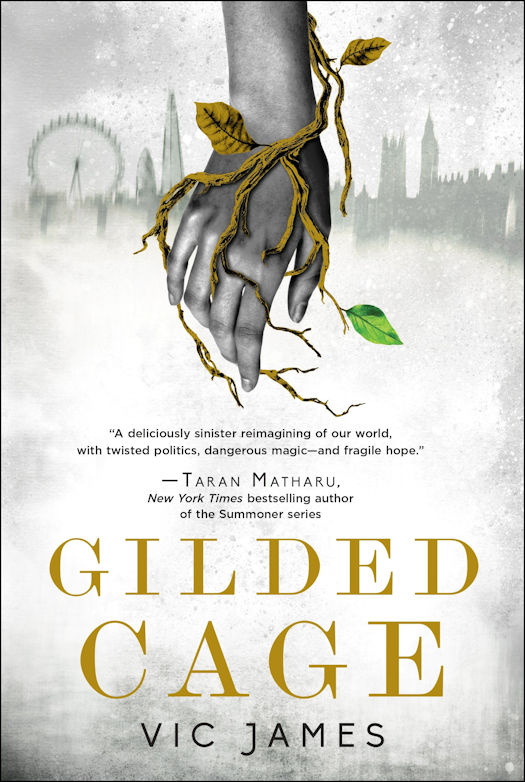 In a darkly fantastical debut set in modern-day Britain, magic users control everything: wealth, politics, power—and you. If you’re not one of the ultimate one-percenters—the magical elite—you owe them ten years of service. Do those years when you’re old, and you’ll never get through them. Do them young, and you’ll never get over them.

This is the darkly decadent world of Gilded Cage. In its glittering milieu move the all-powerful Jardines and the everyday Hadleys. The families have only one thing in common: Each has three children. But their destinies entwine when one family enters the service of the other. They will all discover whether any magic is more powerful than the human spirit. 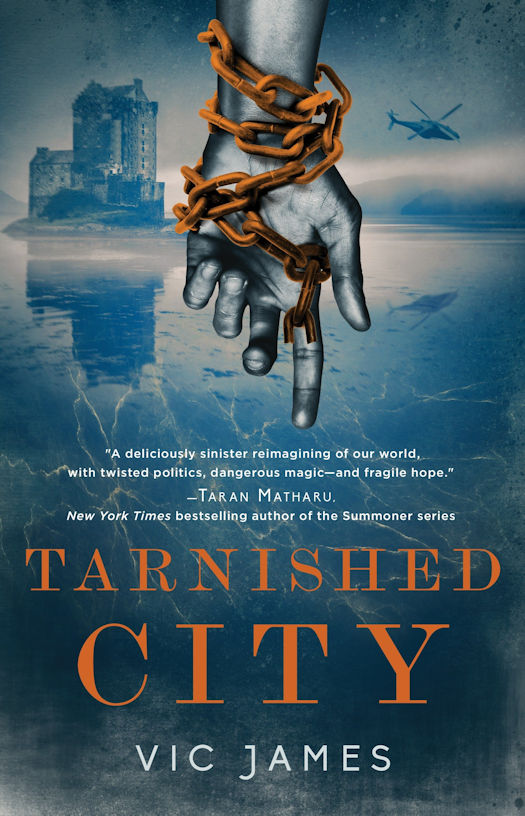 The captivating dystopian trilogy that began with Gilded Cage continues. In a modern Britain where magic users control wealth, politics—and you—an uprising has been crushed. In its aftermath, two families will determine the country’s fate. The ruthless Jardines make a play for ultimate power. And the Hadleys, once an ordinary family, must find the extraordinary strength to fight back.

Abi Hadley is a fugitive. Her brother, Luke, a prisoner. Both will discover that in the darkest places, the human spirit shines brightest. Meanwhile, amid his family’s intrigues, Silyen Jardine dreams of forgotten powers from an earlier age.

As blood runs in the streets of London, all three will discover whether love and courage can ever be stronger than tyranny.

How do you choose when you can’t save everyone? 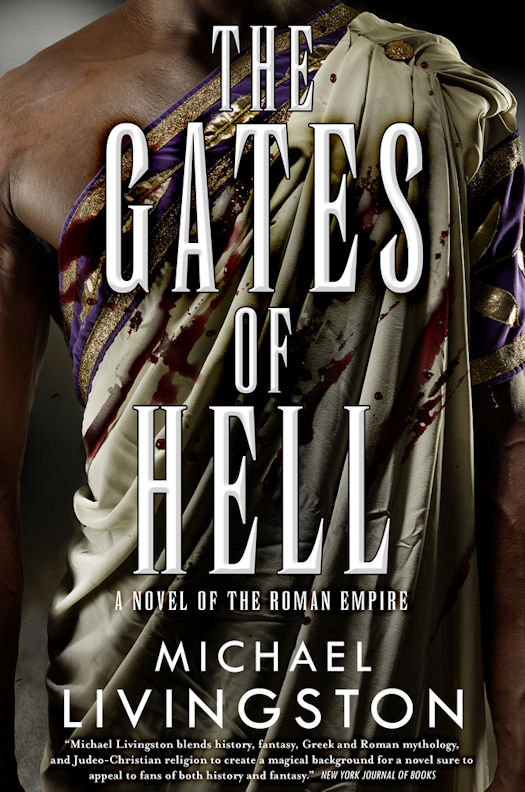 The Gates of Hell is the follow up to Michael Livingston’s amazing The Shards of Heaven, a historical fantasy that reveals the hidden magic behind the history we know, and commences a war greater than any mere mortal battle.

Alexandria has fallen, and with it the great kingdom of Egypt. Cleopatra is dead. Her children are paraded through the streets in chains wrought of their mother's golden treasures, and within a year all but one of them will be dead. Only her young daughter, Cleopatra Selene, survives to continue her quest for vengeance against Rome and its emperor, Augustus Caesar.

To show his strength, Augustus Caesar will go to war against the Cantabrians in northern Spain, and it isn't long before he calls on Juba of Numidia, his adopted half-brother and the man whom Selene has been made to marry—but whom she has grown to love. The young couple journey to the Cantabrian frontier, where they learn that Caesar wants Juba so he can use the Trident of Poseidon to destroy his enemies. Perfidy and treachery abound. Juba's love of Selene will cost him dearly in the epic fight, and the choices made may change the very fabric of the known world.

“Livingston has spiced real history with a compelling dose of fantasy! Wonderfully imaginative and beautifully told.” —Bernard Cornwell, bestselling author of The Pagan Lord, on The Shards of Heaven 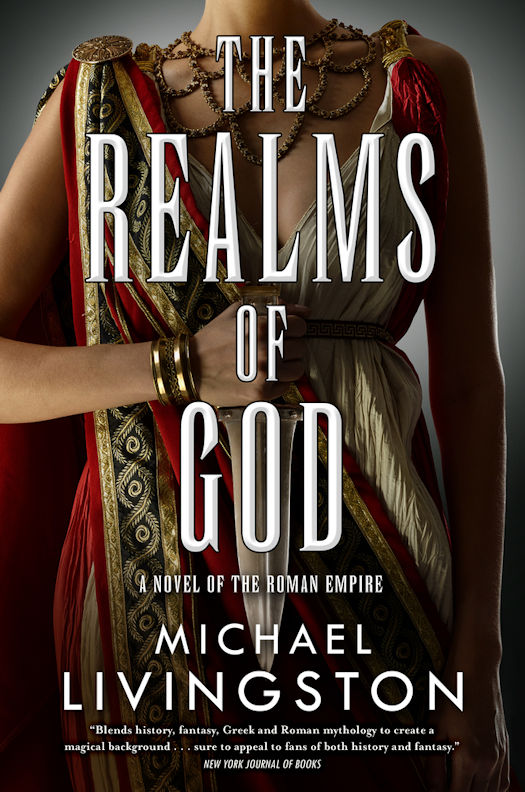 The Realms of God is the thrilling conclusion to Michael Livingston's historical fantasy trilogy that continues the story begun in The Shards of Heaven and The Gates of Hell.

The Ark of the Covenant has been spirited out of Egypt to Petra, along with the last of its guardians. But dark forces are in pursuit. Three demons, inadvertently unleashed by Juba of Numidia and the daughter of Cleopatra, are in league with Tiberius, son and heir of Augustus Caesar. They’ve seized two of the fabled Shards of Heaven, lost treasures said to possess the very power of God, and are desperately hunting the rest.

Through war and assassination, from Rome to the fabled Temple Mount of Jerusalem and on to the very gates of Heaven itself, the forces of good and evil will collide in a climactic battle that threatens the very fabric of Creation.