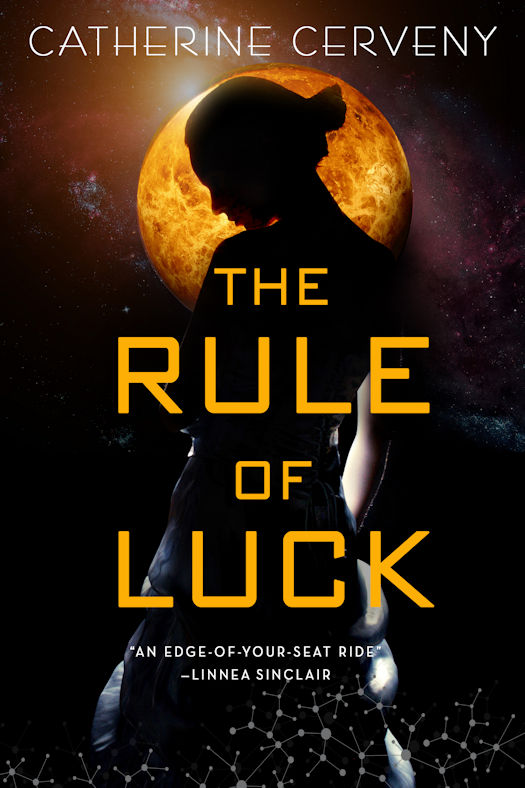 Year 2950. Humanity has survived devastating climate shifts and four world wars, coming out stronger and smarter than ever. Incredible technology is available to all, and enhancements to appearance, intelligence, and physical ability are commonplace.

In this future, Felicia Sevigny has built her fame reading the futures of others.

Alexei Petriv, the most dangerous man in the TriSystem, will trust only Felicia to read his cards. But the future she sees is darker than either of them could ever have imagined. A future that pits them against an all-knowing government, almost superhuman criminals, and something from Felicia's past that she could never have predicted, but that could be the key to saving -- or destroying -- them all.

"A compelling and intriguing read built on a fascinating premise. Cerveny's future world is richly drawn, and Felicia's and Alexei's adventure is definitely an edge-of-your-seat ride." -- Linnea Sinclair, award-winning author of the Dock Five Universe series

"A novel with depth... a terrific story." -- The Qwillery 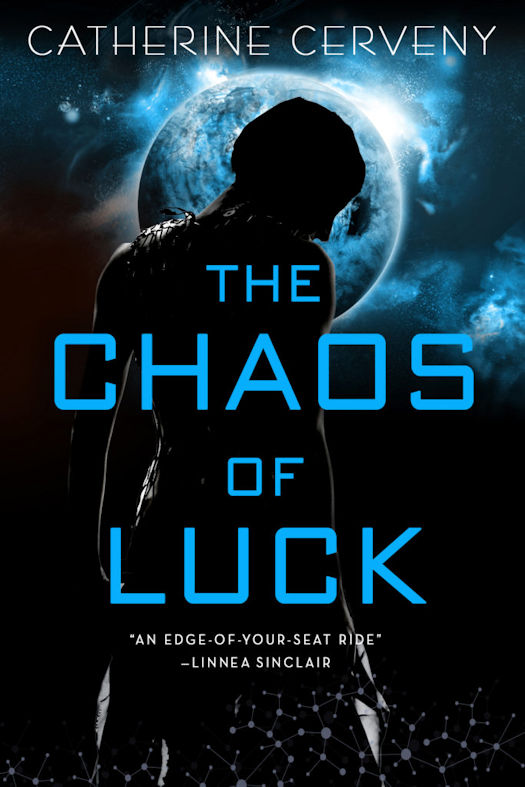 Mars, the terraformed jewel of the TriSystem, is the playground for the rich and powerful. A marvel of scientific engineering, the newly colonized world offers every luxury. For the first time in human history, the picture perfect life is possible.

Felicia Sevigny's come to the Red Planet for a fresh start. She's brought the tarot cards that have been her family's trade for generations but is hoping to leave the rest of her troubled past behind.

Felicia wants to believe that Mars will also be a clean slate for her and Alexei Petriv, notorious leader of the Tsarist Consortium, but her cards keep predicting something even darker and more insidious is ahead. Something that could mean the end, not just for her and Alexei, but for the entire TriSystem - and all of humanity.

For more from Catherine Cerveny check out The Rule of Luck.

"A compelling and intriguing read built on a fascinating premise. Cerveny's future world is richly drawn, and Felicia's and Alexei's adventure is definitely an edge-of-your-seat ride." -- Linnea Sinclair, award-winning author of the Dock Five Universe series

"A novel with depth... a terrific story." -- The Qwillery 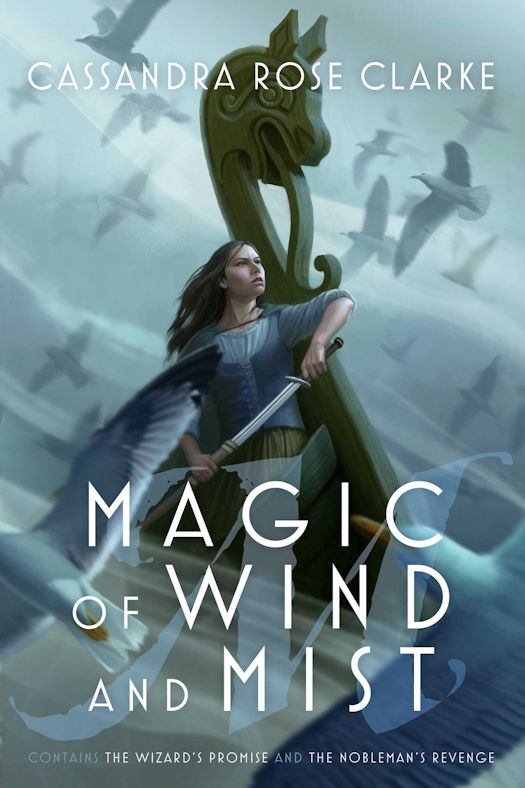 Taking place in the world of Cassandra Rose Clarke’s Magic of Blood and Sea, this is the story of a would-be witch who embarks on an adventure filled with intrigue, mystery, mermaids, and magic.

One day when Hanna is with her apprentice—a taciturn fisherman called Kolur—the boat is swept wildly off course during a day of storms and darkness. In this strange new land, Kolur hires a stranger to join the crew and, rather than heading home, sets a course for the dangerous island of Jadanvar. As Hanna meets a secretive merboy—and learns that Kolur has a deadly past—she soon realizes that wishing for adventures can be deadly…because those wishes might come true. 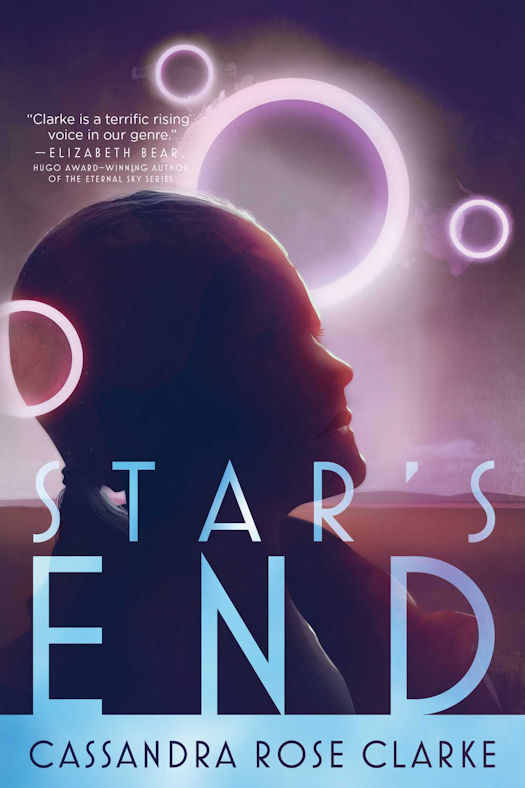 A new space opera about a young woman who must face the truth about her father’s past from critically acclaimed author Cassandra Rose Clarke.

Esme Coromina has always known that one day she would run the Four Sisters, the small planet system that her father grew into a corporate empire. Raised as the pampered heir to the company, Esme lived the best years of her life at Star’s End, the estate her father built on the terraformed moon where he began his empire. In the tropical sunlight and lush gardens, Esme helped raise her three motherless half-sisters. But as Esme is groomed to take over the family business of manufacturing weapons for the mercenary groups spread across the galaxy, she slowly uncovers the sinister truth at the heart of her father’s company. And when those secrets are finally revealed, Esme is sure that she’s lost her sisters—and part of her soul—for good.

Now, after a lifetime of following her father’s orders, Esme has a second chance. For the first time, Esme is making her own decisions, and the impact of her decisions will reverberate throughout the Four Sisters. As Esme struggles to assemble her estranged sisters for one last goodbye with their dying father, she has to choose whether she wants to follow in her father’s footsteps—or blaze a daring new path.

Cassandra Rose Clarke proves once again why she is one of science fiction’s most ambitious writers with a gripping family saga that spans years and planets. 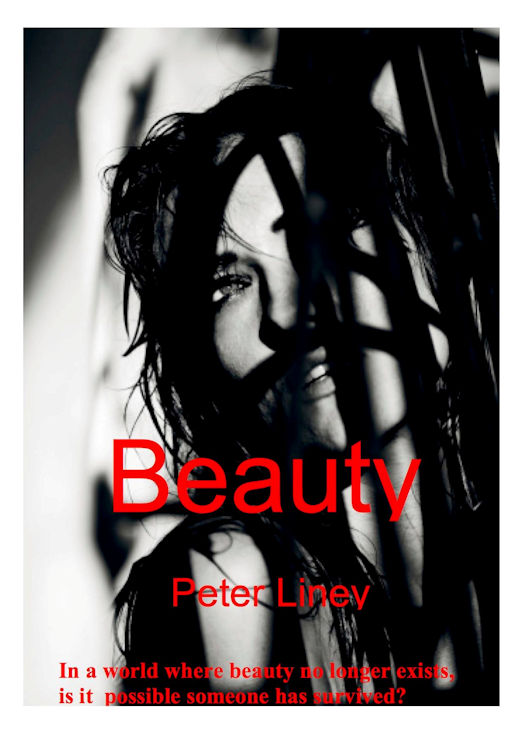 When cosmetic and transplant surgery get together and beauty becomes a commodity that can be bought and sold, the Rich become more beautiful, the Poor less. But if something can be traded, it can also be stolen – brutally, violently, by the feared face-stealers, and to a point where the rich finally cry ‘Enough! . . . Enough. Make us plain; make us ordinary.’ Now there is no beauty left, not as we once knew it, only photos, videos, exhibitions. And yet . . . you still hear the occasional rumor.