FINAL FANTASY BRAVE EXVIUS CELEBRATES FIRST ANNIVERSARY WITH LARGEST SET OF GIVEAWAYS IN GAME’S HISTORY
Promotions Include Free Character Summons, Discount Bundles, and FINAL FANTASY X Collaboration
SQUARE ENIX® is celebrating the one-year anniversary of the release of critically-acclaimed mobile RPG, FINAL FANTASY® BRAVE EXVIUS®, which boasts more than 23 million downloads around the world.  Leading up to the first anniversary on June 29, players can now participate in an exciting series of in-game promotions and giveaways, such as: 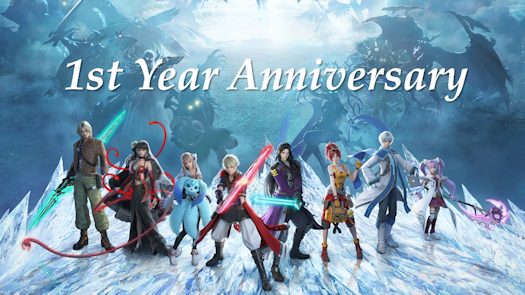 Additionally, FINAL FANTASY BRAVE EXVIUS will introduce further campaigns to all players who log in from June 29, including:

Global celebrations for the FINAL FANTASY BRAVE EXVIUS first-year anniversary, as well as the 30th anniversary of the FINAL FANTASY series, will also be punctuated by a series of Fan Festa events, kicking off with the debut event in Paris on July 8. For more information on please visit http://sqex.to/E7V.

FINAL FANTASY BRAVE EXVIUS is available now as a free-to-play app (with in-app purchases) through the App Store, Google Play and on the Amazon App Store.

This title is developed as a collaboration between SQUARE ENIX and gumi Inc. (developer of the hit title Brave Frontier). The game is available in six languages: English, German, French, Spanish, Chinese (traditional) and Korean.

About gumi Inc.
Founded in 2007, gumi Inc. (Tokyo Stock Exchange: 3903) is a leading global mobile game publisher and developer headquartered in Japan, with overseas operations in China, France, Korea, Singapore, Taiwan and the United States. The company has proven success in launching titles worldwide, such as the widely popular role-playing games Brave Frontier and Phantom of the Kill. With ongoing publishing and development projects on various platforms, including iOS, Android, and more, gumi aims to change the world through innovative entertainment products and services, including both original content and collaborations with popular IP. For more information, please visit http://www.gu3.co.jp/en/home-en/.