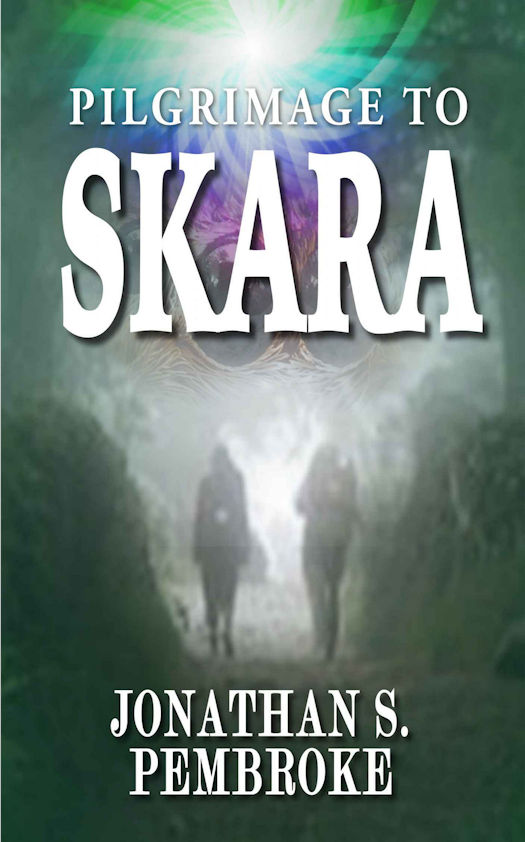 It has been nearly two decades since Pell Wendt abandoned the power and prestige of Collum. Ruled by the semi-divine Ajudicar, the city had been his home all his life, but no longer. Spurned by the woman he loved, the former pathfinder, adventurer and criminal walked away from his life of escorting promising youngsters to the shrines of power, and retreated to his farm in the Sogras, to live a life of bitter and brooding rejection.

Now, House Kettiburg has reached out with a an offer he can't refuse: a pilgrimage to Skara, a mythical and dangerous shrine far out in the barbarous Outlands, for the supplicant Keilie - the daughter of the very woman who rejected him.

Trapped by the love his heart cannot deny, Wendt agrees to the pilgrimage and finds himself embroiled in intrigue and betrayal, with far-reaching implications for himself, Keilie, and the tattered remains of the human race.

Pilgrimage to Skara by Jonathan S. Pembroke centers on the journey to Skara that Keilie, the daughter of the Baroness Kettiburg, must undertake. Baroness Kettiburg, Vyma, lives in the Hightown part of Collum and is extremely politically powerful among the other Hightown families/factions.

Pilgrimages are led by Pathfinders. In this case Vyma wants Pell Wendt who, though retired, is the best Pathfinder that ever lived. Vyma and Pell have a history - they had a multi-year relationship that ended badly and left Pell deeply shattered and heartbroken. He gave up the pathfinding life and became a farmer far from Collum. Pell still has not gotten over his love for Vyma.

Pell agrees to take Keilie to Skara - a place that no one has been to in decades. If they survive the fraught trip across dangerous lands, facing unknown challenges, dangerous monsters, and uncivilized tribes, Keilie will receive her gifts at Skara. The gift giving and the shrine at Skara are more SF-ish than Fantasy. There is quite a lot of SF in this novel.

Keilie for me was an undeveloped character. In the novel she very quickly changes from the spoiled rich girl to a much more grown up and wiser young woman... who falls in love with Pell. This despite the fact that Pell is still in love with her mother and he is old enough to be her father. In fact Pell thinks at one point that Keilie should have been his daughter. She doesn't care about his prior relationship with her mother. I have to say that this disturbed me a bit. You'll have to read the novel to see if Pell ever returns her affections.

Of all the characters Pell has the most complete backstory. He's the typical anti-hero with a bit of heart. As messed up as he is by his past and lost love, he does want to get Keilie safely to Skara and then home again. He mostly left his unsavory past behind when he began to study be a Pathfinder. However his ruthlessness has never left him and is on display throughout the story.

Many of the other characters were vaguely portrayed, but I viewed them simply as backdrop for the pilgrimage. I spent a lot of time trying to figure out what happened to the world in novel to make it the way it is. It occurred to me (and I could be wrong) that a highly advanced human civilization destroyed itself most likely with weapons that cause radioactive fallout - journeying outside the protected areas causes the Boiling Death, which, when finally described in the novel, sounds a lot like radiation sickness. An area that abuts a huge ocean is glass (nuclear weapons tested in desert areas turned sand mostly comprised of quartz to glass, etc.). I found the worldbuilding very interesting and would have loved to learn a bit more about what happened in the past to create this post-apocalyptic world.

Nonetheless, the pacing is quite good and there are several well done battle and fight scenes. There are some intriguing political machinations that take place in Hightown but are given too short shrift for me. Pilgrimage to Skara is a novel with a lot of promise and is a mostly enjoyable and quick read. 5/10
Posted by Qwill at 5:30 AM