PORTLAND, OR, 03/07/2018 — Image Comics is pleased to reveal an all-new variant cover of the debut issue of Brenden Fletcher and Karl Kerschl’s ISOLA provided by series artists Kerschl and Msassyk. Each issue of this lush fantasy series will boast a Cover A and a Cover B, featuring art from the series artists.

The kingdom of Maar is in peril. Rook, the captain of the Royal Guard, has fled the capital with Queen Olwyn. Together, they seek the fabled land of the dead, where lies their best hope of restoring the kingdom—and the Queen herself.

“ISOLA is brilliant! An atmospheric and intriguing story with masterful art.” —Frank Quitely

“ISOLA is one of the most beautifully illustrated North American fantasy comics I’ve ever seen. It mixes European and Japanese influences with Fletcher and Kerschl’s considerable charm to make something new and exciting.” —Tim Seeley

“ISOLA is an original fantasy world brought to life with breathtaking art. You can feel the blood,
grass, and fur. A stunner from the get-go.” —Annie Wu

“This book is beautiful! It reads like a really high-end animation production!” —Dustin Nguyen

“I have been waiting greedily for ISOLA, and it’s everything I ever wanted. Beautiful, lush, heartfelt, and dangerous. Brenden Fletcher and Karl Kerschl are at the top of their game with masterful storytelling and an intriguing epic. Every panel hums with life and energy and reminds us that there are still magical worlds to escape to...if we can find them.” —Patrick Gleason

“Praise be to Karl KerschI and Msassyk! ISOLA is one of the best-looking comics I've seen in years. Engrossing, warm, inspiring work; I love it.” —Tradd Moore

“I had a chance to read ISOLA #1 and it is everything my Mononoke-loving heart could want. April can't come soon enough.” —Jen Bartel

“All kinds of wonderful. As if Hayao Miyazaki remade The Jungle Book with a dollop of Kamandi. Highest possible recommendation. This is a phenomenal book and unlike anything else on the stands. This'll be an instant sell-out for sure.” —Christian Ward 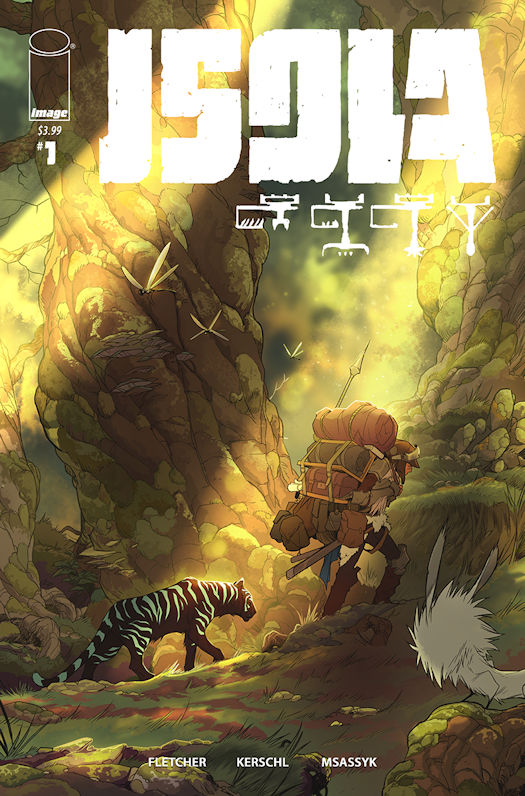