Please welcome David Michael Ares to The Qwillery as part of the 2018 Debut Author Challenge Interviews. Dayfall is published on March 13th by Tor Books. 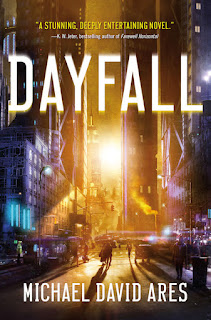 Michael:  An old west story called “Harvey Jones, Thief” at age 6. It included some “illustrations” (if you can call them that) that were little more than stick figures.

Michael:  Definitely a plotter. “Winging it” scares me.

Michael:  The (usually) low amount of income, which causes other difficulties like motivation and making time to write.

Michael:  All the great books and movies I’ve scanned into my nearly photographic memory over the years since I was a child, and the better parts of the bad ones.

Michael:  Inspired in part by Isaac Asimov’s classic story Nightfall, Dayfall is a neo-noir Training Day with a touch of Philip K. Dick.

TQ:  Tell us something about Dayfall that is not found in the book description.

Michael:  It features a plethora of really cool Manhattan locations, most of which are real places. Those settings and the dark/light/ultraviolet visual themes would make for a great-looking movie.

TQ:  What inspired you to write Dayfall? What appealed to you about writing an SF / neo-noir thriller?

Michael:  I love classic noir, especially the Philip Marlowe novels by Raymond Chandler (The Big Sleep, The Long Goodbye, etc.). But as much as I love re-reading them, they can’t be re-written, so “neo-noir” is the way to go for authors like me. And since I also love science fiction with a psychological bent, like the early works of Alfred Bester and Philip K. Dick, those kinds of elements were a perfect way for me to add the “neo” to my noir.

TQ:  What sort of research did you do for Dayfall?

Michael:  I did a lot of scientific reading to find out what would happen to Manhattan (and other Northern Hemisphere cities) if there was a nuclear conflagration between Pakistan and India , and I combed the Big Apple to find those really cool locations I mentioned.

TQ:  Why did you set the novel in Manhattan?

Michael:  Because it has those really cool locations, like the Flatiron Building that houses the Macmillan/Tor offices! Also, New York is a great place to start a series, and in my near-future world it is the first major city (before London, Paris, Berlin, and Moscow) where the Dayfall occurs.

TQ:  Please tell us about the cover for Dayfall.

Michael:  I love the cover, and I’m proud to say that I’m the one who came up with the idea to use an image of the Manhattan Solstice (or “Manhattanhenge,” as it’s often called). That‘s already such an amazing visual phenomenon, and in the world of the novel it takes on the additional qualities of mystery (what’s gonna happen?) and menace (will it be really bad?).

TQ:  In Dayfall who was the easiest character to write and why? The hardest and why?

Michael:  The easiest was Jon Phillips, the main protagonist, because he’s young and idealistic enough to be rather single-minded in his goals and motivations (at least in the first half of the story). The hardest was Jon’s enigmatic partner Frank Halladay, because it was a challenge to depict him as “rude, crude, and socially unacceptable” without making him too unlikeable or telegraphing which side he’s really on.

Michael:  I didn’t intentionally include social issues—I just wanted to tell a good story—but they are a part of life, so they have a way of cropping up. Some have said that the wealthy industrialist Gareth Render, who wants to run the city, is reminiscent of Donald Trump. That was actually not intentional on my part, but in hindsight there are definitely some similarities between the two. And I think the primary sociological/political lesson illustrated in the novel is: “Don’t put your trust in princes,” because they’ll always let you down.

TQ:  Which question about Dayfall do you wish someone would ask? Ask it and answer it!

Michael:  Are the movie rights available? The answer is yes, and it would translate to the screen very well!

TQ:  Give us one or two of your favorite non-spoilery quotes from Dayfall.

Michael:  “In an eerie twist of fate, the 9/11 memorial had been prophetic as well as commemorative, because its inverse fountains conjured images of the buildings descending into a watery grave.” “Love is blind, Detective Phillips, and sex makes you stupid…there’s a reason for those clichés.”

Michael:  I’m hoping to put out a series of sequels to Dayfall that will be set in London, Paris, Berlin, and Moscow as the sunlight returns to those cities for the first time, and explore some of the interesting themes that were introduced in the first novel. Then I’d like to publish another series of novels set in the not-so-near future (about 50 years from now) and a third series set in the more distant future, all of which will have connections to one another in an epic literary world called the Exos Universe. 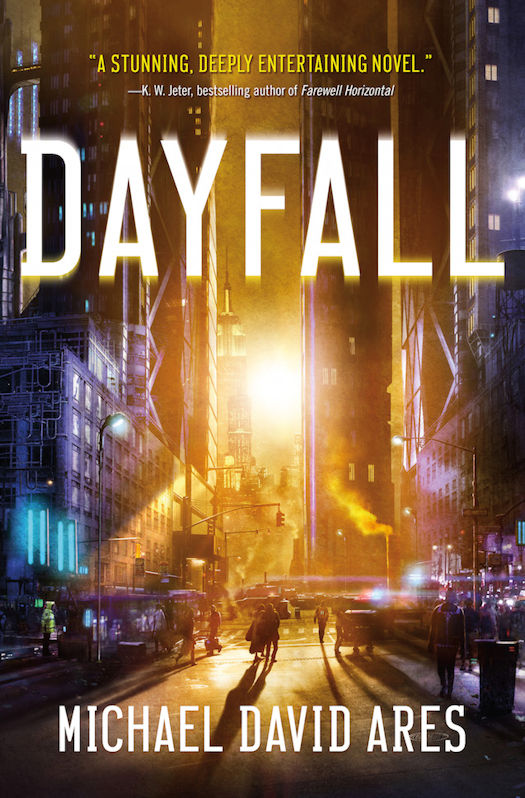 In the near future, patches of the northern hemisphere have been shrouded in years of darkness from a nuclear winter, and the water level has risen in the North Atlantic. The island of Manhattan has lost its outer edges to flooding and is now ringed by a large seawall.

The darkness and isolation have allowed crime and sin to thrive in the never-ending shadows of the once great city, and when the sun finally begins to reappear, everything gets worse. A serial killer cuts a bloody swath across the city during the initial periods of daylight, and a violent panic sweeps through crowds on the streets. The Manhattan police, riddled with corruption and apathy, are at a loss.

That's when the Mayor recruits Jon Phillips, a small-town Pennsylvania cop who had just single-handedly stopped a high-profile serial killer in his own area, and flies him into the insanity of this new New York City. The young detective is partnered with a shady older cop and begins to investigate the crimes amidst the vagaries of a twenty-four hour nightlife he has never experienced before. Soon realizing that he was chosen for reasons other than what he was told, Jon is left with no one to trust and forced to go on the run in the dark streets, and below them in the maze of the underground. Against all odds he still hopes that he can save his own life, the woman of his dreams, and maybe even the whole city before the arrival of the mysterious and dreaded event that has come to be known as…. DAYFALL.

MICHAEL DAVID ARES is an entrepreneur and educator who has started four community service businesses while writing and editing books for other people on the side. He is now a full-time author, and lives with his family in West Chester, Pennsylvania. Michael is the author of Dayfall.