GIDEON FALLS #1 Rushed Back to Print

NEW LEMIRE, SORRENTINO HIT GIDEON FALLS RUSHED BACK TO PRINT SAME DAY AS RELEASE
PORTLAND, OR, 03/07/2018 — The creative team behind Green Arrow and Old Man Logan—New York Times bestselling and Eisner Award winning writer Jeff Lemire (ROYAL CITY, DESCENDER) and critically-acclaimed artist Andrea Sorrentino—launched GIDEON FALLS today to critical acclaim and served fans another breakout hit. Issue #1 of the highly anticipated horror/mystery series is being rushed back to print on the same day as its release in order to keep up with overwhelming customer demand.

In GIDEON FALLS, the lives of a reclusive young man obsessed with a conspiracy in the city’s trash, and a washed up Catholic Priest arriving in a small town full of dark secrets become intertwined around the mysterious legend of The Black Barn, a otherworldly building that is alleged to have appeared in both the city and the small town, throughout history, bringing death and madness in its wake.

GIDEON FALLS #2 Cover A by Sorrentino (Diamond FEB180628) and Cover B by Cliff Chiang (Diamond Code FEB180629) will be available on Wednesday, April 11th. The final order cutoff deadline for comics retailers is Monday, March 19th. 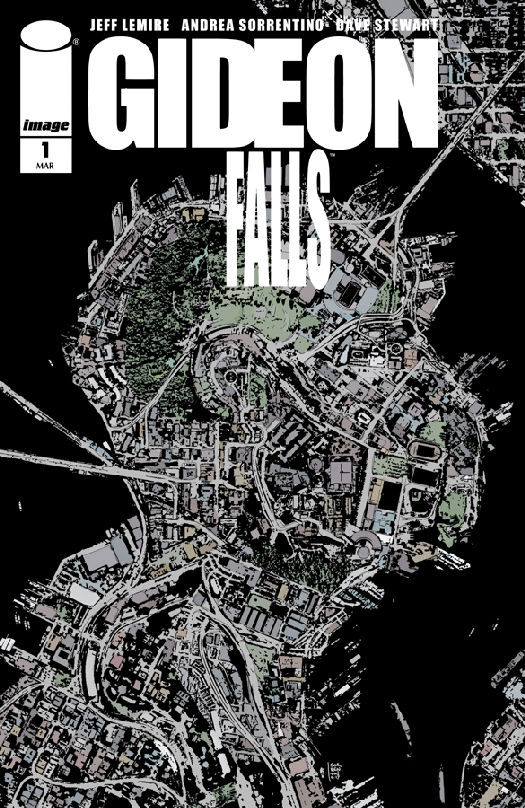 ABOUT IMAGE COMICS
Image Comics is a comic book and graphic novel publisher founded in 1992 by a collective of bestselling artists. Image has since gone on to become one of the largest comics publishers in the United States. Image currently has five partners: Robert Kirkman, Erik Larsen, Todd McFarlane, Marc Silvestri, and Jim Valentino. It consists of five major houses: Todd McFarlane Productions, Top Cow Productions, Shadowline Comics, Skybound Entertainment, and Image Central. Image publishes comics and graphic novels in nearly every genre, sub-genre, and style imaginable. It offers science fiction, fantasy, romance, horror, crime fiction, historical fiction, humor and more by the finest artists and writers working in the medium today. For more information, visit www.imagecomics.com.
Posted by Qwill at 5:25 AM